The zero-emission scooter comes with a reverse gear, touchscreen controls and a digital assistant 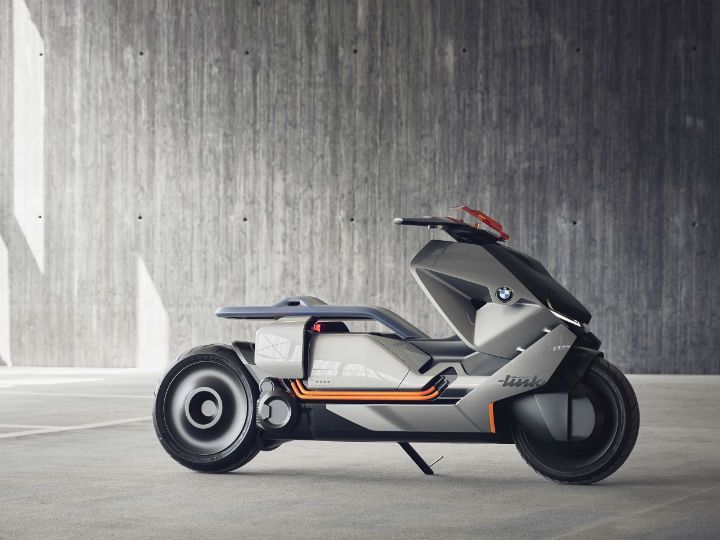 BMW Motorrad has been reinventing two-wheeled mobility solutions through the concept series called BMW Motorrad Vision Next 100. After coming up with a motorcycle that looks like the Batpod (originally named as The Great Escape), BMW has developed something radical for scooter lovers. Christened BMW Motorrad Concept Link (could’ve been named better, if you ask me.), the scooter aims to incorporate digital connectivity to enhance urban mobility on two wheels. Also read: BMW Motorrad Previews Vision 100 Concept Motorcycle

Explaining the concept scooter, Edgar Heinrich, head of design of BMW Motorrad says, “The BMW Motorrad Concept Link stands for a new understanding of urban mobility. It links the digital and analogue world and places the focus on the rider and his mobility needs. In the way it links functionality and digitalisation it performs both as a means of transport as well as a communication device. For me the BMW Motorrad Concept Link, with its timeless and reduced style, is more than a concept – it is rather a symbol for a new era.”

Interestingly, the design language of the scooter bears resemblance to two-wheeled creations in Japanese Manga. The bulbous, sloping front apron houses the BMW logo on the sides and it is surrounded with a lot of design elements in the form of creases, cuts and slashes. The wheels are covered and the rear doughnut-shaped wheel is mounted on a single-sided swingarm and is driven by a belt drive. Speaking of the powertrain, the scooter is powered by the flat batteries stored in the underfloor compartment, and the compact electric motor is at the rear. They are connected by distinct and fat orange cables which are exposed on the right side. The electric drive is tuned to offer better acceleration and easy handling, optimised for urban usage. The low seat can be adjusted length-wise and underneath the bench seat lies a storage compartment which closes using a sliding door. The scooter also has a reverse gear to help the rider take the it out of tight parking spots. Pretty cool, no? Also, the side panels and the windshield can be customised according to the rider’s taste.

The scooter also comes with an intelligent digital assistant. The AI is capable of pairing up with the rider’s digital space and checking the calender for his/her next destination. It also gives the rider an option to choose between the fastest or the most scenic route to take. Additionally, it can also select the apt music for the ride. To maintain the sanctity of no-frills riding, information such as speed, navigation and battery level are projected directly into the rider’s field of vision, thus avoiding the need to look away from the road. Additionally, there’s a large touch-sensitive surface panel below the handlebars using which the rider can control infotainment, connectivity and route information. The touch-sensitive buttons on the handlebar are freely programmable for quick access.

The tech-laden scooter comes with an equally clever and snazzy-looking jacket. One can open or close the scooter’s storage compartment via a motion on the arm of the jacket. The water-repellent jacket also subtly houses shoulder and elbow protectors so that it’s actually functional as well.