As part of BMW's centenary celebration, the concept reveals the plausible future of two-wheeled mobility 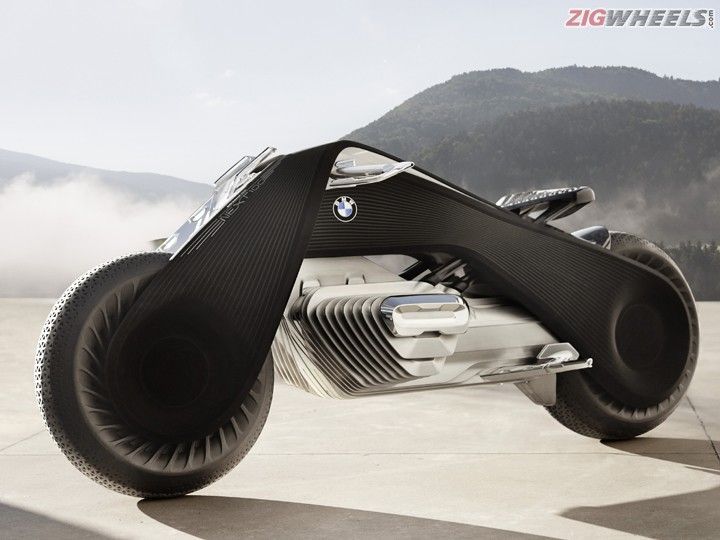 The BMW Group completed 100 years of existence this year and among many things, the celebrations included concepts from their automotive marquees like Mini, BMW and Rolls Royce. Concepts not built for the immediate future but as a glimpse of the evolution of automobiles over the next century. So today, BMW Motorrad – the motorcycle division of the BMW group came up with their own version of the future of two-wheeled mobility. The concept breaks new ground on several fronts like frame design and the idea to completely do away with the idea of the rider using a helmet or protective gear.

The bike frame or flexframe as BMW calls it, completely turns around the science of bike building. Traditional rigid frames make way for a single piece flexible frame that connects both wheels. The frame deals with the idea of turning around corners by adjusting (or deliberately flexing) the frame. A preposterous idea in today's times where chassis rigidity defines how well a bike will handle. The lack of moving parts also should bring forth the issue of ride quality. This too is taken care of by the flexible frame also assisted by the tyres. The tyres get a variable tread that changes in accordance with weather and road conditions.

The future is electric. At least that's what BMW thinks as its vision concept gets a zero emission powertrain (electric for now). The motor is a compact unit when the bike is stationary but has fins extending outward to resemble BMW's trademark Boxer twins layout. The extensions might be for an aesthetic purpose but possibly can serve up as cooling fins.

The minimalist and rider connected design theme has the information moving to a wearable visor (basically a large pair of sunglasses) which displays all relevant information and rider aids like warnings. For example, it will show the rider when he approaches the maximum lean angle. The information with not just be visual but haptic as well. This is made possible via intelligent rider gear made of advanced lightweight materials that will shield the rider against wind and rain. The suit will have micro-openings that would allow for maximum ventilation as and when required. The suit will be able to monitor the riders health via inbuilt sensors while vibrating pads on the arms and legs convey navigation instructions and alerts to the rider.

BMW proclaims that riders in the future will not need helmets or any form of protective gear. This will be made possible via technology that is intelligent enough to predict situations on the road and alert the rider and at times, take over controls from the rider, Kind of a semi-autonomous motorcycle really. It also has an auto balance feature which besides negating the need for a side stand will balance the bike on turns as well. This means that you have a bike which will not crash at all.

All this might sound like a pipe dream given our road conditions and the certainty of an animal or pedestrian coming our way, but don't discount it just as yet. Honda has recently revealed an airbag prototype for phones that detects the phone falling and activates around the phone creating a safe cushion all around it. What is to say that we will not see this concept turn into a reality and trickle down into bikes?