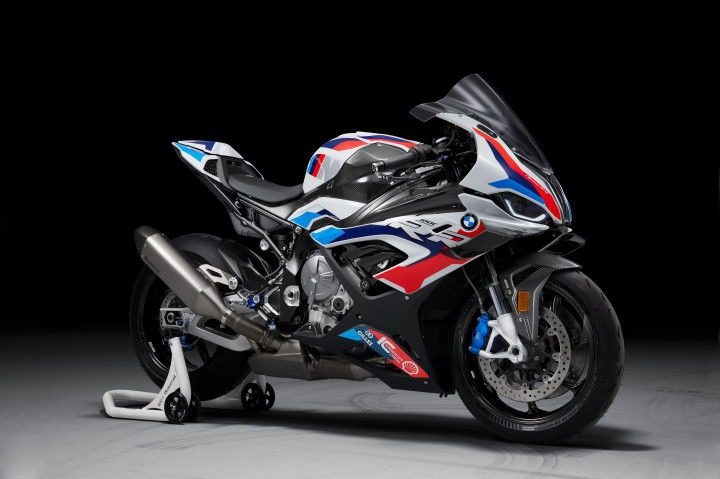 Technology has driven two-wheeler manufactures to push the envelope beyond what’s imaginable. The result has been a new breed of aerodynamically designed superbikes that can slice through air at over 200kmph. We’ve already witnessed the Italians pull this off with the Ducati Panigale V4 Superleggera and 2021 Aprilia Tuono V4 X. And now, the Germans want in on the action too with the BMW M 1000 RR, the first ‘M’ model based on the S 1000 RR. It gets MotoGP inspired winglets, lighter engine components and top-shelf hardware.

As if 206PS wasn’t enough, the Bavarians thought it would be better to add a few extra ponies and push the power output to a staggering 212PS! This now comes in at 14,500rpm, 1,000rpm more than before. Its torque output, although similar to the standard model at 113Nm, now kicks in a lot earlier to deliver a meatier mid-range. To be more specific, the M 1000 RR makes most of its power between 6000rpm to 15,100rpm, which according to BMW is most useful on the track.

BMW has managed to extract more performance from the 999cc, inline four-cylinder motor by using lighter components. This includes forged 2-ring pistons with titanium connecting rods, slimmer and 6 percent lighter rocker arms, machined intake ports with titanium valves and revising the compression ratio (13.5:1). And then there’s the new full titanium exhaust system that’s around 3.6kg lighter than before. Overall, the bike manages to shed 1.5kg (192kg kerb) over the Pro M Sport (193.5 kg) and 5kg over the standard model, which tips the scale at 197kg kerb.

All this power requires some extra downforce which comes with BMW's M-winglets. The bike also allows you to tuck in better thanks to the new, taller, track-oriented windscreen. Adding an extra layer of safety is BMW’s comprehensive electronics package which includes five riding modes: Rain, Road, Dynamic, Race, Race Pro1-3, dynamic traction control (DTC), anti-wheelie, shift assist pro, cornering ABS, launch control, pit-lane-limiter and hill-start control pro, all of which are monitored via a 6-axis IMU.

At the centre lies a bridge frame made from aluminium which has been designed to offer the best possible lap times on the race track. BMW has also extended adjustability of the swinging arm pivot point. Further improving its handling is the reworked central spring strut in the upside-down fork, blue spring and Full Floater Pro kinematics. BMW says the mechanicals have been tweaked to deliver better drivability, braking and as well as prevent the bike from squatting.

The M 1000 RR features M brakes derived from WSBK (World Superbike Championship) which have been designed to offer much better braking performance. While the dimensions of the rotors remain unchanged, the calipers come finished in blue anodised coating and ‘M’ logo. Adding to the weight loss are a pair of carbon wheels.

While the user interface and design of the 6.5-inch TFT display remain unchanged, it now has a few extra tricks up its sleeve. For instance, the console now features an M start animation, an activation code, M GPS laptrigger and M GPS data logger over and above the standard readouts.

And then there’s the ‘M’ competition pack:

BMW Motorrad will be offering the ‘M’ competition pack alongside the standard M RR trim for those of you who are bonkers enough to pay more. What you get is an M GPS laptrigger and activation code, M milled parts package, M carbon package, silver 220g lighter swinging arm, DLC-coated M endurance chain and a pillion seat cover.

The price for both the variants are yet to be announced, but rest assured it’s bound to cost you an arm and a leg. Considering the kind of equipment the M 1000 RR packs, we think it'll be priced around Rs 44 lakh - 46 lakh (ex-showroom).