This New Toyota Corolla Hybrid Could Be India-bound

Powering the hybrid Corolla is a 1.8-litre petrol engine and an electric motor for a combined output of 121PS 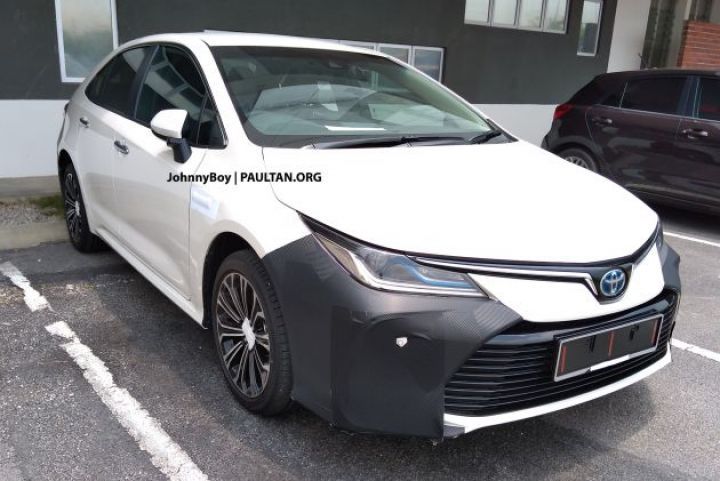 Toyota is again in the spotlight right after the RAV4 plug-in hybrid’s global reveal. This time around, the 2020 Corolla Hybrid has been spied while on test in Malaysia. The 12th generation Corolla was first unveiled in November 2018, while we still get the older generation dubbed the Corolla Altis in India. The new Corolla is expected to be launched in India by early next year but the hybrid version’s debut remains a question. The Corolla Altis is currently priced from Rs 16.45 lakh to 20.19 lakh (ex-showroom, Delhi). The upcoming Corolla is expected to carry a premium as it will be offered with BS6-compliant powertrains and, being based on a new TNGA platform, will have a bigger footprint.

Spied with a fair bit of camouflage, the hybrid version looks similar to the standard sedan. The changes that give out its green intentions are the blue accents inside the headlight and the Toyota logo. Further cementing its hybrid underpinnings are the interiors which can be seen with an EV mode button. Yes, the cabin of the sedan was also spied and it looks similar to the conventional fossil fueled version.

Toyota already has the hybrid version on sale in various other markets. The sedan uses a 1.8-litre 4-cylinder engine good for 98PS and 142Nm of twist. Not exactly the ideal output figures, right? But paired up with the electric motor, the combined output figure goes up to 121PS. This figure is sent to the front wheels with the help of a CVT.

Some kit expected to be offered are a 7-inch infotainment system, drive modes, smart key and 8 airbags. Another fun fact is that Toyota has the same sedan with two different styling for different markets. We are expected to get the European version that was also recently launched in Malaysia.

The upcoming Auto Expo might also be a venue for unveiling the new Corolla in India. Other engine options on offer include a 2.0-litre petrol with 169PS and a 1.8-litre petrol with 139PS on tap. Toyota’s powertrain options for India, though, are still in the dark. When launched, expect it to rival the new Hyundai Elantra, Honda Civic and the Skoda Octavia.

In other news, Toyota is also strengthening its partnership with Maruti Suzuki for developing autonomous and electric vehicles for the near future.