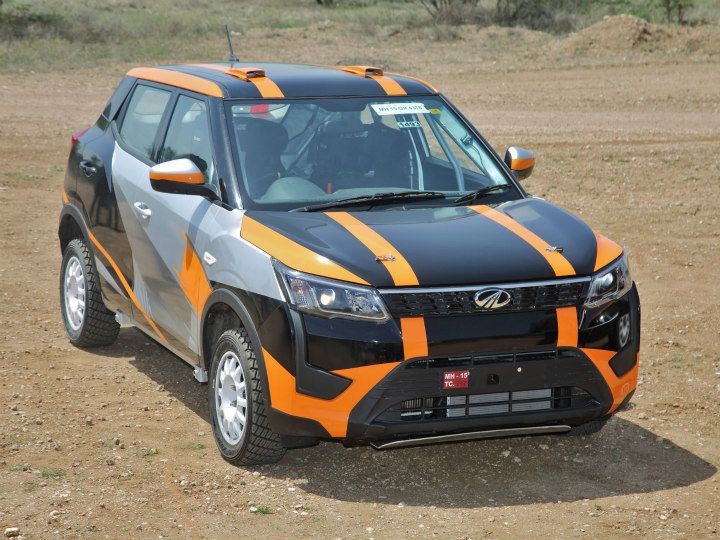 Days before the 2019 Indian National Rally Championship kicks off, Mahindra has unveiled its rally challenger for the season - the SuperXUV300. The SuperXUV300 will replace the ageing SuperXUV500 which has been in use since 2013.

The SuperXUV300 has been rally prepped by Arka Motorsports and features a black-heavy colour scheme with silver and orange decals. Mechanical changes include forged alloy wheels, suspension upgrades that include proper rally-spec Reigers, stripped out interiors, and a rally spec roll cage. Other changes include racing seats, four-point seatbelts, a rally-spec handbrake, a racing steering wheel and aluminium pedals.

Under the hood, the SuperXUV300 will utilise the same 1.2-litre turbo-petrol and 1.5-litre turbo-diesel engine as the production-spec model. However, the petrol motor gets a bigger turbo, reworked intakes and an exhaust system while the turbo-diesel motor remains largely unchanged aside from an engine remap. Both variants, for now, utilise the same 6-speed gearbox as the production car but may be upgraded as the season progresses.

The two XUV300s will be piloted by Gaurav Gill and Amittrajit Ghosh, the former driving the petrol and the latter the diesel. Unlike previous seasons, the two driver  be using different tyres - Gill’s car will run on JK tyres, while Ghosh will use MRFs.

The SuperXUV300 is lighter and expected to be more nimbler than the SuperXUV500. But its toughness and durability will be tested to the max during the 2019 INRC season. The SuperXUV300 has already undergone a successful shakedown at Coimbatore and will be competing in Chennai for Round 1 of the 2019 Indian National Rally Championship