Try again
Alert Me When Launched 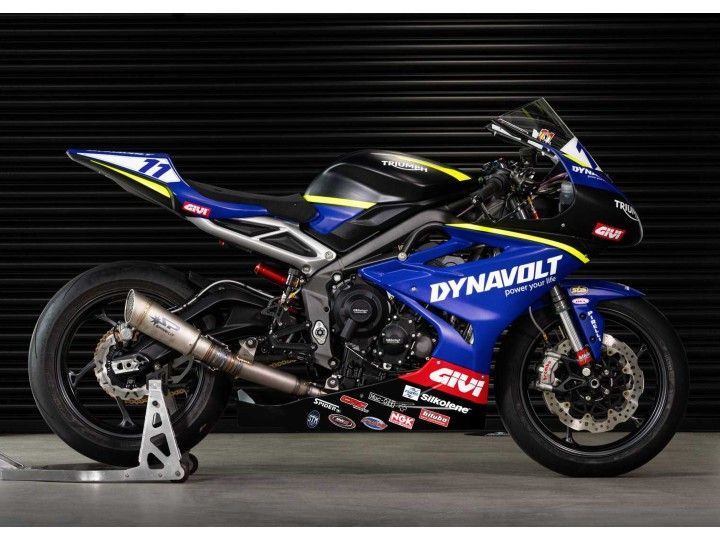 As a personal fan of Triumph’s Daytona 675, it was a bummer when it got dropped from the bikemaker’s lineup altogether. However, it seems Triumph isn’t really done with it yet. The bikemaker has unveiled its contender for the 2021 British Supersport championship and it is inspired from the Daytona!

The bike will run under the Dynavolt Triumph racing team and onboard it will be former WSS British rider Kyle Smith and former British MotoStar champion Brandon Paasch.

Essentially a Street Triple 765 RS underneath, the race bike uses the Daytona’s bodywork and looks as beautiful as it did years ago in its production form. The bodywork is mainly blue/black with hints of neon green along with Dynavolt graphics and sponsor stickers. As expected, it is not road-legal and is solely built to do one thing: obliterate track records.

And there are numerous components that help it achieve that. Race-spec clip-ons, rear-set footpegs, a full-system racing exhaust from Spark.it, fully adjustable race suspension from Bitubo, and an extensive braking setup with braided lines and petal discs to name a few.

But major components like the fuel tank, engine, and the perimeter frame have all been left untouched. In its stock BS6 avatar, the Street Triple’s 765cc inline-three motor puts out an impressive 123PS and 79Nm. This is exactly why the Street Triple 765 RS was chosen as a blueprint for this project.

Triumph’s official statement reads, “The basis of the Dynavolt Triumph 765 is the Street Triple RS, a bike that has had significant global sales success and which is appreciated for its class leading handling and exhilarating, torque rich engine”. Even we had similar views about the Street Triple when we rode it in 2019.

To wrap up, we’re sure that the race-prepped Street Triple will be a contender for pole position from the get-go, since Triumph’s 765 platform has already demolished lap records in the Moto2 world championship. Also, we hope this makes the bikemaker rethink its decision to sack the Daytona, and bring it back on our roads!