In this latest installment of our performance report, we bring two popular strong-hybrid cars to find out which one is more efficient and quicker. 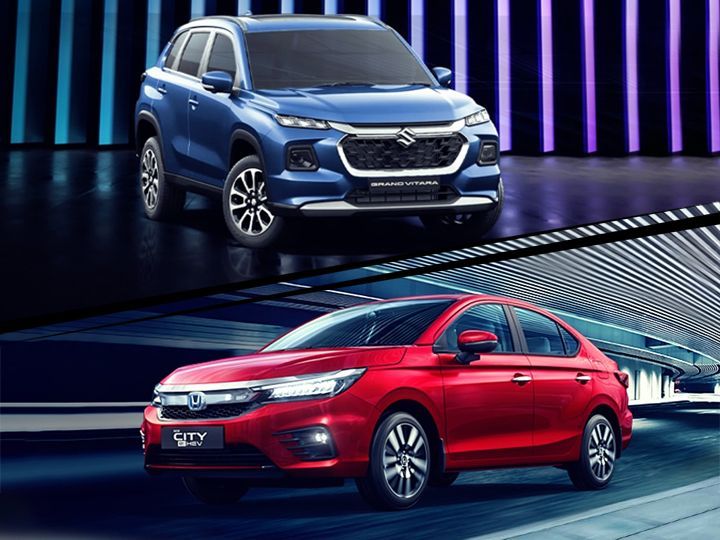 Hybrids are slowly gaining steam in the Indian market, and in this report, we have brought two popular cars: the soon-to-be-launched Maruti Suzuki Grand Vitara and the Honda City Hybrid. Our objective is to find out which one sips the least amount of fuel and which one is quicker when you decide to give it the beans. So without further ado, let’s get down to business.

The Grand Vitara gets a Toyota-sourced, three-cylinder powertrain, while the Honda gets a four-cylinder unit. On paper, it’s the City that has the superior specs as it’s 10PS more powerful and way torquier than the Grand Vitara. Both models drive their front wheels via an e-CVT.

Hybrids are known for their incredible fuel efficiency, so this time around we tested both the models for their mileage first. After trundling around in town for around 50km and on the highway for 100km, here are the results:

In town, the Grand Vitara’s slightly less powerful powertrain is more than 5kmpl more fuel efficient than the Honda City Hybrid. This is because the Grand Vitara is happier to sit in pure EV mode and switches electric power more frequently than the Honda City. However, the City Hybrid’s more relaxed nature on open roads means it’s the more efficient model on the highway. The higher torque output from the Honda keeps the engine less stressed at our highway test speeds and this allows it to be more efficient as well.

Also Read: Maruti Suzuki Grand Vitara 2022 Review: Does It Live Up To The Hype?

What About Going Fast?

Yes, Hybrids are known for fuel economy, but how are these cars when you want to have some fun? Well, here are the stats:

The Honda City’s more powerful powertrain means it’s the quicker one in the nought-to-100kmph dash. And even though we tested the Grand Vitara in wet conditions, it still wouldn’t have been able to beat the City’s times. Once the battery juice runs out, it's the City's engine, which has much better performance and keeps pulling at higher rpms. The Maruti's engine feels flat and runs out of steam rather quickly. The more realistic way to look at this is in the roll-on acceleration, and as you can see, the Honda is the quicker one here as well by a comfortable margin.

Also Read: Honda City e:HEV Hybrid First Drive: Who Is It For Really?

In the confines of this test, the Grand Vitara comes across as the more fuel efficient model, while the Honda City Hybrid is more economical and fast on open roads. So it makes sense that we call this test a tie. In our next report, we’ll be comparing the Grand Vitara’s mild and strong-hybrid powertrains, so stay tuned.