You Can Now Check Out The 2022 Toyota Hyryder At Dealerships 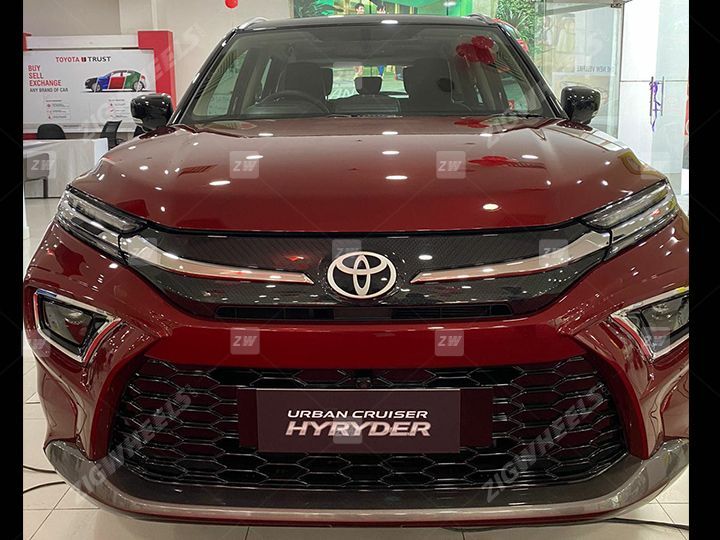 The Toyota Urban Cruiser Hyryder has started reaching dealerships after its global unveiling on July 01. Pre-launch bookings are underway for a token of Rs 25,000, and the compact SUV will be available in four variants: E, G, S, and V. Toyota’s upcoming compact SUV will go on sale by August and lock horns primarily with the Hyundai Creta.

Starting with the design, the Hyryder looks beefy and definitely impresses at first sight. It gets a sleek closed-off grille, flanked by a pair of split LED headlights. In profile, the SUV gets flared squared off wheel arches that are nicely filled by the 17-inch alloys. Its overall silhouette is also boxy, giving it a nice SUV-like vibe. Sleek split-LED tail lights round off the overall design.

Inside, the dashboard design is upmarket and is further accentuated by the black/brown theme (hybrid only). Plus, to spruce up the overall design, there’s a soft touch plastic trim that runs across the width of the dashboard. It also comes with a free standing 9-inch touchscreen infotainment system that has been carried from the Baleno and Brezza.

The Toyota Urban Cruiser Hyryder gets a 1.5-litre petrol engine with mild and segment-first strong hybrid options. The former is a Suzuki unit, while the latter is a Toyota unit. Moreover, the Hyryder also gets first-in-class all-wheel drive with the mild-hybrid engine.

Prices of the Hyryder are expected to begin around the Rs 9.5 lakh mark. Apart from the Creta, the Toyota SUV will lock horns with the Kia Seltos, VW Taigun, Skoda Kushaq, MG Astor, and the upcoming Maruti compact SUV.