Toyota’s Urban Cruiser Hyryder ticks all the boxes it should, almost. 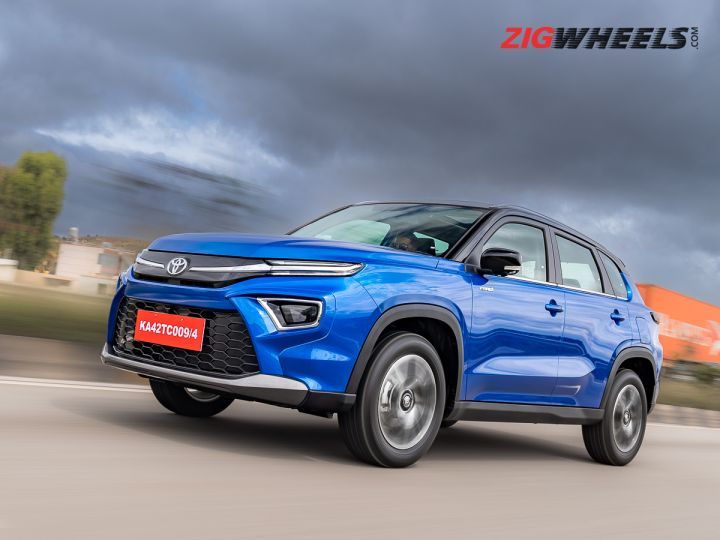 A quick look at the Urban Cruiser Hyryder’s brochure, and you’d want to believe Toyota is ready for war. But there’s a twist. With Toyota’s strong-hybrid tech headlining the Hyryder’s act, it wants to appeal to your sensibilities, logic and rationality. It’s not trying to rewrite the rules of the game, it’s just gaining incremental advantages wherever it can. The Urban Cruiser Hyryder then is as Toyota as it gets.

There’s a good reason behind the Urban Cruiser tag on the Hyryder. Much like the jungle-traversing, dune-bashing, water-crossing Land Cruisers, Toyota wants to build a brand out of the ‘Urban Cruiser’. That’s marketing talk for soft-roaders and city-slicking SUVs.

Look past the name, and you’d see a rather sharp looking SUV. Something that grabs eyeballs by virtue of its size. It’s the longest in its class, and squares up well against the Cretas and Seltoses of the world. It’s very obviously Toyota in the way the grille extends into the twin daytime running lamps. The carbon fibre-esque finish on the grille is a sweet touch. Tasteful dabs of chrome wrap around the LED projector headlamps and underline the glasshouse too.

You can choose from seven monotone and four dual-tone colour options. I’d pick the dual tone: the ‘floating roof’ effect really seems to make the side profile pop. As do the snazzy 17-inch wheels that are shod with 215/60-section tyres. C-shaped motifs for the position lamps and those unique vertical tail lamps on the bumper round things off nicely.

We wish Toyota did a little more to distinguish the Hybrid version from the run-of-the-mill Hyryder. More so since the strong-hybrid tech is its party piece. A couple of ‘Hybrid’ badges are all you get. A blue halo for the logo and different wheels, maybe?

Toyota has chosen to make the Hybrid feel a little more special to the owner by way of a unique chocolate brown-black color theme. There are a few features unique to the Hyryder Hybrid too, including the digital driver’s display, wireless charging, front seat ventilation, tyre pressure monitoring system and a ‘premium sound system’. Other notable highlights include a panoramic sunroof, 360-degree camera, cruise control and climate control.

Infotainment duties are handled by a snappy 9-inch touchscreen. Quick, responsive, easy-to-use — the screen is a breeze to operate. There’s wireless Android Auto and Apple CarPlay too.

What’s missing? Not much really. The Hyundai-Kia duo has a little extra like a powered driver’s seat and an air purifier, but you’re unlikely to miss them in the Toyota.

While the features list is par for the course, it’s the interior quality that cements a solid first impression. The simple dashboard design sets the ball rolling, and the good quality plastic and soft-touch leatherette on the dashboard and door pads elevate the experience. The front seats are wide and accommodating, and in my opinion—just the right amount of firm. This means even the horizontally challenged among us will feel comfortable here.

Small snag in the co-driver’s seat: the protruding dash is likely to graze against the occupant’s right knee. This forces you to sit a little further behind. Thankfully though, there’s enough room in the rear seats for a six-footer to be comfortable. Enough width for three average-sized adults too. Across rows, headroom is in short supply. Anyone over six feet will have their hair grazing against the headliner. We expect lower trims (that don’t have a panoramic sunroof) to be better in this regard.

The Hybrid variant also asks you to compromise on boot space, because of the battery in the boot. It’s stingy with height, which means you have to place even small overnighter trolleys horizontally. Bigger luggage will require you to remove the parcel tray. There’s a little more space for you to store small items like footwear or maybe an umbrella.

Trivia: The (full-size) spare wheel for the Hyryder Hybrid is placed on the underside with a release from the inside, like the Innova. Mild-hybrid version gets it in the usual spot under the boot floor.

Petrol plus electric motor = yum? Not in this case. This system is aimed at being sensible and frugal, not silly and fun. It starts up in pure EV mode and lets you calmly putter around in absolute silence. Toyota says the Hyryder can reach speeds of up to 40kmph on battery power alone, provided there’s enough juice, of course. Low speed city crawls are dealt with ease, and acceleration is instant.

Ask for more from the drivetrain, and the 1.5-litre, three-cylinder engine wakes up in a jiffy, shouldering some load. It’s expectedly thrummy and vibey, but not intrusive in any manner. As speed picks up, the petrol engine drives the wheels while also sending some power back to the battery when possible.

The Hyryder Hybrid is at absolute ease maintaining triple digit speeds on the highway. But its laidback nature means you will have to plan your overtakes. Do not expect it to rocket past traffic when you put your foot down at 80-100kmph. The turbo-petrol SUVs in this segment do a far better job. Acceleration from a standstill is leisurely, at around 13 seconds.

What the Hyryder takes away in terms of fun, it returns to your wallet—quite generously at that. Despite hard in-gear acceleration runs and 0-100 testing, we saw 16kmpl on the MID. Driving in a relaxed manner saw this number climb up to as high as 23kmpl! Inside the city, we expect the Hyryder to be even better, considering it’ll run on electric ponies for most of the time. Toyota’s claim of 27.97kmpl might seem far-fetched at first, but you could get very close to that in the real world without trying too hard.

There’s some confidence in the way the Hyryder tackles highways and broken roads too. At low speeds, there’s an underlying firmness that can be felt. Over really broken surfaces, the Hyryder exhibits some side-to-side rocking. However, it never gets uncomfortable inside the cabin. The firm suspension has an upside on the highways, where the Hyryder feels composed and stable at 100-120kmph. Expansion joints and level changes don’t hassle it either. We couldn’t really push the Hyryder through corners much, but we did appreciate the predictable steering. Steering weight could’ve been dialed down a wee bit, considering this SUV will spend most of its time inside the city.

If you want an SUV that knocks your socks off with its performance, you’re better off with one that has a turbo-petrol engine. The Hyryder is all about being grown up and sensible. Save for the compromise in the boot space, there’s not much amiss with the Hyryder Hybrid. It does what it’s expected to in terms of space, comfort, build, fuel efficiency and features too.

All that’s left for Toyota to do is not get carried away when it comes to pricing. We expect the Hyryder range to start under Rs 10 lakh for the base-spec mild-hybrid version. If Toyota manages to price the top-spec Hybrid variant in the Rs 18-19 lakh range, they’ve got a best-seller on their hands.