The German major enters the hotly contested premium SUV space with the Tiguan, finally. What’s it got? 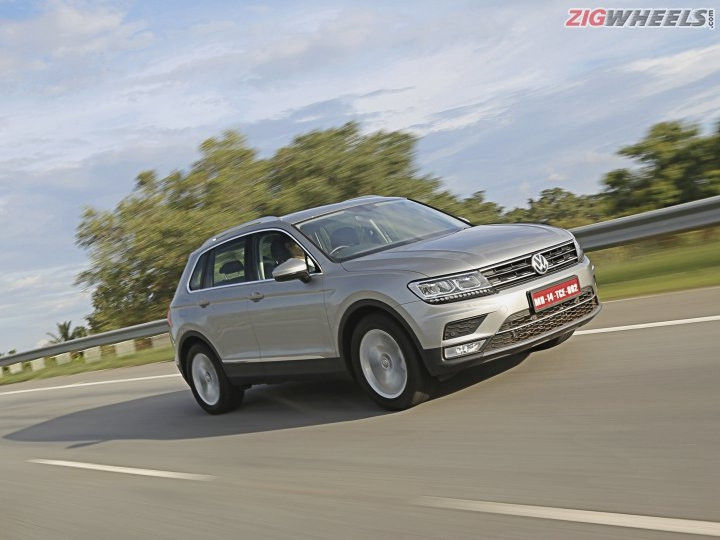 It has been three years since Volkswagen's conspicuous absence from the Indian SUV market and two years since it announced the Tiguan for India. And with the launch of the new generation Tiguan, the wait for an SUV from the German manufacturer has finally come to an end. But is the Tiguan really worth its asking price of just under Rs 30 lakh, which puts it bang in the territory of compact luxury SUVs like the BMW X1, Mercedes-Benz GLA and the Audi Q3?
Interestingly Volkswagen is clear about this German trio being the Tiguan's competition and not the similarly priced but more purposeful Endeavour and Fortuner. Of course, the Tiguan is a lot smaller than the two, just like the X1, GLA and Q3. And that's beside the fact that it comes loaded with more features and equipment than almost all SUVs at its price point. We spent the better part of a day driving it for nearly over 400km, which has helped us clear the air about the all-new Tiguan.

How does it look?
Like a Volkswagen. The Tiguan wears the family look and the front end is particularly similar to other Volkswagens. The face is more in sync with newer cars from the brand sold abroad rather the ones on our roads, which gives it a fresh appearance. A quick glance is enough to convince you it looks a lot more crossover than SUV though, and that's not just because of its rather short height of 1672mm. The design is sharp and edgy but simple, as the Tiguan doesn't look too muscular like conventional SUVs. If anything, it wears an understated look that's very European.

The sharp creases on the hood start at the ends of the grille and go all the way to the outer edges of the bonnet, which is an interesting design cue. The recesses on the sides generate a sharp crease leading all the way to the tail gate to engulf the tail lamps. All exterior lights on the Highline trim you see here are LED units, though the Comfortline misses out on LED tail lights. Headlamp design is typical of Volkswagens, while the tail light design gives the Tiguan's rear a distinct identity. Fit-finish is excellent, and in line with the more expensive German SUVs the Tiguan targets.

Is it as premium inside?
Yes. The sharp, edgy design continues and makes for an attractive looking cabin with the all-black theme. Seats are covered in Vienna leather with grey piping, and if you find the insides too dark, the Highline gets a panoramic sunroof to give the cabin a sense of airiness. Then there's the white hued ambient lighting on the door panels, along the sunroof's periphery and several other areas which glows in the dark, and you can even adjust the intensity of its LEDs. The highlight of the Tiguan's interiors though has to be the high quality materials it uses. The top half of the dashboard gets soft touch plastics, as do the door arm rests.

The dash in fact is very well put together and its quality and fit-finish speaks volumes about the solid build Volkswagen is known for. The precise click with which each switch operates is what we've seen on more expensive luxury cars, and Volkswagen has certainly ensured quality is top notch. The flat-bottomed steering wheel gets paddle shifters, and sits in front of the twin pods for the clocks which are again, a typical Volkswagen affair. There's an 8-inch touchscreen with an array of connectivity options, including Apple CarPlay and Android Auto, which have now become de rigueur. Of course, there's a whole list of features and equipment…

And that is an extensive list!
The Tiguan gets an automatic function for headlights and wipers, electric adjust for the driver's seat with memory function, height adjust for the front passenger seat (no electric adjustment though), heated front seats (they're not cooled!), a 60:40 split rear seat that can slide forwards and backwards and can be reclined, picnic trays behind the front seat backs with cup holders, three-zone air-conditioning and a powered tail gate with a courtesy function that can open the tail gate automatically. Then there's cruise control, hill hold and hill descent, park assist, front and rear parking sensors and a reverse camera with a crisp resolution and guiding lines.

The Tiguan gets a tyre pressure monitoring system too! The infotainment system integrates a pretty cool feature called Think Blue which has a scoring system to rate your driving style depending on how efficiently you are driving. There's switchable driver accounts – you can choose from three driver profiles and one guest profile that saves individual settings. Heck, you can even view recommended tyre pressures for various load conditions on the screen itself!
The Tiguan's party trick though is Volkswagen's 4MOTION on-demand four wheel drive system. Power is sent to the front wheels primarily but the system can send power to the rear wheels as well whenever required. The Tiguan also gets a mode selector switch, and road modes include Eco, Sport, Normal and Individual, with Individual allowing you to customise the steering, powertrain and air conditioning. Off-road modes include one with preset settings, a customisable off-road mode and a snow mode.

Then there's the safety features. The Tiguan gets six airbags, ABS with EBD, ESP, and an ‘Active Hood' system which raises the front of the hood by 3 inches in case the SUV detects that an impact with a pedestrian is imminent. Not surprising it scored full five stars in the EuroNCAP ratings.
What's under the hood?
For India Volkswagen has launched the Tiguan with its new generation 2.0-litre diesel engine only. The four pot motor offers 143PS of power in this guise along with 340Nm of torque that's available from as low as 1750rpm. Refinement levels are excellent to the point that even the idle clatter isn't too audible. In fact as revs build the engine manages to sound sporty in a very un-diesel like manner. Power delivery is linear with a smooth flow of torque all the way to the top of the rev range, and that makes the Tiguan quick.

The engine is mated to Volkswagen's trademark 7-speed DSG gearbox, a transmission we have come to appreciate immensely over the years for its intelligence. The gearbox is quick to swap ratios on demand via the stick or paddles, and will decide how quickly it should shift up on its own in drive or sport depending on your throttle inputs. The powertrain makes for a claimed 17.06kmpl which is again impressive.
The SUV masks its speeds well and there's hardly any sensation of speed unless you look down at the speedometer, thanks to the refinement and also the commendable cabin insulation. It is this demeanor that makes the Tiguan feel all the more like an expensive, high quality automobile. The fact that the Tiguan felt relaxed with more reserves of power available even when cruising at 150kmph was something that impressed me a lot as well, and allowed us to make rapid progress on open highways. All that said I would have liked some more character from the engine as it feels so refined and the acceleration a little too linear, like running your fingers along a smooth ribbon of silk.

How does it drive?
The Tiguan illustrates the typical traits of a well-built German SUV in this department as well. It has an uncanny ability to feel more like an executive sedan rather than SUV especially with its kind of handling. Kshitij and I took turns driving the Tiguan, and while we did like it's sangfroid when pushing speeds on the highway, it was in the hills that we enjoyed it all the more. On open roads the Tiguan remained composed even when making quick lane changes at speeds and its handling shined even more around bends.

It stayed flat through corners in a sedan-like manner, and admittedly the handling is closer to compact luxury SUVs. Smooth corners were taken with aplomb and even the bumpy ones didn't quite unsettle it. I'd credit that not only to the brilliant chassis and well-sorted suspension, but also the sticky 235/55 R18 Hankook rubber on the Highline (Comfortline gets smaller 215/65 R17 tyres). The tyres add a lot of confidence in conjunction with the fact that there isn't much body roll. The Highline's wider tyres are also self-sealing – a gel inside ensures smaller punctures are taken care of without a bother.
The steering while precise enough to feel confident irrespective of speeds, could have offered some more feedback, as it can feel slightly vague. The suspension is set up somewhere between firm and stiff and causes thuds when going fast over potholes or speed breakers though that's a tradeoff not many would mind considering the confident handling. The thuds aside, the Tiguan really has no trouble soaking undulations. The suspension ensures occupants aren't unsettled, and in fact you are better off going fast over broken roads and letting the suspension do its thing, rather than slowing down. Brakes offer good bite but aren't the best in terms of feel, and a better feel would certainly help in improving judgments when you need to slow down quickly.

Final words
The Tiguan's packaging is as good as it gets for a premium SUV. In fact with its kind dynamics, solid build and thoughtfully compiled features and equipment list the Tiguan is indeed a lot closer to the more upmarket, compact luxury SUVs. The pricing is certainly premium too – the lower specced Comfortline retails at Rs 27.98 lakh ex-showroom New Delhi, while the fully-loaded Highline retails at Rs 31.38 lakh. Even then, Tiguan undercuts the X1, Q3 and GLA in terms of pricing while offering better kit, which means the Tiguan gives you more bang for the buck while feeling as premium. We are yet to try off-roading in it, and while understandably it isn't meant for the hardcore stuff, we feel that is yet another area the Tiguan will better its aforementioned fellow Germans. The only thing it lacks then is the snob value of a badge. But with its driving experience, equipment list, technology, safety features (and of course the lower maintenance costs!) the Tiguan certainly marks Volkswagen's arrival in the premium SUV arena.