After sunset, the city of Mumbai seems to go back in time. We play the time traveller with the Renault Lodgy Stepway 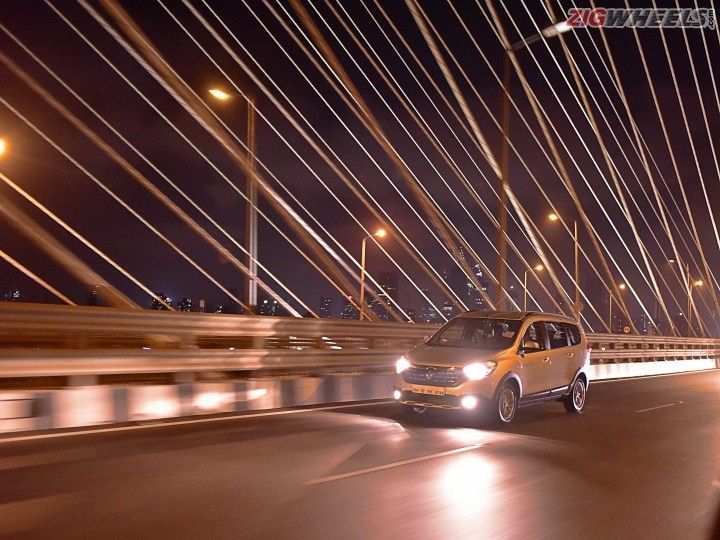 I wasn’t too keen on the drive when Renault India informed us that the Lodgy Stepway media drive has been organised in Mumbai. Being a Pune-ite I cannot deny my dislike for the “city that never sleeps”. The feeling has something to do with my dislike for crowded spaces. That said, it was a relief to know that we would be driving the Lodgy at night, well post sunset when the city wakes up in its own nocturnal ways. I thus found myself standing at the magnificent Gateway of India, one of the country’s most iconic structures and a distinct identity of Mumbai. This, to everyone who doesn’t know Mumbai, is in what locals call SoBo or “South Bombay”, one of the oldest and most expensive areas in the city.

It isn’t that I haven’t seen the Lodgy before, but reacquainting myself with the people mover was something I was looking forward to, especially with its kind of space. The rather unconventional design hasn’t quite cut it with the masses, but the Stepway edition does look pretty appealing. Renault has done a fine job of transforming the Lodgy from a mundane people's mover to something you would love to own as a family vehicle. Needless to say, the Stepway is the premium edition of the Lodgy, which Renault hopes will attract buyers looking for a spacious utility vehicle for personal use rather than fleet owners.

Changes are thus cosmetic, but extensive. The Stepway gets a body cladding all around that has been integrated well with the MUV’s design, and the wheel arches in fact make it look less-van and more-SUV. Faux skid plates on front and rear bumpers, large fog lamps and dollops of chrome on the front grille and bumper attest to that. 16-inch alloys finished in grey and roof rails also contribute to the Stepway’s added design flair.

The premium feel continues inside thanks to the use of leatherette seats. You can also opt for captain seats for the middle row with individual armrests and a foldable tray on front seat backs. The dashboard reminded me of the Duster’s but feels more premium with its shiny black centre console and chrome trim. It houses the Duster's 7-inch touchscreen infotainment system and comes with inbuilt navigation. Settling into the plush seats the cool ambience felt good, a welcome change from the humidity outside. AC ducts integrated into the roof do a good job of cooling the second and third-row, though floor-mounted vents would be welcome for the second row too. Prior to our drive we were treated to a yacht ride, to help us to draw parallels with the roominess and ride of the yacht with the Lodgy Stepway. Now a roomy cabin does not necessarily translate to space and that's the case with the Stepway. In a bid to maximise legroom for third row occupants, the middle-row seats miss out on substantial leg room, a fact vocally announced by my co-passengers on multiple occasions. The fact that the captain seats do not slide back and forth is an opportunity missed.

For the drive, we headed south, where the Victorian charm of Mumbai lies. This is where the bustling metro is quick to transform into a quaint city lost-in-time. The area has a peculiar charm thanks to the tree-lined narrow lanes with Victorian-era architecture and lamp posts that lent the moon-lit night a warm glow. Next stop was the famous Marine Drive, but only after sampling the famous sandwich ice-cream at K Rustom at Nariman point. Home-made with unique flavours, this is a must-do when in Mumbai.

Marine Drive is a long and wide road that runs along the Mumbai coastline. Everyone seems to be in a hurry here and speeds are quite high during the night as traffic is sparse. It is a good thing that the Stepway gets the option of the more powerful 110PS version of Renault’s 1.5-litre diesel engine, though lower variants are on offer in the 85PS trim. The engine has the typical diesel rattle at idle, though it is fairly quiet on the move. Grunt is good enough to get up to speeds quickly, while the six-speed transmission’s well-spaced ratios ensure the motor isn't strained on most occasions. Also, the sixth cog is a vital element to boosting fuel efficiency on long drives. In fact, the 80-odd kilometres we covered over the course of the drive, barely had the tank range drop.

Late evenings mean Marine Drive has a line of cars parked along the road and finding a place to park is a chore. The Stepway’s reverse camera and light steering were sure helpful in squeezing the 4.5 metre long MUV between two cars though. The clutch has a light feel for a diesel as well, which coupled with the lightness of the steering made driving the Lodgy easy to move around town. What’s more, the ride quality is excellent, in keeping with the demands of the segment, and I see no reason for the Lodgy to unsettle my family if I were to buy one. Most bumps and speed breakers were soaked in well, and the ride quality should be good even at highway speeds.

When in Mumbai, Marine drive is certainly a good place to unwind. Take a walk along the wide promenade or just sit on a bench and soak in the cool sea breeze. Or if in the mood to drive, the Bandra-Worli sea link is a good option. Our drive was pretty short though, and I wouldn’t have minded doodling around the city for some more time. With the drive done and the Lodgy returned, it was time to head to one of the city's numerous watering holes to relax. Over some chilled beers, the conversation veers to the Lodgy’s pricing. The Stepway edition retails between Rs 9.72 lakh ex-showroom Delhi for the base variant and Rs 11.55 lakh for the top-end variant with all the bells and whistles and a seven-seat configuration.

At its price, the Lodgy Stepway has a lot going for it, like a good design, safety features like ABS and EBD, powerful and frugal engine options, flexible seating and a host of features. It does miss out on middle-row seat space but other than that there is very little to nitpick. I think Mumbai develops a charm post sunset that is unique to it, and the city seems to be growing on me as long as I venture there after dark. As for transportation to Mumbai for me and my posse, the Lodgy Stepway will do.