The new 2016 Audi Q7 not only has to take on the likes of Mercedes-Benz GL-Class, BMW X5 and Range Rover Sport but also has to outdo the hugely popular current generation Q7. We drive the second-generation 2016 Audi Q7 on the hilly roads of Sion, Switzerland and return impressed and surprised for most parts. 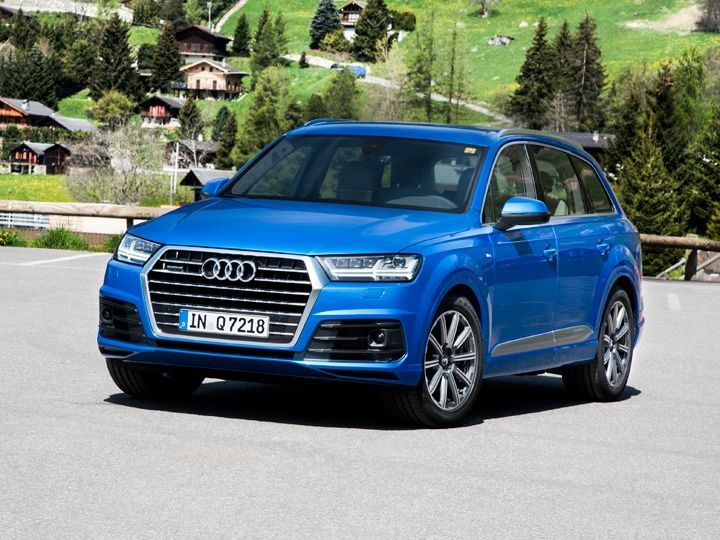 The first generation Audi Q7 is still showing no signs of slowing down on the sales chart — having sold over 5 lakh units worldwide — which is partly why Audi was in no hurry to bring in the all-new model. Launched internationally exactly a decade ago, the luxury SUV has been receiving minor cosmetic changes over the years, but this is the first proper makeover.

The engineers at Audi AG had enough time to get everything perfect on the 2016 Audi Q7. And clearly it’s not a half hearted effort. One of the biggest changes is switching from the previous off-road inclined underpinnings to a more road-focused MLB platform, which one will see in a host of new Audi sedans, in future.

So the new Q7 has shed off plenty of flab and bulk, both in terms of design and body parts and weighs 325kg less than the older model. Just the axels are 67kg lighter; doors lose 24kg; while the exhaust system weighs 19kg less now. Now being sleeker, a few inches smaller and much lighter than the first-gen Q7, the 2016 Audi Q7 doesn’t appear as imposing as before – which has been one of its strongest aspect till now.

In terms of design, the 2016 Audi Q7 is still distinctly an Audi. The prominent Bavarian-beard like chrome grille continues to dominate the face of the Q7; while a pair of sleeker LED headlight and less contoured bonnet make it more streamlined. The bumper, shoulder and roof have sharper lines now. Obviously, the new model is also more aerodynamic with its new found athletic stance and new underbody. It’s an aggressive design, but yet not as towering a figure as earlier.

Once on the driver’s seat things are far more impressive. Sophisticated, practical, and extremely aesthetical - the cabin, as before, will set a new benchmark in the luxury SUV segment. The different materials on the dashboard beautifully overlap each other and come with a retractable 8.3-inch infotainment display, creating a stunning layout. The minimalistic centre console comes with a stout gear lever, new MMI multimedia controls and an optional touch-pad.

The user interface is intuitive and fairly easy to use, but we just adore the design and feel of the optional 12.3-inch TFT instrument cluster, carried over from the new Audi TT. The only issue is that there’s just one too many information flashing on the screen for the driver, which can get distractive. The standard car internationally comes with a great Bose music system, but there’s an option to better it with a terrific, and far more expensive, Bang & Olufsen 3D sound system.

Despite shrinking in overall size, the 2016 Audi Q7 has more than adequate room in the cabin. All the three rows of seats are pretty comfortable, with the front and second row being the most spacious. With all seats in position, it offers 295-litres of storage space, and with the second and third rows folded one can carve out up to 1955-litres for your luggage.

There’s a massive list of equipment which the 2016 Audi Q7 boasts of – which include: Collision Avoidance Assist, Cross Traffic Assist and Trailer Assist. Then the adaptive cruise control comes with Traffic Jam assistance which can drive the Q7 for you up to 60kmph. The latest version of features such as Lane Departure warning and assist, Blind Spot monitoring and Auto Braking, are some of the others. But due to our strict norms on civilian use of radar, most of these won’t make it to India.

Engine options include a petrol 3.0-litre TFSI that churns out 333PS of power and 440Nm of torque; and, the more important for India, the 3.0 TDI diesel powerplant offered in two states of tunes – a reasonably powered 218PS and 500Nm standard version and the might 272PS and 600Nm tarmac scorcher. All motors come mated to a ZF sourced 8-speed tiptronic transmission which has been tuned for better low-end power.

This makes the 2016 Audi Q7 a lot easier to drive within city traffic and at the same time help squeeze out the best possible fuel efficiency. The transmission is quick to help the diesel Q7 overcome the initial lag quickly and feeds the massive torque in to sprint past 150kmph in no time.

But it’s the refinement of the 2016 Audi Q7 3.0 TDI which is unparallel to any other diesel powered SUV in its segment. The motor is hardly audible in the cabin, and also the more aerodynamic exterior design ensure that the wind noise is much lower than the outgoing model. With a faint growl the 3.0-litre TDI plunges from 0-100kmph in just over 6 seconds, and goes on to its limited top speed of over 230kmph.

And the biggest surprise is that an SUV of this size and proportion is so agile and sporty to manoeuvre. The 2016 Audi Q7 comes equipped with adaptive suspension, which doesn’t just make the ride quality plush while driving at lower speeds, but also give the luxury SUV impressive driving dynamics.

When in Efficiency, Comfort or Auto mode, the new Q7 remains soft and plaint, brushing away road undulations with focus clearly on passenger comfort. Tap the driving mode to Dynamic and the air suspension becomes tauter, controlling the body roll to a great extent and offering better control through a corner. Being 50mm lower than the older model and use of new-age lightweight platform with lower unsprung mass, helps this cause further.

Our test car also came with the optional four-wheel-steering system which turns the rear wheel in the opposite direction to reduce the overall turning radius and even enhances high-speed stability. To top that, the new Q7 can also do a fair bit of off-roading as the quattro permanent all-wheel drive not just helps while carving corners, but also can tow one out of tricky road conditions. Moreover, the 2015 Audi Q7 can be raised up to 9.7-inches if the road conditions are not that favourable.

Audi took a long time preparing the 2016 Audi Q7 and it has improved in every aspect. It is lighter, has better features; is comfortable and sporty. The motor is refined like no other diesel mill in the segment and is efficient too. Expect it to reach showrooms in India by November 2015 with a price tag of around Rs 75 lakh.