The most hardcore version of the 3-door Mini Cooper has landed on our shores. We get behind the wheel to see if it gives you all the thrills and chills it promises 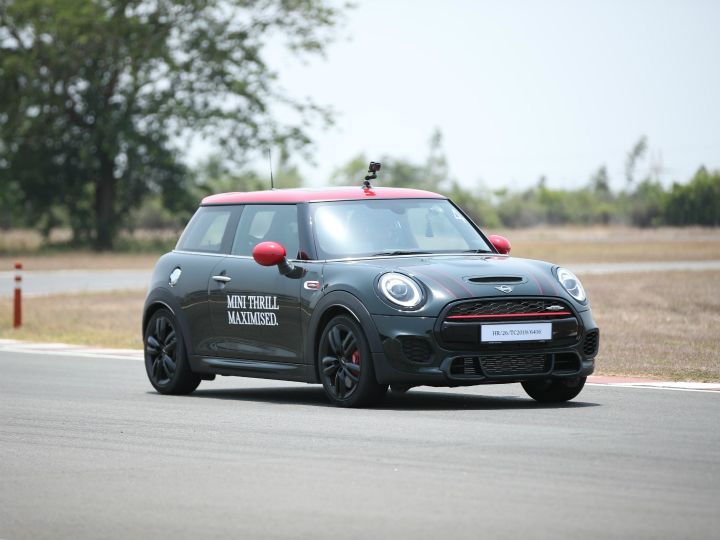 The Mini Cooper has been among the quirkiest little cars available in India. With its fun to drive dynamics, great handling and sports car rivalling performance it is already a pretty capable machine. With the all new John Cooper Works, Mini promises an even better package with lots of bells and whistles as standard. You would seem to think, what is so special about the JCW? For the uninitiated, JCW is to Mini what AMG is to Mercedes. The legendary tuning house is named after John Cooper, the British racing legend who designed the first ever F1 car with a rear engine - the Cooper T43 - setting the template for the racing machines of today as well. From those days when racing gods like Bruce McLaren, Stirling Moss and even Enzo Ferrari drove a Cooper to now, the all new Mini JCW, a lot has changed. But does the new JCW really have that extra oomph over the standard Cooper S?

With lots of expectations and even more excitement, we headed to the Madras Motor Race Track to find out just that. For those who don't know, the MMRT is a true driver’s track, developed by drivers. It has lots of sharp turns, arching parabolas and short straights to keep you constantly occupied behind the wheel in order to nail that perfect racing line.

The first thing you notice when you are behind the wheel of the JCW is the famed ‘go-kart-like’ handling that Mini Coopers are known for. Well, the JCW takes it up another notch and is a great point and shoot device that feels right at home on the track. Thanks to the reworked suspension with uprated springs and dampers and new anti-roll bars, the JCW is a better handler than the regular Cooper S. Chuck it into sharp turns and you see the stiffer suspension setup and the sharp bite from those Brembos spring into action.

They give you enough confidence to go in a little extra hard in those corners. And if you are going flat out, the JCW has another nifty trick up its sleeve to ensure that you do not end up shooting over. The mad hatters at Mini have plonked in a more intuitive stability control setting called DTC (Dynamic Traction Control) for that extra slip while driving hard.

If the JCW’s precise handling wasn’t enough to impress, its punchy engine certainly was. At the heart of the new JCW is an uprated 2.0-litre, four-cylinder petrol motor which makes a solid 231PS of power with 320Nm of torque. Introduced in India with just the 8-speed automatic step-tronic transmission, there is no option of a stick shifter. Yes, the Mini JCW makes a whole lot more than the regular Cooper S (192PS and 280Nm) and thanks to all the other JCW gadgetry on board, it puts the extra horses to good use as well.

Gearshifts with the new ZF automatic feel precise and it always keeps you in the meat of the powerband. There is no hesitation when you floor the accelerator pedal, upshifts are lightning quick and you gain speed much faster than you anticipate.

While the regular Cooper S also has great handling dynamics, where the JCW really shines is the way it pulls out of a corner. And as you are trying to find the right balance between entering slow and exiting fast, the extra 40Nm of torque does come in really handy. And while you do so, that sweet JCW-tuned exhaust note lets out an extra pop and crackle to let you know it’s up to the task.

With its uprated engine and sharp handling, the JCW made clocking quick laps on the MMRT a breeze. But getting to know the true capabilities of the JCW’s motor on this track was a bit tricky and we wish it had longer straights to let that 2.0-litre turbocharged engine sing.

Is it drool worthy though?

Well, first things first, this version of the Mini is not just a sticker job on the Cooper S. You might recognise the design from earlier and that’s because Mini gave us the brilliant JCW Pro Edition in 2017, but it was essentially a Cooper S with JCW enhancements and was extremely limited to just 20 units in India. This, however, is a proper John Cooper Works and packs a lot more.

It gets sporty red accents all around to distinguish it from the Cooper S it’s based on. The roof is also coloured in red and there is the legendary John Cooper Works badge on the grille instead of the regular Cooper S. With the JCW body kit comes the sportier bumpers and skirtings, which give the car a more menacing look. Apart from these is the inclusion of extra air dams in the front bumper in place of fog lamps to enhance air flow. It also gets new full LED DRLs, and the iconic Union Jack signature in the LED tail lamps at the rear is also a neat addition.

Step inside, and there is the familiar fighter plane-styled dashboard in the Mini JCW, which is more or less unchanged from the regular Cooper S. The toggle switches not only look cool and quirky but also add that character to the interiors. You can also spot the sportier red accents on the dashboard, reminding you that this is a JCW and not the regular Cooper S. Apart from these there are no major revisions to the cockpit, and like the regular Cooper S you do get paddle shifters here.

The biggest additions inside, though, are the race-inspired JCW bucket seats. Despite the fact that they are manually adjustable, it wasn't too much of a hassle finding the right driving position.

And there is a sunroof as well! You do get the rear seat too, and just like the Cooper S, it is best suited for children.

Should you get one?

The Mini JCW costs roughly Rs 9 lakh more than the regular Cooper S, and it is quite a premium. However, for the extra money in the JCW you get more power, sharper looks and even better handling than the Cooper S. It is a hot hatch unlike any other in India, and while we did have a ball driving it on the track, a thorough verdict has to be reserved until we get to drive it on the roads.

Still, from our brief time with the new JCW, what we can tell you is that if you are looking for great handling, bucket loads of fun and the bragging rights of owning the most hardcore Mini yet, the JCW is unlikely to disappoint.