The XL6 takes Maruti Suzuki’s city-friendly MPV, the Ertiga, adds rugged appeal and a sense of luxury to create a more welcoming 6-seater for the Indian family. How far does it stretch the formula? 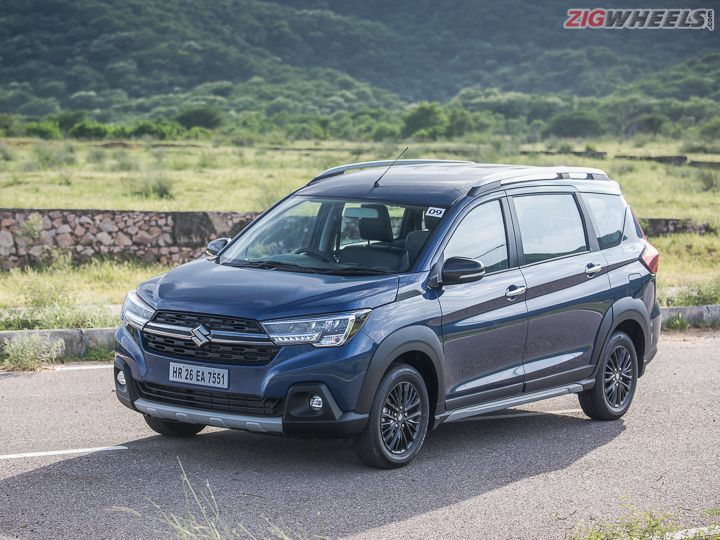 Captain’s seats instead of a bench and six seats instead of seven. You could say that’s all the difference there is between the Maruti Suzuki’s new MPV, the XL6, and the Ertiga, on which it is based. The Ertiga makes for a sensible family MPV that could also be the only car in the household. But, to fit into the upmarket Nexa lineup the Ertiga was given a thorough revamp to transform it into the XL6. Is the indulgent seating configuration, the longer feature list and the all-new look make enough to help the XL6 shoot for the heart of the MPV buyer?

Enough, and then some more.

The XL6 makes a great first impression. It looks different enough from the Ertiga such that most people may not make the connection at first glance. There’s a strong SUV-like look thanks to a flatter and higher hood, and a nose that looks more blunt too. This makes the face of the XL6 look bigger and stronger. And, it is longer, by 50mm. The chunky bars on the grille, the faux bash plates in silver and matte black cladding on the bumpers suggest that the XL6 adds a dash of ruggedness too. The sharply cut headlamps are completely packed with LEDs, as are the fog lamps. This adds a modern look to the butch new face.

The connection to the Ertiga becomes apparent when you view it from the side, as the sheet metal here is identical. However, the body cladding, the roof rails and the black ORVMs build on the tough theme. These changes have added 40 mm to the width and 10mm to the height of the XL6. But, the crucial count for the rugged quotient is groud clearance, which remains identical to the Ertiga’s 185mm. The 15” alloy wheel design is shared with the Ertiga too, but these come finished in black on the XL6. We do wish Maruti had offered a larger wheel size to give the XL6 a stronger stance. The commonality to the Ertiga is obvious from the rear as the tilgate and tail lamp design is carried over. The tail lamp internals are redesigned for a bit more premiumness by way of LED light guides and the new bumper with skid plates to rounds off the rugged theme.

The main highlight in the XL6 is the second row. The captain’s seats are the genesis of the vehicle and its name. The seats are identical to the ones in the front, except for the addition of armrests. The seats are nice and supportive, and with the seat pushed all the way back, there’s enough legroom for six-footers to be comfortable here. The large windows give you a great view out of the cabin which will make long journeys very enjoyable. Accommodating adults in all three rows is also possible as the middle row can slide to liberate room for the occupants in the third row. This is also helped by the foot room available to occupants of the middle seats. The lithium-ion battery for the mild-hybrid system is placed under the front passenger seat, but thankfully it doesn’t eat into the footroom.

To get to the third row, you could walk down the aisle or tilt and slide the middle row seats and enter via the large doors, either is equally convenient. Adults could spend time here for more than just short stints without aches and pains. The seats arent set too low so there is better than expected support for thighs and you don’t sit very knees up. Recline adjustment, adjustable headrests, and proper three point seatbelts will put you at ease further. There is one caveat, pick occupants under the 5’10” mark.

In terms of ambience, we seem to have come full circle as the XL6 has opted for an all-black theme for the cabin to distinguish itself from its more “regular” sibling’s beige cabin. Thankfully, the darker cabin doesn’t eat into the sense of space. The top end Alpha variant offers leather wrapped seats and steering wheel. The Zeta variant will make do with fabric upholstery. In terms of quality of materials, the XL6 sticks to the hard plastics seen in the Ertiga. Even the dashboard design is the same as the Ertiga but a stone like garnish on the dash differentiates it further.

Compared to the Ertiga, the XL6 is offering a few extras to up the premium quotient. On the outside it is offering full-LED headlamps, and LED fog lamps. Even the tail lamps pack LED light guides to make it look more premium. In terms of convenience there are auto-folding mirrors and auto headlamps. the leather wrapped steering and seats on the Alpha variant add a premium touch to the cabin. Suzuki’s new generation infotainment system SmartPlay Studio is also packaged in here. It offers some useful connected car features like remote vehicle tracking, vehicle status, alerts and geofencing.

Weirdly, the XL6 misses out on some basics, like cup holders for the second row. The second and third rows could have done with USB charging points instead of the 12v sockets currently offered for the last two rows. To really shake up the competition and make the XL (eXtra Luxury) tag stick Maruti could have offered sunblinds for the second row, and a sunroof would have guaranteed admiration.

The XL6 is only available with a petrol engine. Yes, there is no diesel engine on offer. The 1.5 litre mild-hybrid equipped petrol engine is in the same state of tune as in the Ertiga and even offers the same four-speed automatic and five-speed manual gearbox options. Unsurprisingly, the XL6 was just as pleasing to drive. The petrol-electric combination ensures city commutes are hassle free as the electric motor steps in to up the pace at low and mid revs. The engine also revs freely if you are in the mood to step hard on the accelerator. The breadth of the engine’s abilities is best enjoyed with the manual gearbox. Yes, you will have to deal with the clutch, but the pedal is light and gear shifts clean.

The automatic gearbox equipped option, despite having only four-speeds, manages to feel at ease while commuting. However, the tall ratios (1st - 60kmph, 2nd - 110kph; indicated) can make it feel a bit muddled at times as it goes up and down the gears to find the right response. When driven in a hurry it forces the engine to use all the revs to really get going. The lack of paddles, or tap-to-shift of the gear lever means you can't control what the gearbox is up to. So, it is better to adapt and drive with grace.

At 19.01kpl for the manual and 17.99kpl for the auto, Maruti claims that the XL6’s fuel efficiency is on par with the Ertiga.

Travelling in the XL6 is satisfying as it delivers good composure at highway speeds. At these speeds the XL6 shakes off big potholes with an ease that is surprising at first. At city speeds you might feel that odd bump, but that won’t detract from the overall comfort in the cabin. From behind the wheel you do wish there was a greater sense of connection from the steering wheel and from the brake pedal. Like with most new Maruti’s the steering is very vague and ends up demanding quite a few corrections from the driver when making directional changes at higher speeds. The mushiness of the brake pedals though can be attributed to the brake energy recuperation feature that kicks in when slowing down.

As a driver you do get a few perks, like the tell tale light on the instrument cluster that glows green , blue or white to indicate whether your driving is economical, spirited or allowing energy recuperation. The colour MID also shows you brake and accelerator usage, G-forces, and real-time torque and power delivery. This is aside from the usual trip computer information.

The XL6 is available with ABS, EBD, dual-airbags and ISOFIX mounts. The automatic versions also offer ESP and Hill-hold. However, the lack of curtain airbags is a glaring miss as the XL6 has sharpened its focus on the middle row, for which no added crash-protection has been offered.

What’s in a name?

Our biggest criticism of the the XL6 is that it could have cemented its luxury proposition more soundly. A few well-chosen of features and wow-elements would have raised the experience manyfold. This criticism stems from the XL6’s ability to convince us of its upmarket nature. It’s design and the second-row experience are steps in the right direction that justify the Rs 70 -80,000 premium over the Ertiga . However, it leaves you wanting for more. The XL6 like we have come to expect from Marutis toes a sensible and practical line. To its credit, it drives and performs with confidence too. So, for big families looking for a single car that could do it all while packing in more appeal and more comfort, the new XL6 might seem like just the thing they were waiting for.