Is Hero’s latest full-faired offering a proper spiritual successor to the original Karizma that we’ve all been waiting for? 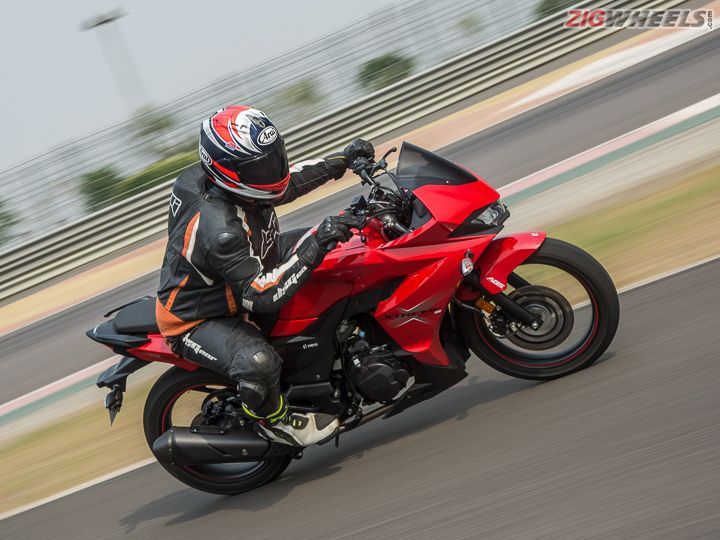 There’s no doubt that the Hero (then Hero Honda) Karizma was the one that established the popularity of faired motorcycles in India. It was a brilliant bike for its time, and even today, original ones in good condition fetch a pretty penny. Since then though, with the Karizma R and the ZMR, the bike kind of lost its way. But Hero’s latest bike, the Xtreme 200S, at least looks like it might be on the right track, which was laid down by the original Karizma.

This is actually the fourth bike based around Hero’s new 200cc platform which they introduced last year with the Xtreme 200R, and followed up with the XPulse 200 and the XPulse 200T just now. In fact, the company bills the 200S as the sporty sibling of this family. So the question is - just how sporty is this new motorcycle, and does it recreate the magic of the Karizma from over 15 years ago?

The Xtreme 200S is based on the 200R, which we rode last year. But what’s different? Well, the fairing and that LED headlight aside, the 200S is nearly identical to the 200R. The 12.5-litre fuel tank and tail section are basically carried over as is and the centre panels are also the same shape, just with a different finish. That said, it does look rather good, especially from the front as it reminds you of old-school 90s superbikes. Of all the naked bikes in India which have had a fairing slapped on, this Xtreme’s design looks the best integrated - almost like Hero had the fairing design in mind when it designed the 200R.

The ergonomics between the 200S and 200R are identical as well, with a low 795mm seat height, slightly rear-set footpegs, tall handlebars and an almost upright riding stance. In fact, get in the saddle of both bikes one after the other with a blindfold on and you simply won’t be able to tell them apart. Take the blindfold off though, and one key difference becomes visible. Gone is the analogue-digital instrument, instead replaced with an all-digital one. In fact, this is the same unit from the XPulse 200 and XPulse 200T, and features Bluetooth connectivity along with turn-by-turn navigation.

Does it feel sporty?

While the two XPulses get their own separate chassis and suspension design, the Xtreme 200S pinches all the underpinnings of the 200R. Which means, not only does it get the same frame, it also gets the same 37mm telescopic forks up front and 7-step preload adjustable monoshock at the rear. That said, this fairing has added a couple of kilos to the kerb weight, taking it up to 149kg. And since this is mostly over the front, the front suspension dampers have been slightly retuned for the S.

For the most part, just like the 200R, this 200S manages to offer sporty handling. Thanks to a short(ish) wheelbase of 1337mm, it turns in quite easily. The 100/80-17 front and 130/70 R17 rear MRF tyres offered good stability through the fast corners of the Buddh International Circuit, as well. In fact, since we had ridden the exact same short loop circuit on the 200R last year, this ride had a massive sense of deja vu. The 276mm front and 220mm disc rear brakes offer decent bite, but honestly there wasn’t much of a chance to test those thoroughly on the track. Single-channel ABS is offered as standard. But would we call this chassis out and out communicative? Not really, but that’s not the sort of bike Hero was going for anyway. It’s a friendly sort of motorcycle that you could use every day which won’t leave you disappointed on a winding mountain road.

...it is a bit disappointing. All four of these new Hero bikes share the same 199.6cc single-cylinder, air-cooled engine producing 18.4PS @ 8000rpm and 17.1Nm @ 6500rpm. But there’s no fuel injection on the Xtreme 200S yet; that’s just reserved for the XPulse 200. Now don’t get us wrong, it isn’t a bad engine by any means. With the same state of tune as the 200R, it offers decent low- to mid-range performance. It’s even fairly refined and there are not too many vibes to speak of, even near the redline. But it’s not going to excite you in any way. It simply doesn’t provide enough performance to match up to the chassis’ ability. And it even feels a little strained if you try to cruise at 100kmph - something the original Karizma would do rather comfortably.

Who is it for?

The Hero Xtreme 200S is not a bad bike by any means. But with the level of performance that the engine offers, the 200S feels like it should’ve appeared on the scene about five or six years ago. Now, the game has moved far head. Clearly Hero hasn’t really targeted enthusiasts with this bike. The Xtreme 200S feels like it’s meant for someone who wants a more powerful commuter motorcycle, which looks stylish and generally rides well.

So to answer our original question - does it feel sporty? Not really. Does it feel like it’s a proper successor to the Karizma. Well, the upright, friendly ergonomics and comfortable seating does remind you of the Karizma to a fair extent. But then, the Karizma offered slightly better performance, and certainly better highway legs. And something just feels wrong when a motorcycle from 2019 falls behind, no matter by how small a margin, a bike from 2003.

But while Hero hasn’t nailed the sportiness aspect of the Xtreme 200S all the way, what they have nailed absolutely bang on is the price. At Rs 98,500 (ex-showroom, Delhi), it’s the most affordable full-faired bike in the country, even undercutting the Gixxer SF, which offers a smaller engine with lesser power and torque. And at least for that, the Xtreme 200S deserves your attention, if not your admiration.