Could this XPulse 200 derivative be your perfect mile-munching companion? 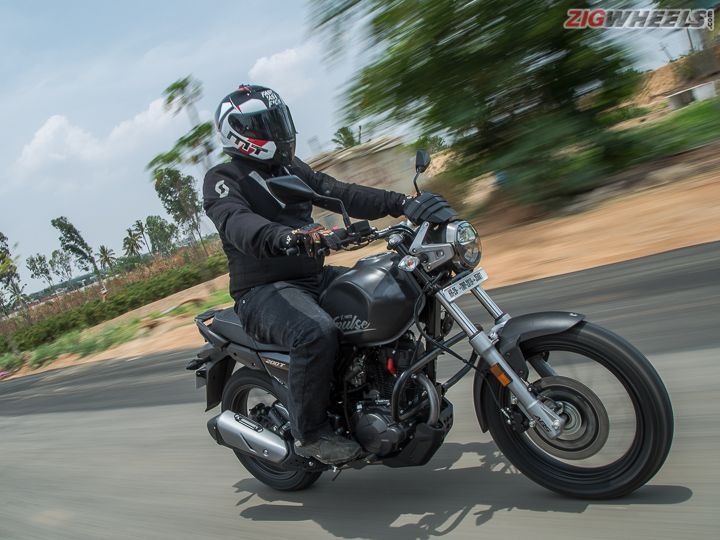 The Xtreme 200R was the first 200cc bike from Hero MotoCorp since the legendary Karizma. This though was only the first paragraph in Hero’s new chapter of exciting motorcycles. Now Hero has followed it up with three platform siblings. There’s the Impulse successor, the XPulse 200, and you can read our first ride review of the off-roader right here. Fully-faired motorcycle? The Xtreme 200S, based on the the Xtreme 200R, is just that. And finally the focus of our review here is a road-biased variant of the XPulse, the 200T. So what exactly is different on the T from the adventurous XPulse 200?

Look at its shoes!
The biggest difference is that the T ditches the spoke rims for 17-inch alloy rims, which are also found on the Xtreme bikes. The swanky alloys come shod with tubeless MRF rubber, the rear a radial. Given its touring ambitions, tubeless tyres will prove their worth out on our highways where punctures are definitely bound to take place more times than not. It obviously does inspire more control out on the tarmac than the Ceat Gripps found on the XPulse as the latter is for off-road use too.

Easy to manage
Since it runs on smaller wheels, the 200T feels a lot friendlier than the XPulse. For starters, just hopping on is easier as the seat height is 24mm lower on the T. This allows you to have better control of operations at standstill. Shorter riders need not worry about their feet reaching the ground.

But the counterpoint to that is that the ground clearance is lower by nearly 40mm. But the 178mm of clearance cleared some pretty serious bumps on our first ride! The seating position is commanding too, to give you a greater sense of control for highway miles. Although the handlebar is slightly narrower, you are still sat upright, with pegs in a neutral territory.

Plus, the 200T is a whole four kilos lighter than the XPulse 200 and this is with the main stand on. It is easier to move around the parking lot, not occupying a rather large space there as well.

Not an ADV with street rubber
No. The XPulse200 and the 200T don’t share suspension. It might look like that because of the 37mm offset forks, but the tuning is unique for this bike only. Speaking to Hero officials, we have come to know that the wheel travel is identical to the Xtreme 200R: 134mm at the front and 110mm at the rear.

Out on the highway, the 200T does not feel firm but it is not supple either. For instance, going over mild undulations such as tarmac ripples, at speeds in the region of 40-45kmph, you get a sense of the conditions beneath you but they will not hurt your back. What might give you a jolt is when you take larger road imperfections a bit more spiritedly. Here the rear monoshock could just kick back. Perhaps this issue could be resolved by altering the preload setting, or a slower rebound damping could be the cure. We will address this issue when we get the bike for a proper road test.

When riding two-up, there is a bit of sag which could lead to bottoming out when going over bumps. However, we are certain that this issue could be solved by bumping up the preload.

To complete the foundations, the XPulse 200T shares its braking components with the Xtreme 200R. You do miss out on the petal discs found on the off-roading XPulse 200. However, braking performance is not compromised. In fact, if I had to stick my neck out, the 200T has the best stopping power of the trio. The single-channel ABS does feel intrusive on a few occasions but it brings the bike to a halt soon enough. Lever feedback is still pretty vague and this is a department in which we would like things to improve.

Engine does not support touring
For a motorcycle that is pitched towards going the distance, the XPulse 200T does disappoint. When clocking 100kmph in top cog, the engine is rattling at 7500rpm, which is quite close to the 9250rpm limiter. Even 80kmph feels strained at 6000rpm, at which point you are greeted with a good amount of buzziness. This buzziness is felt greatly at the pegs, with a bit of the vibes filtering through to the tank and pegs as well.

A sombre looker
What is different here? Well, the XPulse 200 sheds its off-road persona here, getting rid of the large front fender and the small windshield. Even the aluminium bash-plate gives way for a plastic one. The dimensions thus look a lot more approachable and the seat gets a ribbed cover.

While looks are subjective, the styling on the XPulse 200T is a rather sombre affair, especially when you consider how appealing the standard XPulse is. Not to mention, both the Xtremes look quite sporty in their own right as well.

A modern bike it is not, but even though Hero claims that the styling has a bit of a retro vibe, it seems a bit of a stretch. The colours on offer are not the most flattering in our opinion and we are not totally sold on the styling either. You get the same tank, LED headlight, LED tail-light, body panels and the Bluetooth-enabled full digital console found on the XPulse.

With turn-by-turn navigation with integrated Google Maps, the navigation process is certainly better than the similar feature found on the TVS NTorq 125. There is a mobile application available both on the Google Play store as well as Apple’s app store. The pairing process is quick and does work well for the most part. You can also receive call alerts as well as a low battery indicator, which are displayed prominently. But the small niggles we encountered indicates that the app is still in the finetuning process, which should be completed by the time the bike hits dealerships later this month.

Doesn’t fit the bill
With the Xtreme 200R and the XPulse 200, we do agree with the aspirations that Hero has for these bikes. The Xtreme 200R does manage its city duties quite well, and as an off-roader the XPulse 200 can give birth to the off-road enthusiast in you. Hero has priced the 200T bike at a delicious Rs 94000, ex-showroom Delhi. Sadly, if only Hero had managed to deliver on the promise of touring as they have with the pricing, then the XPulse 200T would have been impossible to resist.