Toyota’s Captain Green, the new fourth generation Prius, is now in India. Does the hybrid-tech pioneer feel more normal now? And, can it save the planet 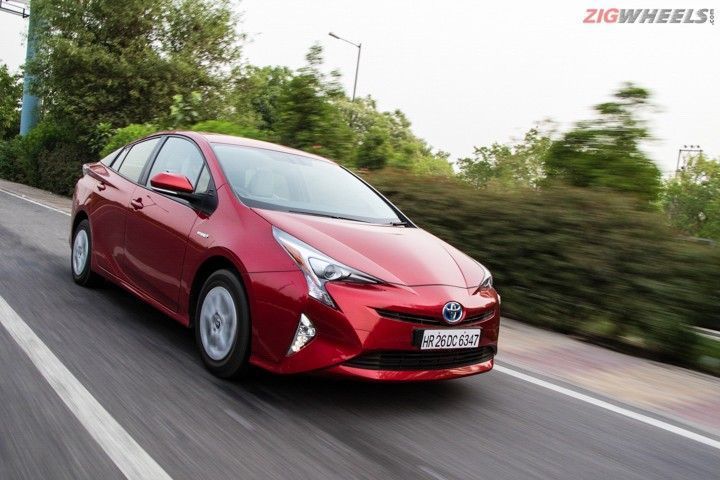 Toyota’s Prius, because of its green credentials, has been a bit of a statement. It was used to proclaim their love for our planet by  hipsters and A-list Hollywood celebrities. The third generation Prius that was first brought to India caused heads to turn too, but not quite in the same vein. Its price, quirky design and bland driving experience made sure not too many people were tempted to buy one. On the face of it the all-new fourth generation Prius is no different. Priced at Rs 38.96 lakh, it is more expensive than its bigger and more powerful sibling, the Toyota Camry Hybrid! But we had to see whether the all new Prius is now more likeable and a more ‘normal’ car for the ecologically minded car buyer.

It certainly looks sportier than before and quite far from a ‘normal’ car. The stance, though, is more aggressive and slinky. The roof sits 20mm lower and the overall length is up by 40mm. Compared to the old car the new Prius has a dash of youthfulness and athleticism about it. Progress!  Viewed from the side you can see that the basic shape remains the same, which helps the Prius get an ultra-low drag coefficient of 0.24. The wind-cheating teardrop shape, with the Kamm-back tail makes it immediately distinctive. The roofline tapers off smoothly at the boot, with the glass section on the tailgate giving it the appearance of a floating spoiler.
And effectively, the Prius looks like it hit a wormhole on its way to work in 2021. The styling is futuristic and edgy. The headlamps look like two rockets aiming for escape velocity, while the front grille and fenders are angled sharply. At the rear, the large and vertically stacked all-LED tail lamps look rather special and give the car a major chunk of its futuristic appeal. Though you would be hard-pressed to call it beautiful or even good looking, it does turn quite a few heads.

What’s changed on the inside?

Quite a lot, and yet, not that much. For starters, the futuristic theme has been carried over to the inside as well. The drive-selector lever and dashboard look like they’re straight out of a spaceship, but the seats look fairly conventional and offer good support. The all-white theme does look a bit bling but there’s plenty of black to balance out the white. But if you’ve been inside a Prius before, it will all look similar to you.

Thanks to the almost 80mm increase in length, the front feels roomier and the Prius feels like a large sedan. The rear bench is quite spacious as well, with oodles of knee-room and seating three isn’t really a problem either. The headroom, though, has been compromised for occupants measuring six feet and up due to the sloping roofline and the fact that the battery pack and fuel tank are all housed under the rear seat. But the good news is that now there is ample space in the boot for two large suitcases even with a full-size spare wheel.

What does it get?

For starters, compared to the old car, you now get a 7.0-inch touchscreen infotainment system that also doubles up as the energy monitor. The screen can be used to configure functions of most systems like lighting, locking preferences, sound, display preferences etc. The adjustments are exhaustive but the system does suffer from lag. There is a noticeable lag between the input and the execution. It is however paired to a 10-speaker JBL system which produces some great sound. You also get a dual-zone climate control which even in the sweltering Delhi heat was very effective. Another feature that made driving in Delhi a breeze was the rear reversing camera which took the stress out of reversing into tight parking spaces . And of course you get a million airbags, ABS, Traction Control and EBD as standard. A wireless charging feature has also been added but you need QI-enabled phones to make use of that tech, which in India can be as rare as rabbits in the desert.

What doesn’t it get?

Unfortunately, the list of features that it gets is balanced out by the list of features is doesn’t. The dash, though seemingly of good quality, is made of hard plastic. Rear passengers don’t get AC vents. The front seats can only be adjusted manually, which in a car that costs almost as much as a new Audi A4, is a letdown. Plus, the infotainment system doesn’t support Android Auto nor Apple CarPlay, something that is common even in cars which are almost 1/4th the price of the Prius. And finally, there are no parking sensors either.

It must balance that out with the tech then

Indeed, it does. Under the hood sits a 1.8-litre 4-cylinder Atkinson Cycle petrol unit that makes 98PS of power here, along with 142Nm of torque. Yes, even though that’s 13PS more than before, you might be tempted to raise the dreaded eyebrow. But, hold on. This being a hybrid, the electric motor in the Prius offers an additional 72PS of power, bringing up the total to 122PS and 163Nm. The power is sent to the front wheels via an ECVT transmission.
The car works on a series/parallel drivetrain layout wherein the car can be driven on pure electric, assisted power and pure petrol power as and when required. The pure electric mode is typically reserved for the city. The car also utilizes regenerative brakes that help charge the battery pack by energy produced during braking. The energy from the engine is also used to charge the battery as and when required. The car also comes with four driving modes, namely EV, ECO, Normal and Power.

All the functions mentioned above can be monitored and viewed by the all-digital instrument cluster that is housed in the centre of the dashboard. It displays more information than you might need or make sense of. Apart from the usual tripmeter, fuel levels and real time efficiency, the display in the Prius also tells you about battery levels. The power monitor displays the flow of electric current from battery to electric motor and from the regenerative brakes to the battery pack. It also displays which and how much power you are using at any given time. Then there is your fuel savings and fuel consumption record. There is a heads-up display as well though it only displays the speed. What’s more, you can access all the aforementioned functions without ever taking your hands off the steering wheel, including adjusting the climate control airflow.
The only gripe is that the Prius still uses nickel metal hydride batteries while the rest of the word has moved onto lithium-ion units.

Actually, quite a lot. The whole car including the design has been optimized for maximum efficiency. The teardrop shape gives the Prius a drag coefficient of just 0.24, which is less than that of a Nissan GT-R. The pure electric mode is a boon in the city. If you are gentle with the throttle you can silently nudge 60kmph in pure electric mode though that does drain the battery pack fairly quickly. The petrol engine barely comes on at traffic lights or bumper to bumper traffic situations. It is only engaged when the battery needs recharging. The car will extend its electric assist till wherever possible, plus the transition between pure EV, assisted and power mode is barely noticeable. As a result, the Prius returned a fuel efficiency figure of 19.5kmpl in the city during peak hour traffic. Out on the highway, the more you coast or maintain a speed, the better efficiency you’ll get as the system automatically routes the energy wherever required without wasting an ounce of it. The idea is to use the ICE as less as possible and even on a windy day it will return you 30.2kmpl on the highway.

Wow that’s quite a lot, but how does it drive?

It feels like a regular automatic car to drive sans the engine noise at low speeds. In the city, it’s easy to manage despite its size you do worry about the length initially but get used to it fairly quickly. The sporadic whirring noises from the electric motor and the futuristic looking instrument cluster in front of you are the only reminders that the Prius is in fact not a normal car. The ride is pliant despite the suspension being stiffer than before. The rear gets a new independent double wishbone setup which compared to the clunky torsion beam of the older car is a massive improvement. Plus the heavy battery pack has now been moved out of the boot which further helps the stability of the car. It isn’t Camry-comfortable and the thinner tyres do tend to crash into larger potholes, but by and large it is pretty well equipped to handle our roads. Despite initial concerns, the ground clearance proved to be adequate as well.

And to be fair and rather blunt, driving dynamics aren’t the Prius’ strong point. But it is far from being a tarmac scorcher. If you push it hard into corners, it tends to roll and the front end, thanks to its low rolling resistance tyres, constantly seem to struggle for grip. There is a fair amount of road noise in the cabin as well. The steering, though extremely light in the city and well weighed at speed, is completely devoid of feedback. The regenerative brakes can get the car from 100kmph to a dead stop in just 44.6m but are feel quite mushy at first. And it’s not that the Prius is a slouch -- it posted a 0-100kmph time of 11.49s, which is far from slow, and it can easily breach the 160kmph mark in about a kilometre. But it offers the best experience if driven gently. Keep a light foot on the throttle or engage the cruise control, be easy on the brakes and steering inputs and the Prius proves to be comfortable enough to spend an entire day behind the wheel.

The car feels comfortable on the highway and never really out of its element. The ride is pliant and it can cruise at 120kmph with ease. The only irritant is the road noise. Overtaking too is not a problem as there is plenty of power from the combined powertrain on tap. But once the battery starts to run out of juice, it affects the performance of the car. In our acceleration runs we experienced a two second drop in the run to 100kmph when the NiMH batteries of the hybrid were running low. Plus the gearbox has no manual override so you have to be extra sure before you go for the gap.

Does it make sense?

Well, that depends. Clearly, the Prius is far from being an enthusiast’s car and calling it normal could potentially make you question your sanity. It might drive like a regular car but the technology in the Prius is anything but. Plus, it still looks like it is from three years in the future, which really does stretch the definition of normal by a fair bit. But there is no taking away from the fact that even in Indian driving conditions, it is phenomenally fuel efficient.
Taking the global advancement in vehicular tech into account, at 38.9 lakh it is still a bit of a hard sell. But if want a car which is comfortable, spacious and can take you  from A to B with minimal fuel usage while helping you stand out and save the environment, then the new Prius is a cracking option.