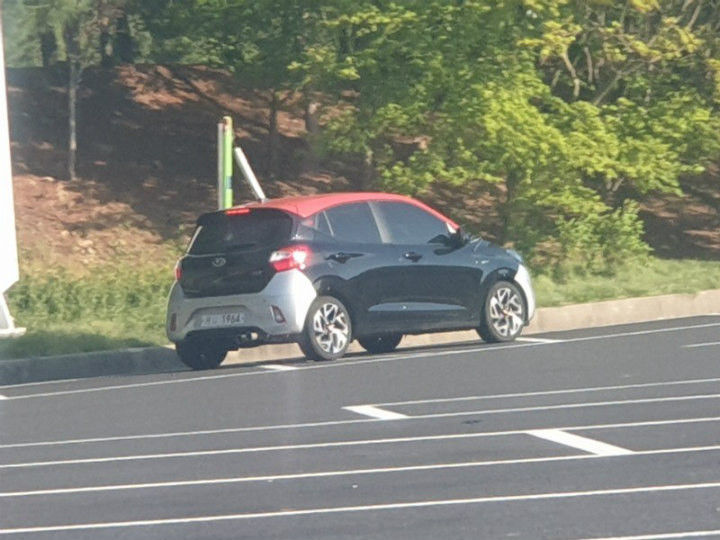 There are many hot hatchbacks that we would love to have in India but they are unlikely to ever make it here since there’s little mass demand for them. The Hyundai i10 N Line is one of them. This hot hatch made its debut at the 2019 Frankfurt Motor Show and has now finally been spotted on the road undisguised.

The spy shots reveal the i10 N Line in a red/black/silver color combo. We already know that the i10 N Line gets exterior elements that give it a sportier look. Some of them include a revised honeycomb grille, new DRLs, aggressive bumpers, a new diffuser and new 16-inch wheels. It also gets red accents on various parts.

Inside, the i10 N Line gets cosmetic changes like an all-black dashboard, ‘N’ badging on the steering wheel and gear knob and red accents around the cabin. You also get a sportier set of metal pedals to complete the hot hatch look.

The main talking point of the i10 N Line is what’s under the hood. It is powered by two petrol engines, the first one being a 1.0-litre turbo GDI mill from the Venue developing the same 172Nm of torque, but 20PS less at 100PS. The other engine option is a 1.2-litre naturally aspirated motor producing 84PS and 118Nm. Both engines are paired with a 5-speed manual gearbox, but the 1.2-litre mill also gets a 5-speed AMT option.

While this hot hatch is unlikely to reach Indian showrooms any time soon, there is a silver lining. Hyundai recently launched the Grand i10 Nios turbo variant that offers the same BS6-compliant 1.0-litre turbo engine with identical power figures, red accents in the cabin and a new front bumper. The only bits you’re missing out are the exterior changes, ‘N’ badging around the car and sporty pedals. You could say that it is a middle ground variant from Hyundai that starts at  Rs 7.68 lakh (ex-showroom, India). The Grand i10 Nios currently competes with the Ford Figo and Maruti Suzuki Swift in India.