Is the Glanza just a rebadged Baleno or does it actually offer better value than its rivals to lure you to the Toyota showroom? 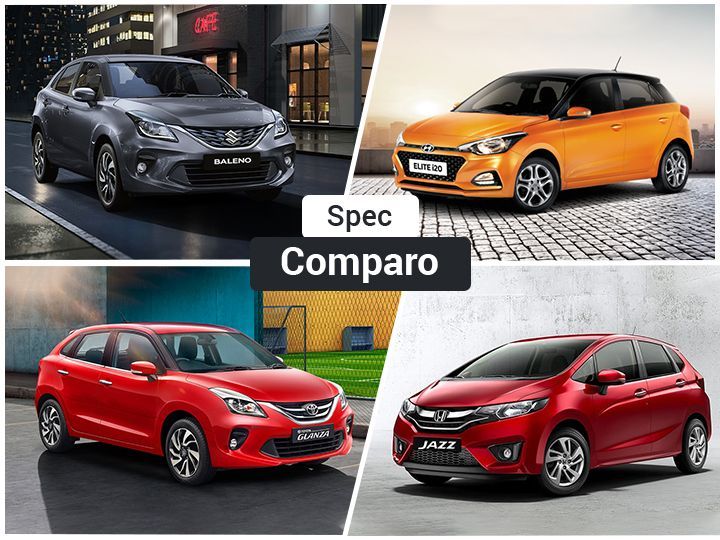 With the Glanza, Toyota has entered a segment that is dominated by the likes of the Baleno, its donor car, and the Hyundai Elite i20. Honda also has the Jazz in the segment. But does the Glanza merely offer an alternative to the Baleno or is it actually an option worth considering in the premium hatchback segment? We compare their specifications to find out.

Toyota has hit the nail on the head with the pricing of Glanza. At Rs 65,000 less than the equivalent Baleno Zeta Smart Hybrid, the Glanza makes for a tempting choice if you’re looking for a mild-hybrid hatchback. It must also be mentioned that the rest of the variants of the Glanza are priced on par with the Baleno. Click here to see how the G/Zeta variant fares against the respective trim levels on the i20 and Jazz.

The VVT variant of the Glanza and Jazz have a higher starting price because their base-spec variants aren’t as barebones as the entry-level variants of the Elite i20 or the Baleno VVT. The Smart Hybrid setup of the Baleno is also found on the variant above the base-spec Sigma variant which is priced at Rs 7.25 lakh (ex-showroom, Delhi).

Compared to the Baleno, the Glanza gets brownie points here by offering three years and 1,00,000km warranty as standard, just like the i20. But that’s not the best in class as the Jazz offers three years/unlimited km warranty. It's a similar story when you dial in the extended warranty on offer too. While the warranty on the Glanza can be extended by two years/1,20,000km, Maruti will extend it by three years/1,00,000km for the Baleno. The top honours are again taken by the Hyundai and the Honda which offer the best warranty (total) packages of eight years/ 2,40,000km and five years/ unlimited kilometres, respectively.

Note: As the Glanza and Baleno are the same, we have not added the Baleno here.

The Toyota Glanza is the longest and the widest here, whereas the Honda Jazz is the smallest and the narrowest of the lot. However, it is the tallest one of the lot. The Elite i20 plays middle ground in terms of length and width, but is the shortest of the lot. When it comes to wheelbases, all the cars are closely stacked, but the Elite i20 edges past with an additional 40mm over the Jazz.

When it comes to carrying your weekend luggage, the Jazz has the largest boot here followed by the Toyota Glanza. The Elite i20 has the smallest boot here and by a big margin at that.

The Toyota Glanza (and Maruti Suzuki Baleno) are the only cars in the segment to feature BS6-compliant engines. Offered with a 1.2-litre VVT and Dual Jet motor, the latter gets a mild-hybrid system to save more fuel. The Dual Jet motor also produces class-leading power of 90PS, same as the Honda Jazz. On the other hand, the 1.2-litre VVT motor and Hyundai’s Kappa motor produce an identical 83PS of power. The i20 is the torquiest of the lot. All cars except for the Glanza Dual Jet come with an option of a 5-speed manual or CVT gearbox. The Glanza Dual Jet is available with a 5-speed stick shifter only.

The Dual Jet motor has a class-leading claimed efficiency of 23.87kmpl. The Glanza VVT follows comes at a close second with 21.4kmpl. The Elite i20 and Honda Jazz trail behind the Toyota-Maruti twins by a huge margin.

All cars here are well equipped. Standard features include a touchscreen infotainment system with Apple CarPlay and Android Auto, navigation, automatic climate control, powered ORVMs with electric folding and keyless entry with push-button start. The Honda misses out auto-folding ORVMs on lock/unlock and gets only a tilt-adjustable steering.

When it comes to niceties, here’s a handy table about unique features on each car:

* Available in petrol CVT and diesel MT only.

Note: Since Glanza and Baleno have the same safety features on offer, we have not added the Baleno here.

While all cars get the basics covered with dual airbags, ABS with EBD and parking sensors with rear camera, the Elite i20 takes a step further by offering six airbags on the top-spec Asta (O) variant. That’s not all, the Elite i20 and Glanza get ISOFIX mounts to securely lock the child seats too.

The Maruti Suzuki Baleno till now is the king of the segment. And given Maruti’s wide reach and service network, it’s going to be tough to replace the Baleno at the top. But that might change soon as the Toyota Glanza, though similar to the Baleno, has an attractive starting price. It also gets a more attractive warranty which can’t be ignored.

We are also yet to drive the Toyota Glanza and pitch it against its rivals for a real world comparison. So stay tuned to ZigWheels for the first drive review and a real-world comparison test.