Does the new motor give the Fascino 125 a fighting edge in the 125cc scooter segment? We answer the question via a series of detailed images 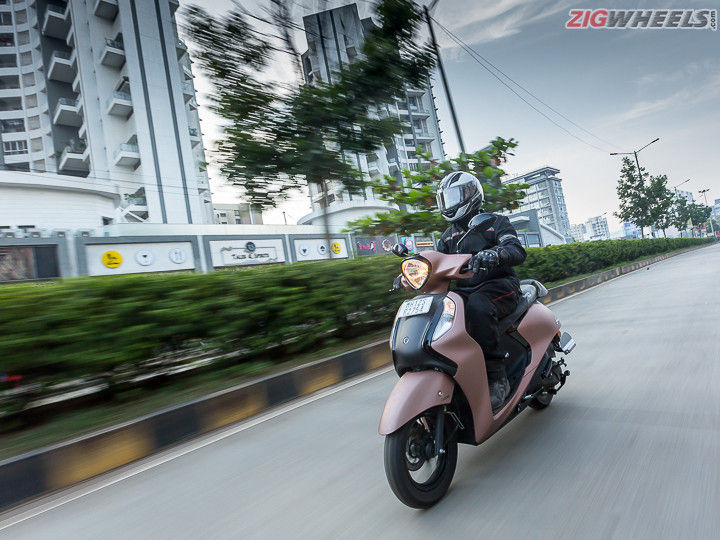 With the Fascino, Yamaha gave the masses an affordable scooter that married Vespa-like vibes with Japanese levels of refinement and reliability, making it one of the most popular 110cc scooters of India. Yamaha now seeks different pastures: the bigger and more hotly-contested 125cc segment with the new Fascino 125. Have the the upgrades made the Fascino 125 BS6 a better scooter than it was before. Here are our thoughts with the help of detailed images.

The Yamaha Fascino 125 takes the 110cc Fascino’s curvy design language a little further with a few tweaks to the bodywork.

The headlamp cowl looks a little more bulbous and the apron section looks a lot curvier. Even the side panels have extended.

Overall, the design exudes a feminine vibe, and with the wide range of colours, you can instantly turn yourself into a show-stopping fashionista.

Unfortunately, for our test unit we received what can only be described as the most subdued -- you might even call it dullest -- colour in the lineup: Sauve Copper, which is at odds with the youthful tone of the Fascino 125.

The Fascino gets a 125cc fuel-injected BS6-complaint motor that delivers 8.2PS at 6500rpm and 9.7Nm at 5000rpm While the Fascino 125 is still low on power and torque compared to its rivals it still feels quite lively.

It accelerates from standstill to 60kmph in 8.66 seconds and goes from 20 to 50kmph in 5.17 seconds. This sprightliness is primarily because of its incredibly light kerb weight of just 99kg! There’s enough grunt to get up to 70kmph quickly and the scooter doesn’t shy away from bursting past 85kmph either - post that, though, it trails off smoothly.

The addition of fuel injection aids in the combustion efficiency. This along with the linear character of the engine and the scooter’s inherent lightness make a big difference in the Fascino 125’s fuel efficiency.  In the city, the Fascino returns 65.92kmpl and 57.30kmpl in highway runs. The figures, while riding very economically, coupled with the 5.2 litre fuel tank, should ensure a range of about 300km.

The Stop & Start System also helps in ensuring better fuel efficiency. It shuts down the engine after a few seconds in traffic, and a slight twist of the throttle instantly brings the scooter back to life without any noise, thanks to the Smart Motor Generator. This is essentially a silent starter like the ACG unit found on the Honda Activa 125.

The Yamaha Fascino 125’s telescopic fork and single rear shock absorber do a stellar job in filtering out most of the bumps effortlessly. However, the pursuit of comfort results in a little bit of elasticity when it goes over very sharp bumps. Thankfully, it regains its composure rather quickly.

The light kerb weight is offset by the long wheelbase, and this also ensures a neutral steering feel at higher speeds. There are no signs of twitchiness at high speeds either. Another reason for its sorted ride quality is the larger 12-inch front wheel. At low speeds, the scooter can quickly change direction without upsetting the balance. It holds the line while negotiating a sweeping curve as well. Overall, the Fascino is fuss free when it comes to negotiating through tight urban streets.

Another area where the Yamaha scooter scores highly is in its braking. Our scooter came with the optional 190mm disc, which offered a pretty strong bite, and the system’s natural progression lets you know exactly how much force you need to apply: be it to dodge a stray dog or to come to a complete halt in traffic. Under our tests, the Fascino braked from 60-0kmph in 20.83 metres. The icing on the cake is that the brakes are quite efficient on both dry and wet roads. Calibration of the CBS too is spot on. The grip levels on the new Maxxis tyres are reassuring on both dry and wet roads. The tyres do their intended job pretty well.

The light kerb weight along with the sharp turning radius makes it very effortless to move around in tight parking spaces. While the 780mm seat height may have been up by 5mm, it is still accessible for riders who are on the shorter side.

While the floorboard is roomy, the curvy panels on the sides have resulted in the rear portion of the floorboard tapering upwards. This might make placing your feet a little awkward, especially for taller riders.

At 21 litres, the underseat storage is at par with the segment. It is large enough to easily fit a half face helmet, with additional room for small knick-knacks. There’s also a lockable utility hook on the apron to secure your grocery bags, and an optional lockable hook under the seat for an extra 200 bucks.

The Yamaha Fascino 125’s halogen headlamp is woefully underpowered. The spread is decent but the headlamp intensity leaves a lot to be desired. LEDs are the new norm and missing out on a proper LED headlamp on such a stylish scooter is a shame.

The instrument cluster also feels a little basic. Yamaha could’ve at least offered a digital inset with a clock and tripmeters. This is particularly disappointing considering the BS4 Fascino featured a small cubbyhole as standard.

While the underseat storage itself is large, there is no LED boot light even as an option. However, Yamaha offers an underseat USB charger for Rs 770. There’s also quite a bit of space between the pillion grab handle and the tail lamp, which could’ve been used for an external fuel filler. That would’ve improved the scooter’s convenience factor.

The Yamaha Fascino 125 FI is priced at Rs 68,730 for the drum variant and Rs 71,230 for the disc variant (both prices, ex-showroom Delhi). With the Fascino 125, Yamaha has almost justified the 12,000-odd rupee premium over the older scooter. The brand has offered a bunch of new, nifty features, refreshed looks, not to mention a potent engine that’s high on both refinement and fuel efficiency. And at 99kg, it is also the lightest 125cc scooter in the country. Also, it is a no-brainer which variant we would recommend here -- extra safety never goes amiss.

Sure, there are some practical features missing but they aren’t things that can’t be fixed in its next update. Moreover, at its price, the Fascino 125 currently undercuts both the Suzuki Access 125 and the Honda Activa 125, the two most popular 125cc family scooters in India.

All in all, if you’re in the market for a stylish scooter that’s easy to use, fuel-efficient and nimble, the Yamaha Fascino 125 is a worthy contender.