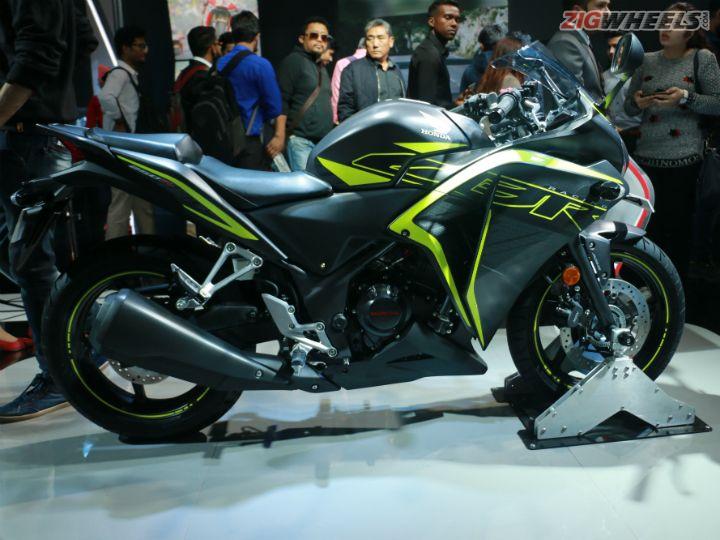 Honda's stall was buzzing at this year's Auto Expo, with 11 two-wheelers showcased, including the new Honda XBlade, updated Activa 5G and more. One of these was the updated Honda CBR250R. It was only last year that the baby CBR was discontinued from our markets for not being BSIV-compliant.

Now, it looks like Honda is gearing up for a comeback of its faired sports tourer. So what's changed in Honda's quarter-litre offering? For starters, the motorcycle now gets an LED headlamp, new colour options, new decals and a blacked-out instrument console bezel instead of the silver on the earlier version. And, of course, a BSIV-compliant engine.

In terms of design, it remains largely unchanged. The Honda VFR1200F-inspired design is carried over here with large and smooth contoured panels flowing along the length and width of the motorcycle. The front now houses a Y-shaped LED headlamp with a position lamp. The semi-digital instrument console from the older model has been carried over as well. Other design additions include two new sporty colours, including orange and green. The signature red has been maintained as well. The bike does not break new ground in design and still looks like a large, comfortable bike you can live with.

Powering the new CBR 250 is a BSIV-compliant 249.6cc, single cylinder, liquid-cooled engine which produces 26.3PS of power at 8500rpm and 22.9Nm of torque at 7000rpm, mated to a 6-speed gearbox. Underpinnings remain unchanged and it still uses a diamond frame suspended upon telescopic forks at the front and a monoshock setup at the rear. Braking duties are handled by 296mm front and 220mm rear discs, with ABS, which we hope comes as standard this time round.

Although Honda has been tight-lipped about the official launch date, we expect it to happen in the coming months. A minor price hike of Rs 3000 - 5000 is expected for the updated model. It will compete against the KTM RC390, Apache RR 310 and the Benelli 302R. Of course, we will be taking the 2018 Honda CBR250R for a spin soon enough and pitting it against some of its fiercest rivals. Until then stay tuned!