Honda had a grand pavilion at the 2018 Auto Expo, which packed quite a lot of surprises like the XBlade, Activa 5G and the CBR250R, to name a few. 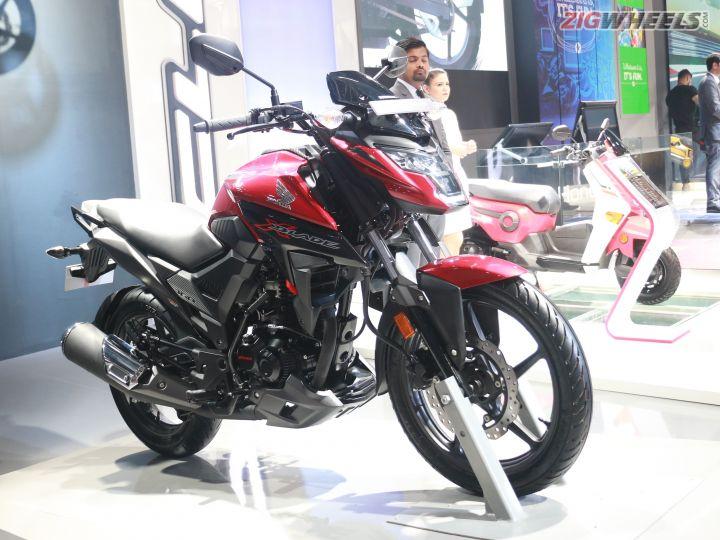 After unveiling the X-Blade, Honda then moved on to showcase the X-Blade Adventure. Over the standard bike, it gets a larger windshield, a pair of crash guards and a sturdy carrier that replaces the pillion grab rail. The Adventure also has faux carbon fibre accents on the body around the fuel cap. But there is a catch. Honda may offer the accessories as additional fitment on the standard model, but only if the response at the expo is good. The company might also sell an “Adventure” kit that turns your X-Blade into a mild adventure tourer.

As promised, Honda launched the fourth model for the 2017-18 fiscal year, the 5th generation Honda Activa. Called the Activa 5G, the new scooter gets LED headlights, a remote seat-opening button and a semi-digital instrument console. Apart from that, it remains identical to the 4G in terms of both styling and mechanicals. Prices will be out in a matter of weeks and we are expecting a premium of Rs 2,000 over the 4G.

It’s here! Honda has reintroduced the CBR250R in India. It has now undergone a BSIV update and updates like an LED headlamp and fresh graphics. Other than that, everything from the mechanics to the hardware has remained identical to the older bike. The CBR250R will now have a new rival in the market in the form of the TVS Apache RR 310. Expect the price to be close to the older model.

The Honda RC213V MotoGP race bike ridden by the 2017 champion Marc Marquez was on display at the Expo. It is powered by a 1000cc V4 motor that makes more than 241PS of power. For one season, a rider is given 7 of these powerplants, which the team has to use in 18 races. Specs aside, just standing next to the MotoGP-winning bike gives you goosebumps.

From the array of products at the Honda pavilion, the one which stood out was the PCX electric scooter. Powered by a high performance electric motor, which has been developed in-house by Honda, the PCX uses Honda's Mobile Power Pack with swappable batteries, charged separately. You can even attach two of these battery packs under the seat to get a longer range. While this is still a concept, Honda actually plans to employ this technology in its future electric products, which is pretty cool.

As a part of the 2018 update, the CB Hornet 160R now gets LED headlights and new graphics. The fully digital instrument console, the sporty fuel tank, tank extensions and the chunky exhaust muffler remain unchanged. The X-shaped LED tail lamp has also been retained from the earlier model. No change in the power figures either.

Launched last year, the CBR1000RR Fireblade costs Rs 17.61 lakhs (ex-showroom Delhi) and is brought in as a completely built unit (CBU) in India. The 2017 CBR1000RR has 191 restless horses under that gorgeous exterior, which is 11 more than the older generation. Rivaling the Fireblade is the Kawasaki Ninja ZX-10R, Yamaha R1, BMW S1000 RR, Aprilia RSV4 and the Ducati 1299 Panigale. The CBR1000RR currently costs 17.3 lakh but could get cheaper thanks to the new duty reduction on CBU bikes. Get more details about the bike here.

Also standing tall at the Honda pavilion was the 2018 Honda Goldwing. Launched at the very end of 2017, the flagship Honda for the country is priced at Rs 26.85 lakh (ex-showroom Delhi). It is available in two variants - Gold Wing and Gold Wing Tour. The Goldwing Tour commands a price of Rs 28.49 lakh and gets a trunk, heated seats, electronic rear suspension preload and traction control. Both these bikes are only available in the showcased Candy Ardent red shade.

The CBR 250 one make series bike also made an appearance at the Auto Expo. It is also a part of the ARRC racing series which travels around Asia. Apart from the obvious bodywork modifications the race bike also gets HRC's race ECU, which allows the team to use custom maps and also provides a 15 per cent power bump over the road bike. The bike also gets a host of track-spec features like a quickshifter, pit lane limiter and a shift light indicator.

While all the mechanical parts remain the same the 2018 Africa Twin showcased at the Auto Expo had a few tricks up its sleeve. The showcased model had features like ride by wire with 3 rider modes, 2.3 kg-lighter battery, stainless steel spoke wheels, brand new instrument cluster, off-road-focused footpegs and a new emergency stop signal in the rear indicators. Prices for the 2018 model will be revealed soon.