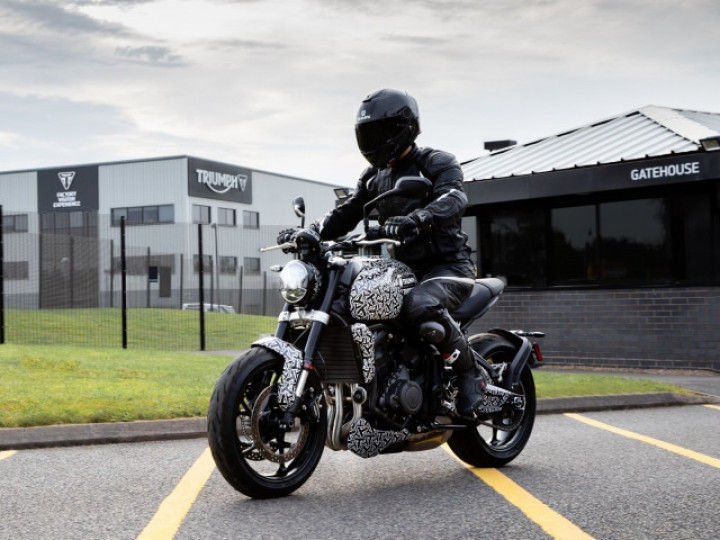 Triumph is set to unveil its all-new Trident motorcycle overseas on October 30th. The middleweight naked will be positioned below Triumph’s Street Triple range. It will be launched overseas early next year.

From the previously released images, the middleweight naked looks compact. It gets a neo retro looking front end thanks to the round headlamp and single-pod instrument console. The rest of the bodywork seems inspired by the Street Triple. In terms of features, the motorcycle gets all-LED lighting and a digital instrument console.

According to Triumph, the upcoming motorcycle will feature a triple cylinder motor. While the British bikemaker has not specified any other details about the motor, we expect engine capacity to be between 600cc and 675cc. Triumph states that the motor will have a “perfect balance of low-down torque and top-end power” that will excite both newbies as well as experienced riders. Going by that, we can expect power output in the region of 80 to 85PS. Given that Triumph wants to make the motorcycle accessible to newer riders, it could feature electronic safety nets such as riding modes, traction control and switchable ABS.

Triumph showed us a running prototype that gives us a fair inclination of the underpinnings. It gets a tubular frame with upside down forks and monoshock. Braking is via twin front discs with axially mounted Nissin calipers and a rear disc with floating calipers. The test bike appears to be running on Michelin Road 5 radials, which we can affirm are fantastic all-weather tyres.

Triumph will manufacture the Trident in Thailand, from where it will be exported to the rest of the world. It will come to India via the CBU route sometime later next year. We expect the Triumph Trident to be priced around Rs 7.5 lakh. It would compete with other entry-level middleweight nakeds such as  the Honda CB650R, Benelli TNT 600,  Kawasaki Z650, and the incoming Suzuki SV650.