This week included a bunch of unveilings, from the Taigun’s interior to the facelifted Kodiaq 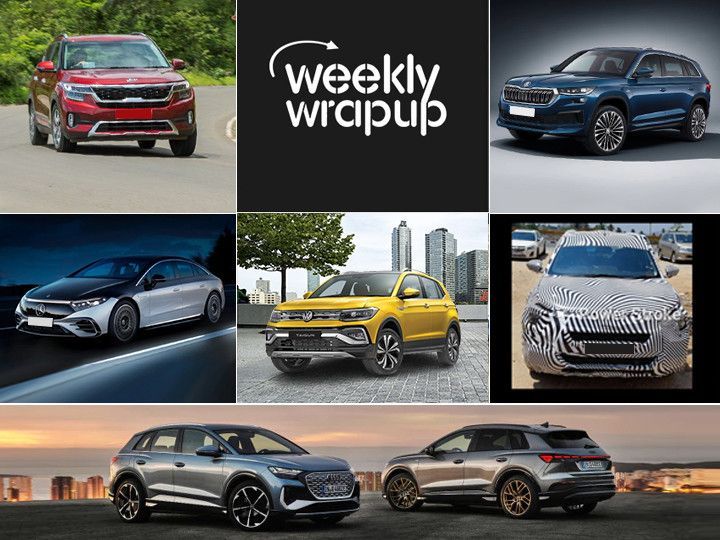 We’ve been waiting to get a look at the Taigun’s interior for a while now. When it was first unveiled, we were only allowed to shoot the exterior. Now, Volkswagen has given us a digital render of the production-spec Taigun’s interior. Take a look here.

After giving us glimpses through a bunch of teasers, Skoda has finally given the Kodiaq a mid-life update. The additions include more tech, sharper looks, and a plethora of powertrain options. We’ve also been told it will arrive in India as a completely knocked down (CKD) unit. Head here for more details.

Audi has revealed the Q4 e-tron and Q4 e-tron Sportback. It is laden with tech such as augmented reality, head-up display, adaptive cruise control, and optional Matrix LED headlamps. It is available in three variants: 35, 40, and 50. For more details, head here.

Kia Seltos Petrol To Get An iMT?

Kia’s Seltos could get upgraded as soon as April 27. We expect it to get additional features, a new Gravity Edition variant, and the updated logo. The Seltos could also be offered with an iMT clutchless manual transmission option. Check out the full story here.

Citroen assures that its first made-in-India sub-4m SUV is on track for a 2021 launch. The Nissan Magnite-rivalling SUV could be revealed as soon as May unless the current pandemic ruins the party. It could feature connected car tech, a sunroof, and a large infotainment system. Prices are likely to start from Rs 6 lakh (ex-showroom).

Mercedes-Benz has debuted the electric equivalent of the S-Class: the EQS. If we had to describe it in one word, it would definitely be ‘insane’. Some of the highlights include a massive 55.5-inch MBUX Hyperscreen, a drag coefficient of just 0.20, and eye-watering looks. The Tesla Model S and Audi e-tron GT rival can go from 0-100kmph in just 4.3 seconds with a staggering output of 523PS. Check out the EQS in detail here.