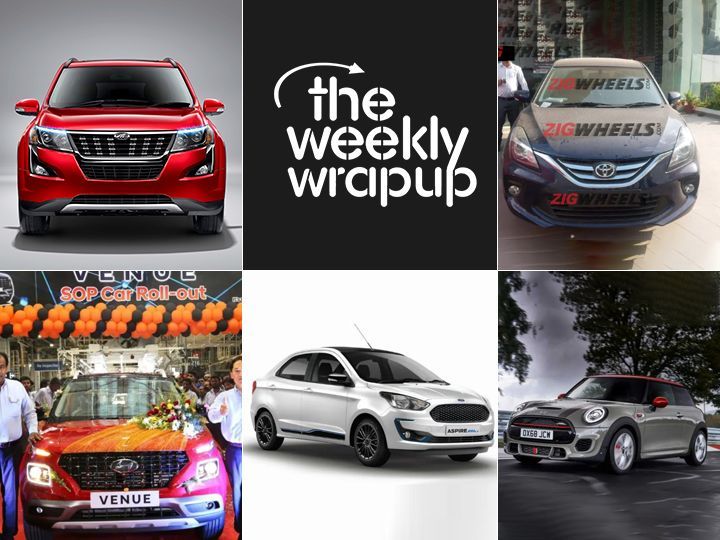 This week was an action packed one thanks to plenty of launch news. Toyota’s Glanza finally got a launch date, while the Aspire and XUV500 got new variant additions. Hyundai has commenced mass production of the Venue and last but not the least, Mini finally got its hardcore JCW to India this week.

While Toyota had teased the exteriors of the Baleno-based Glanza before, the carmaker kept mum regarding its interior. We received some spy shots of the interior this week and just like the exterior, the interiors are almost the same as its Maruti cousin apart from a Toyota-badged steering wheel. Apart from that, the launch date for the Glanza has been confirmed. Head here to know about the launch date and other details of Toyota’s first premium hatchback for India.

Ford Aspire Gets The Blu Treatment

If owning a Mahindra XUV500 has been a dream and is a tad out of reach for you, fret not. It can now come true as the carmaker had launched a new W3 base variant to grab a slice of the pie from the hot-selling Harrier. Priced Rs 58,000 less than the W5 variant, it does miss out on plenty of features like an infotainment system, rear wash and wipe and more. But if you want a basic and spacious 7-seater SUV to ferry your family around and tackle rough terrain, look no further. To know the price and other details of the XUV500 W3, head here.

Hyundai Rolls Out Its First Venue

The first Venue has rolled out from Hyundai’s Sriperumbudur factory. The Korean giant has also begun mass production of its compact SUV.  Bookings have also commenced and you can book one for a token of Rs 21,000. The compact SUV, which will also be the first car in India to get the connected Blue-link tech, received more than 2000 bookings in 24 hours. It will be powered by three engine options and be available in a total of 11 variants. Prices for the Venue are expected to start from Rs 7.2 lakh and go up to Rs 12 lakh (ex-showroom).

Last but not the least, the ultimate Mini John Cooper Works has finally landed in India this week. The JCW is coming in as a CBU and is priced at Rs 43.50 lakh (ex-showroom pan-India). The JCW gets a bonkers 2.0-litre turbocharged petrol motor that punches out 231PS and 319Nm of torque. Mated to a 8-speed automatic, the JCW sprints to 100 kmph in 6.1 seconds. To know more about the JCW, head here. Also stay tuned for the ZigWheels review that will be coming up soon.