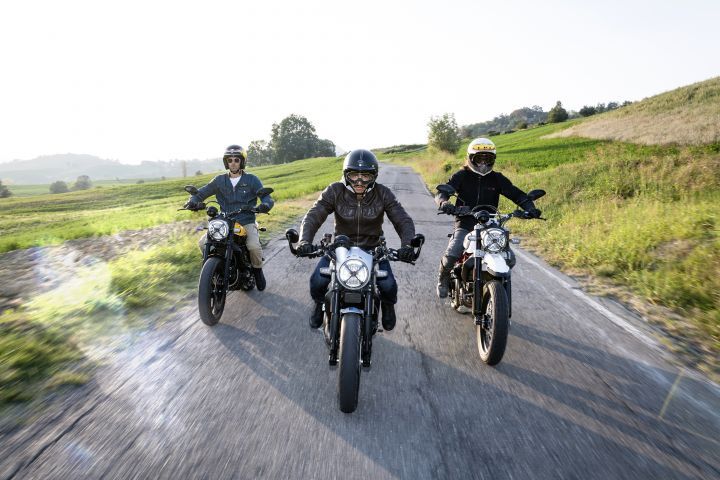 First shown prior to the start of the 2018 Intermot, Ducati has brought their Scrambler 800s to the Ducati World Premiere (and in a few days to EICMA 2018) as well. While the changes aren't drastic, Ducati has improved upon the neo retro styling of the Scrambler.

Aesthetically, the main changes come in the form of the updated headlamp and information cluster, both of which are derived from the bigger Scrambler 1100 that was launched in India a couple of months ago. The headlights are full LEDs and house a cross inside that adds to the bike's rugged character. The round instrument cluster is quite similar to the old one, but now, it’s Ducati Multimedia System ready.

Under the skin, there’s the same trellis frame, but it now gets improved suspension components. Although we are yet to get our hands on one, we hope that this gem of a Scrambler is more capable than before. It is still powered by the 803cc L-twin air-cooled motor that continues make 73.4PS and 67Nm of torque. While there is no change in the six-speed transmission, the bike gets a hydraulic clutch which should make life easier. It also gets a span-adjustable clutch lever to suit the rider.

But the biggest update for the Scrambler 800 models has to be the addition of Bosch Cornering ABS. The added safety net allows for the rider to bring the bike to a dead halt safely even when you begin braking when leaned over.

Each of the Scrambler 800 models gets a new set of colour schemes that accentuate their presence. While we have no word from Ducati India as to when the bikes will be available in India, a wise guess would be around early 2019. Expect a bump of Rs 60,000 over the current retailing price of Rs 7.23 lakh (ex-showroom Delhi). Stay tuned to this space for more!