The Mind-bending Mclaren Speedtail Is Here

It seats three, does 403kmph, looks like a million bucks and costs even more! 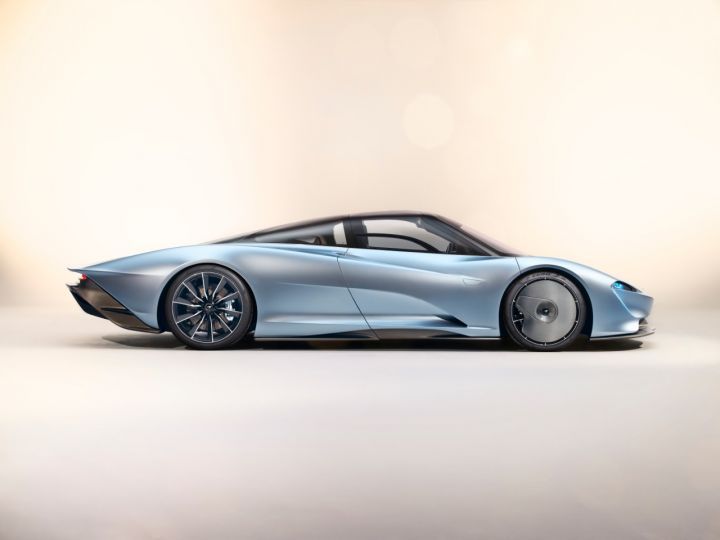 After months of teasers, Mclaren has finally taken the wraps off its Speedtail, the spiritual successor to the iconic Mclaren F1 hypercar from the 90’s. Wrapped in carbon fibre that bends for aerodynamic stability, the Speedtail is the most radical-looking hypercar to come out of Mclaren’s stables in a long, long time.

The Speedtail is built around a bespoke McLaren monocage carbon fibre structure and benefits from lightweight engineering throughout, including an all-carbon fibre body, aluminium active suspension and carbon ceramic brakes. This makes it the most aero-drag efficient Mclaren road car till date.

Heavily influenced by the Gordon Murray-designed F1, the Speedtail borrows its concepts and takes them to the next level. One of the most striking among them is the classic teardrop shape that is so essential in being slippery through the air. The Speedtail thus has a teardrop-shaped cockpit and a dramatically elongated, aerodynamically optimised, 5.2-metre carbon fibre body to minimise the drag as much as possible. Just like the F1 the Speedtail has unique three-seating configuration inside as well.

In essence, the Speedtail has been designed to go as fast as possible. Mclaren has gotten rid of everything that could slow it down. At the front, it has drastically narrower ducts and air intakes than any of its other siblings and Mclaren has designed the hypercar to direct airflow at high speeds through the path of least resistance. Inlets at the front of the car ease air through the sides of the Speedtail, around wheel arches and through door vents.

The required flow of air to the powertrain is maintained with two intakes that slope downwards, starting just behind the glass canopy. The intakes curve down into the engine cover and completely merge into the bodywork to stop airflow separating from the car’s surface.

The attention to aerodynamics on the Speedtail is just mind-boggling as it even boasts of retractable digital rear-view cameras to replace traditional door mirrors to further reduce drag.

The sleek and intricate aerodynamics of the Speedtail are matched by a monstrous 1050PS petrol hybrid engine under the hood. The petrol-electric powertrain can propel the Speedtail from 0-300kmph in a mind-numbing 12.8 seconds! It also enables the Speedtail to break the F1’s top speed record of 243mph (391kmph), set in 1993, by a significant margin.

The top speed of 403kmph (250mph) is achieved in a unique Velocity mode, which has been developed specifically for the Speedtail. Velocity mode optimises the hybrid powertrain for high-speed running, while also tailoring the angle of the active rear ailerons. Additionally, the digital rear-view cameras can be retracted to further improve drag. Furthermore, the Velocity Active Chassis Control can lower the Speedtail by 35mm, leaving the highest point of the vehicle just 1,120mm from the road surface.

The current top speed record for road cars is held by the Koenigsegg Agera RS at 277.87mph (447.19kmph). That said, it is not currently known if McLaren plans to try and better this as well.

The Speedtail certainly looks a car like no other. And with just 106 units to be ever built (which are already sold out) it is among the most expensive hypercars of its time as well, with a sticker price of over 1.75 million pounds (Rs 16.50 crore). It is also significant that this is the first of 18 new cars or derivatives that McLaren will introduce as part of its Track25 business plan, and thus holds a special place for the marque carmaker.

What do you think of the new Mclaren Speedtail? Do let us know in the comments below.