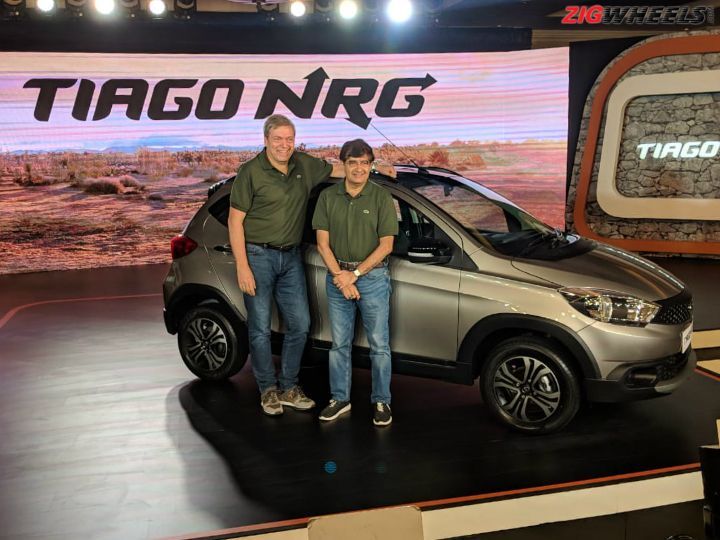 Tata Motors has launched the cross-hatch based on the Tata Tiago. Called the Tiago NRG, it is priced as follows (ex-showroom Delhi):

What's different on the outside?

Not much. You will instantly know this car is a Tiago. But since there's a lot of rugged elements (read: cladding) added in, it has altered the dimensions of the vehicle ever so slightly. Take a look:

The other aesthetic changes you'd instantly pick on are the increased ground clearance (180mm vs 165mm) and the addition of new 14-inch dual-tone alloy wheels. SUV-inspired elements such as faux skid plates and roof rails are in place too. To distinguish the NRG from the regular Tiago, Tata has blacked out bits like the door handle, the mirror, and also applied a sticker on the C-pillar. There's some cladding on the hatch door too, just to drive the point home.

That’s identical to the Tiago in terms of the layout, fit and finish and space on offer. You still get a whole host of features including manual AC, chilled glovebox, steering-mounted audio controls and an 8-speaker Harman audio system. But, instead of a plain 2-DIN audio unit, the NRG borrows the 5-inch touchscreen from the Tigor.

Another small change can be seen in the form of orange highlights that are splashed on the dash (around the AC vents), the gear lever, and on the stitching on the seat.

Anything new under the hood?

Nope. You’d find the good old 1.2-litre three-cylinder petrol engine and the 1.05-litre diesel. The petrol motor still makes 85PS/114Nm, whereas the diesel makes 70PS/140Nm. What’s interesting is that Tata has chosen to not offer the AMT with the NRG, and so, it is available with a 5-speed manual only. Since there isn’t a big difference in the kerb weight of the cross-hatch compared to the hatchback, we expect the NRG to perform similarly. That said, do stay tuned to ZigWheels for a detailed road test review.

What else can I buy for the same amount of money?

The Tiago NRG faces heat from the Renault Kwid 1.0 at one end, and the Maruti Suzuki CelerioX at the other. Its pricing also overlaps with a few variants of the Ignis and the Grand i10. So, there’s a lot to choose from.