Your search for a (really) compact crossover may be finally over 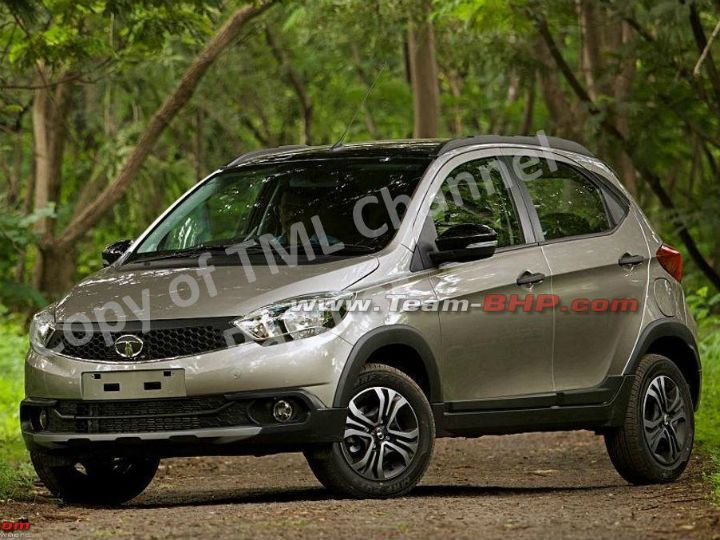 Tata is apparently getting ready to launch a new variant of their popular hatchback - called the Tiago NRG. The Tiago NRG (read ‘energy’) is to the Tiago hatchback like the Ford Freestyle is to the Figo hatchback - a cosmetically and slightly mechanically modified hatchback made to look like a crossover. It will be launched on 12 September 2018.

On the outside, the Tata Tiago NRG has a very unique stance thanks to the raised suspension which increases ground clearance by 10mm to 180mm. This raised stance along with ‘tough’ cosmetic additions like the new black body cladding all around the lower part of the bodywork, blacked grille, blacked out door handles, an all-new black-coloured boot applique and silver faux skid plates on the bumpers give it a fresh new look.

The ORVMs, pillars and the rear roof-mounted spoiler have also been blacked out, while large black roof rails finish off the ‘toughroader’ look. Finally, the Tiago NRG gets 14-inch dual-tone four-spoke alloy wheels. The additional cladding adds almost 50mm to the overall length of the Tiago and 18mm to the overall width. The overall height of the car has gone up by 52mm thanks to the additional ground clearance and the new roof rails.

Inside, the Tiago NRG has two main additions. The most important one of them being the addition of the 5-inch touchscreen infotainment system from the Tigor sedan, which is connected to an 8-speaker Harman audio system. Apart from this, the NRG gets orange and silver inserts around the cabin, including the dashboard and seats.

The engines and manual transmission will be carried over from the Tiago, meaning the NRG will be powered by the same 1.2-litre, 3-cylinder petrol motor developing 85PS/114Nm and the 1.0-litre, 3-cylinder turbo-diesel motor developing 70PS/140Nm. The transmission on offer, initially, will be a 5-speed manual. It is not known of the 5-speed AMT will be offered with the petrol engine. The additional equipment and cladding adds 5kg to the kerb weight of the Tiago.

Dual front airbags, ABS with EBD and cornering stability control, rear parking sensors will be offered as standard. Considering the addition of the 5-inch touchscreen infotainment screen, Tata could offer a reverse camera as well to make it more appealing. Expect the Tiago NRG to be priced marginally above the XZ petrol and diesel variants which are priced at Rs 5.19 lakh and Rs 6.00 lakh (ex-showroom Delhi), respectively.

But, all this begs the question - where’s the Tiago JTP, Tata?