How much has the Safari evolved since it first debuted over two decades ago? 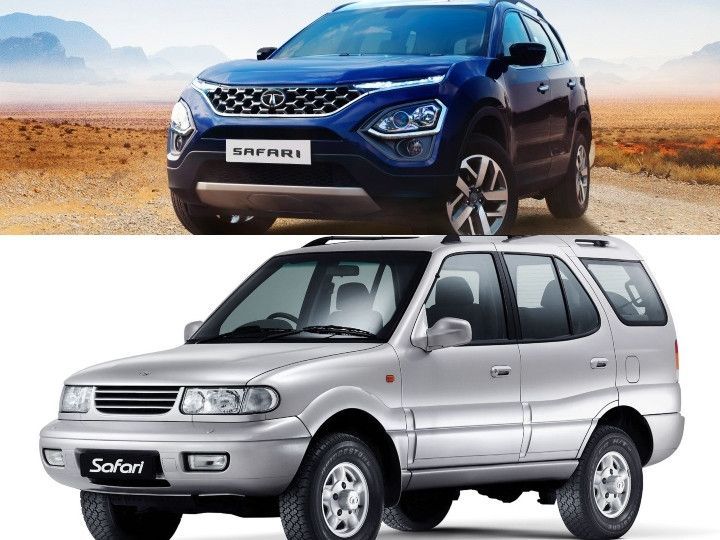 The Tata Safari was a trailblazer when it was introduced for the first time in 1998. India’s first indigenously developed SUV had quite a few factors going for it -- primarily its ability to tread anywhere and bang-for-the-buck sentiment. Fast forward 23 years, and Tata has taken the wraps off its latest iteration of the legendary Safari.

Despite being a Harrier-based, three-row SUV, there are things in common between the first-generation Safari and its latest descendant. Here’s us taking a closer look:

Surprisingly, the original Safari appears a fair bit longer due to the mounted spare wheel. However, the latest iteration gains an edge with its width and wheelbase, and additional stopping power, thanks to the disc brakes on all wheels. It also gets bigger wheels.

A similarity with the old Safari is the 2.0-litre turbocharged diesel engine. But, it's no surprise that the new Safari pulls ahead in both power and torque, producing almost double the power figures. While the 2.0-litre diesel was derived from Peugeot in 1998, the new 2.0-litre is sourced from the Fiat. It's also the first Safari to get a 6-speed automatic transmission. However, the older model has the advantage of a 2.1-litre petrol engine, which isn't there in the new offering as of now. Another difference is that all this power is distributed to the front wheels in the new Safari, whereas the original one that was a rear-wheel drive/four-wheel drive SUV.

No AWD For Now

While the new cousin has the edge in performance, there’s a significant feature missing -- a 4x4 drivetrain, which was one of the main plus points in the older Safari. That being said, the new model does get a few ESP-based drive modes to play with. Thankfully, Tata has confirmed that it could introduce an AWD drivetrain in the future, depending on the demand.

The first Safari utilised a body-on-frame platform, perfectly suited to driving on rough terrains but not so much on friendlier roads. However, the new model is built on a monocoque platform (like the Harrier), which will result in a more stable and consistent handling experience.

Another common factor between the two models is that they’re capable of seating seven people. But the difference here is that the old model featured jump seats, whereas the new model gets forward-facing seats. The new Safari also has a 6-seater option.

While the first Safari wasn’t exactly known for its features, its latest descendant will have plenty on offer, including an 8.8-inch infotainment system with Apple CarPlay and Android Auto, connected car tech, a 320W JBL sound system, 7-inch semi-digital instrument coloured display, and a panoramic sunroof. Other features will include automatic climate control, auto-dimming IRVM, powered driver’s seat, and an electronic parking brake with auto-hold function.

The 2021 Safari is likely to retail from around Rs 15 lakh (ex-showroom). That’s almost double the price compared to the first model that was launched at Rs 8.25 lakh (ex-showroom). On the brighter side, it’ll have more features on offer, house a beefier engine, get an automatic gearbox choice, and come in an optional 6-seater layout.

So is the new Safari a true successor to the original icon? On paper, yes, in certain ways. But is it as charming? Watch out for our first-drive review to know the answer. The 2021 Safari will be offered in six variants -- XE, XM, XT, XT+, XZ, and XZ+. Bookings will commence on February 4, with the launch expected later in the month.