The Italian marque has introduced three Dragster variants in India 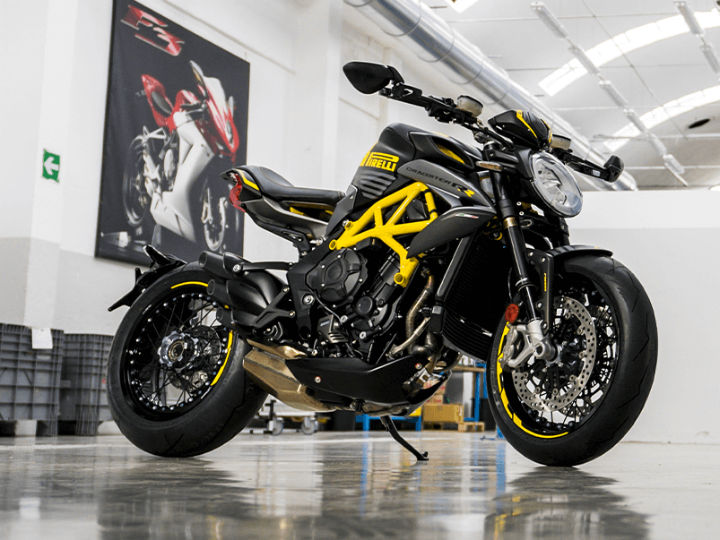 The base Dragster 800 RR might look like a more exotic version of the Brutale 800 and it is just that. It gets a different tail section, exotic wire wheels and other cosmetic updates like a revised front fender. The Dragster 800 RR America gets a unique stitched seats and colour updates in the form of a red, blue and white paint job as a tribute to the 1975 S America 750 motorcycle. The more exotic Dragster 800 RR Pirelli has been built in collaboration with Italian tyre maker Pirelli. This motorcycle features a fuel tank and fairing made of a specially formulated rubber compound that is resistant to scratches.

Also read: Expect Stunning Yet Affordable MV Agustas In The Near Future

All three motorcycles share the same 798cc 3-cylinder motor and in the same state of tune as the Brutale 800 RR. The max power output is rated at 140PS at 12,300rpm while peak torque is rated at 87Nm at 10,100rpm. That's litre-class naked territory! It is not lacking in kit either as it packs a fully adjustable Marzocchi upside-down fork, a Sachs monoshock, Brembo brakes and Pirelli Diablo Supercorsa radials. Electronics include an eight-level traction control, four rider modes and Bosch ABS with rear lift mitigation.

You can read the full press release below:

Motoroyale by Kinetic are exclusive distributors of MV Agusta in India

The Dragster series include:

National, 09 October 2019: Motoroyale by Kinetic, the exclusive distributors of MV Agusta in India, launches the MV Agusta Dragster Series. The series includes three variants, 800 RR, 800 RR America and 800 RR Pirelli. These superbikes are at the pinnacle of the sports naked segment with a perfect combination of design, technology and raw power.

Dragster 800 RR: Muscular, mean and a street fighter’s look with the heart of a three-cylinder engine. Nothing represents this concept and embodies the vision of MV Agusta better than the Dragster. Its powerful three-cylinder engine develops 140Hp at 13,100 rpm and a maximum torque of 87 Nm at 10,100rpm. The front fender’s side supports are made of aluminum, like the tank damper. The headlight has a new integrated light guide and the tail light is single-unit. The rev limiter is set at 13,200rpm with a fluid delivery at lower revs and an extraordinary acceleration.

Dragster 800 RR America: Italian Style; with an American flair. The name America has a special place in the history of MV Agusta. After the success of the first 3 cylinder Brutale America, the CRC (Claudio Castiglioni Research Centre) came up with a different interpretation of the Dragster 800 RR. The Dragster 800 RR ‘America’ features the same eye-catching color scheme, a mica blue base with iridescent reflections and horizontal graphic cuts. These are produced only in 200 units across

the globe, making it a true special edition. It also comes with a lightweight, compact inline three-cylinder engine. The balance shaft, primary gears, valves and cam phasing have been revised to elevate performance and reliability. To make it more attractive for the Indian market, Motoroyale by Kinetic launches this special edition at the same ex-showroom price of INR 18.73 lakhs.

The Dragster 800 RR Pirelli: A splendid result of an alliance between MV Agusta and Pirelli. Its gritty design with a black and yellow base and the distinctive Pirelli logo is exclusive to this model and makes it truly unmistakable. The tank and fairing are made of rubber specially formulated by Pirelli Research and Development technicians, to ensure superior resistance to scratches and rubbings. It continues to use the 798 cc liquid cooled 3-cylinder engine which pumps out about 140 hp and 87 Nm of extreme torque. Here, the engine is redesigned to a six-speed gearbox with a slip assist clutch, for a quicker and easy shift.

Speaking about the announcement, Ajinkya Firodia, Managing Director of Motoroyale Kinetic said, “As India’s only multi-brand superbike company, we are extremely proud to be associated with the holy grail of motorcycles: MV Agusta. Every MV Agusta series is special and carries a legacy of innovation, safety, speed and style. For us the Dragster RR and its variants are a perfect blend of raw power, technology and design, making it the top selling model for MV Agusta. I am certain that this model will be a great success in India considering the styling that suits the Indian road conditions. With this launch we have once again reinforced our objective of bringing the finest bikes in the world to Indian bike enthusiasts and are constantly working on building our exceptional product repertoire and service.

Motoroyale by Kinetic is the exclusive distributor of MV Agusta, Norton, SWM, FB Mondial and Hyosung bikes in India. The company currently has multi-brand showrooms in Thane-Mumbai, Vashi, Hyderabad, Chennai, Bengaluru and Kochi. Motoroyale is looking for the right dealership applicants and plans to open other showrooms in Delhi, Indore, Chandigarh, Ahmedabad, Jaipur, Kolkata and other important markets.