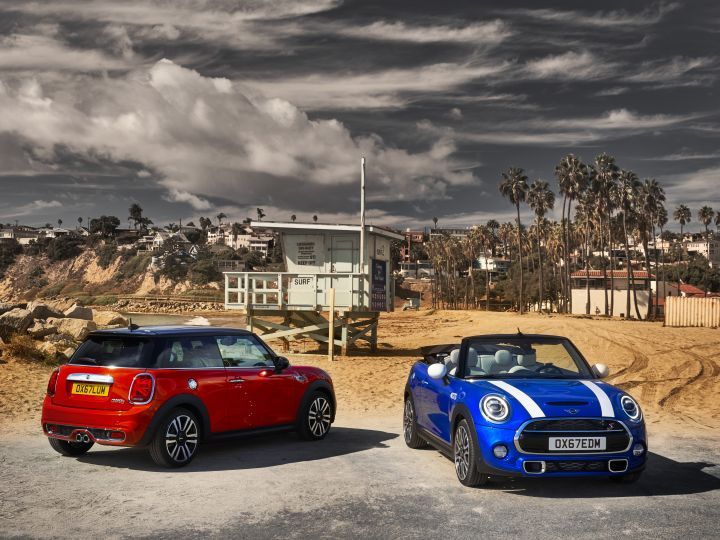 Mini has introduced updates for its quirky little hatchbacks in India for 2018. These 2018 updates bring them on par with the international models. All the three models of the family - the 3-door, 5-door and the 3-door Convertible have been updated, but there is no word on the JCW yet. Prices of the cars remain in the same ballpark as they are still being brought to us as CBUs.

All prices are ex-showroom pan-India. All of these cars will go on sale in June 2018.

There are some very fine but interesting details on the outside. Apart from the obvious new 18-inch optional alloy wheels, the cars also get the new Mini logo on the bonnet and tailgate. The headlamps too have been revised and now get a new lens design and LED daytime running light ring. There is also an option of Adaptive LED headlights with cornering and Matrix lights, should you wish to pay for them.

At the back, the now German-owned company's British roots are highlighted with a 'Union Jack' design on the taillamps.

Inside, the Union Jack finds a place on the dashboard (Excitement Pack), while the new logo can be found on the steering wheel, central instrument display and the remote control. There is a new steering wheel with mounted controls and new sports seats as well. There is also an optional panorama glass roof if you want to brighten up your day. The Excitement Pack further adds LED interior and ambient lighting with a choice of 12 colours and logo projection puddle lamp for the driver.

The iconic circular central display still retains the LED ring around it, but Bluetooth connectivity is now standard. You can also opt for a better 6.5-inch display with MINI Radio Visual Boost that "serves as an aesthetic display for managing functions related to infotainment, telephone, driver and the vehicle." If you want to go all out, then you also have the option of a 'Wired' package which will get you an 8.8-inch touchscreen with Touchpad controller, MINI Find Mate, Apple CarPlay, Navigation System Professional, MINI Connected XL, telephony with wireless charging, 2nd USB interface and a 20GB internal hard drive for all media storage. Paired to this is a 360 Watt Harmon Kardon System with 12 speakers and an eight-channel digital amplifier.

The transmission is now a 7-speed double clutch unit instead of the 6-speed automatic earlier. The dual-clutch unit gets shorter gear ratios, though the acceleration numbers are same as before.

The 2018 cars are available in 14 paint options, with three of them being new additions - Emerald Grey metallic, Starlit Blue metallic and Solaris Orange metallic. There is also an optional Piano Black paint for the Cooper S which gets you not only a black car, but also gloss black surrounds for headlights, tail lights and a gloss black grille, instead of chrome. These cars compete with the Mercedes-Benz A-Class and the Volvo V40 twins in the luxury hatchback segment.