The S-Cross will now be offered with a petrol engine for the first time. How do its new specifications compare against its rivals? 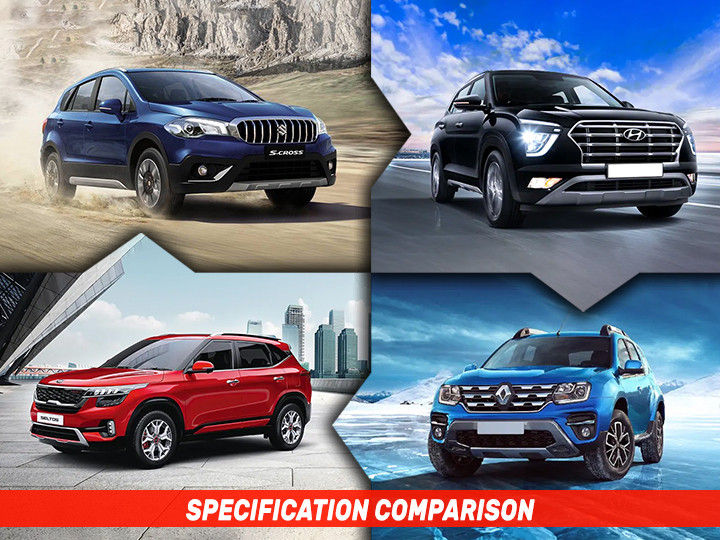 We all know that the updated S-Cross is all set to be launched on August 5. For the first time in its life, the India-spec model will now come with a 1.5-litre petrol engine along with an automatic transmission instead of Fiat’s 1.3-litre diesel engine.

The question is: How does the new 1.5-litre petrol engine fare against its rivals: the Hyundai Creta, Kia Seltos and the Renault Duster? Let's find out.

Note: Since the S-Cross comes with a naturally aspirated petrol engine, we have compared it against its rivals with similar specifications. The Seltos and Creta are offered with turbo-petrol engines while the Duster is set to get a 1.3-litre turbo-petrol unit.

All these models come with 1.5-litre petrol engines. However, the S-Cross is the least powerful in this test while the Creta and Seltos lead the chart. The Duster is just 1PS/4Nm more powerful than the S-Cross but cannot match the Hyundai or Kia.

Sure, those who would have driven the diesel S-Cross might miss its punchy nature. But the petrol S-Cross could come with a mild hybrid system which features torque assist under hard acceleration. That said, this S-Cross is likely to be best suited for relaxed driving.

All four models here are offered with a manual gearbox. But surprisingly, the Renault is the only one here that doesn’t feature an automatic transmission. The S-Cross comes with an old-school 4-speed torque converter while the Hyundai and Kia utilise a more modern CVT that’s way smoother.

The S-Cross is likely to be priced from Rs 8.5 lakh to Rs 12 lakh, putting it in the ballpark of Hyundai’s Creta and Kia Seltos’ entry-level variants. Would you pick the S-Cross over the similarly-priced variants of the rivals? Let us know in the comments section below.