It was displayed at Auto Expo 2020 in concept form 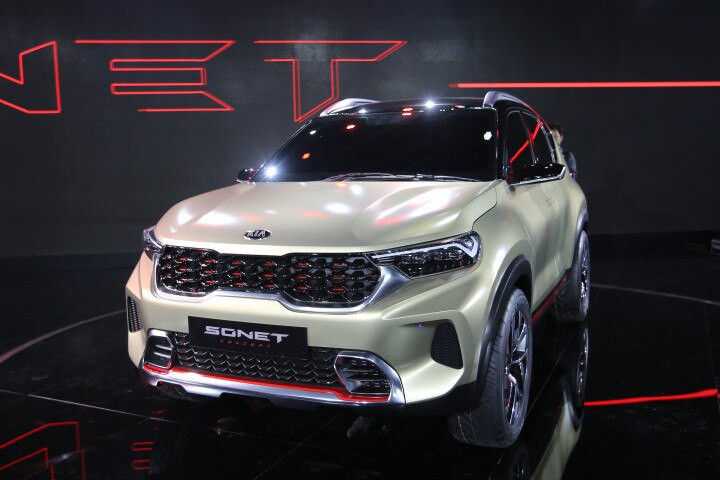 Kia Motors’ third offering for India, the Sonet, made its debut in concept form at Auto Expo 2020 in February.  The production spec has also been spied testing on Indian roads. While we know that it will be launched in the second half of this year, a specific date is yet to be revealed. However, the carmaker’s earlier announcement of launching vehicles every six months gives us a clue of the Sonet’s potential launch date. Kia’s Indian assault started with the Seltos SUV in August 2019, with the Carnival MPV launch following in February 2020. With this trajectory, Kia could launch the Sonet in India in August 2020, like it did with the Seltos a year ago.

On the outside, it essentially looks like a scaled down Seltos with bits like a smaller but sharper version of Kia’s trademark tiger nose grille, paired with headlamps and swanky DRLs. It features an upright stance and squared-out wheel arches that give it an SUV-like look. At the rear, the SUV gets connected tail lamps.

Interior spy shots reveal similar styling cues to the Seltos such as the dashboard layout, the floating touchscreen infotainment system merging onto the instrument panel and a 3-spoke steering wheel.

But there are distinct bits as well, like a redesigned central console with vertical AC vents and redesigned climate control knobs. It will get features like a 10.25-inch infotainment system, a Bose sound system, climate control and connected car technology. Also expect equipment such as Android Auto and Apple CarPlay, a wireless phone charger, cruise control, and keyless entry with push button start. Safety kit could include 6 airbags, rear parking sensors with rear view camera and ABS+EBD.

Under the hood, the Sonet could be powered by two petrol engines and one diesel. The petrol options could be an 83PS 1.2-litre Kappa from the Hyundai Venue and a 125PS 1.0-litre T-GDI petrol engine. The diesel mill could be a detuned version of the Seltos’ 1.5-litre CRDI motor.

As things stand, this potential launch timeline could change due to the global outbreak of coronavirus causing lockdowns all over the country. Expect prices for the Sonet to start from Rs 7 lakh (ex-showroom). Once launched, the Sonet will take on the likes of the Hyundai Venue, Ford EcoSport, Tata Nexon and the Mahindra XUV300.