Meet The Kia Mohave Gravity. Would You Pick This Over A Toyota Fortuner? 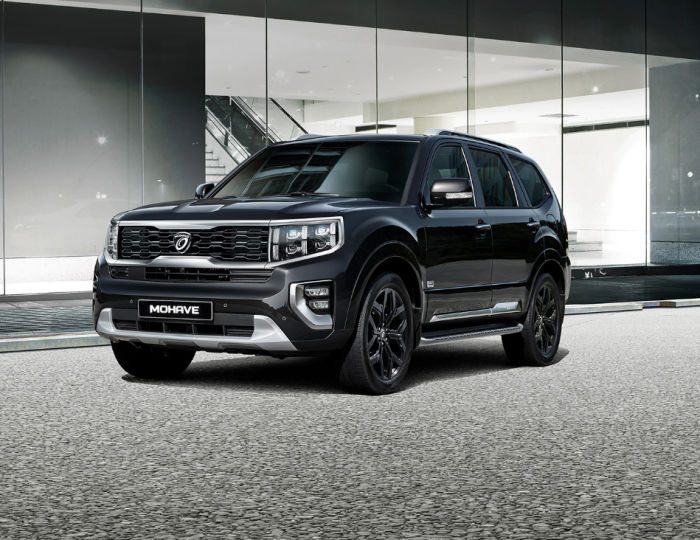 The stylish Telluride is often considered as the biggest SUV from Kia. But sitting above the Telluride as Kia’s flagship offering is the Mohave Gravity. Unveiled in its latest guise, this full-size, body-on-frame SUV with 5/6/7 seater configurations is packed with enough firepower and features to tussle with the Toyota Fortuner and Ford Endeavour, provided it finds its way into India. Here are 10 images of the Mohave to give you an idea of where it stands in the race

First impressions. The Kia Mohave Gravity is boxy and its got presence, bucket loads of it. It sports an understated design complemented by generous use of chrome. The headlights and the tiger nose grille are the most striking design elements when viewed from the front.

We can count four projector units accompanied by three DRL strips on each headlamp. Upon closer inspection, one can also see that the grille follows more or less the similar design pattern. The rear and side profile of the Mohave follows an old-school approach with massive windows and large tail lamps that mimic the LED pattern up front. The tail lights on either side extend into the boot lid, making it one single unit.

Underneath that boxy body is a ladder-on-frame chassis and a 3.0-litre V6 diesel that develops 260PS of power and 560Nm of torque. The Mohave sends power to all four wheels via an 8-speed automatic gearbox. There’s a 4×4 Low mode along with six other driving modes: Comfort, Eco, Sport, Sand, Mud and Snow.

Here’s a closer look at the mood lighting and the three-dimensional pattern mood lamp.

Here, you can see the 6-seater layout in action along with the captain seats for the middle row.

The 5-seater layout with bench seats for the middle row.

Kia is pitching the Mohave as a premium offering and a special one at that. We don’t know if you’ve noticed it yet, but the Mohave doesn’t sport a single Kia badge on the outside. Prices for the Mohave Gravity start from 55,470,000 South Korean Won (around Rs 35 lakh) which puts it in the same bracket as the Ford Endeavour, Toyota Fortuner and the Mahindra Alturas G4 sold in our domestic market.