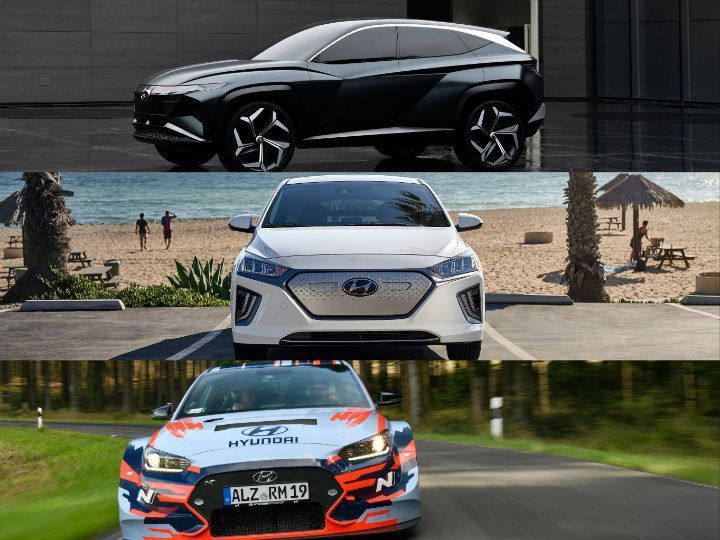 Hyundai Motors finally unveils its lineup for the 2019 LA Auto Show with 5 brand new debut models. It starts off with its vision of the future in the form of the Vision T Concept SUV that certainly looks like a positive direction for the brand. Next up is the refreshed 2020 IONIQ Electric,Hybrid and Plug-in-Hybrid. And finally we were treated to raw performance goodies from Hyundai’s N brand with the RM19 race car prototype. Here’s all you need to know about Hyundai’s new debuts at the 2019 Los Angeles Auto Show.

After teasing this concept SUV in a video, Hyundai has finally taken the wraps off the Vision T plug-in-hybrid SUV concept at LA. It incorporates the carmaker’s Sensuous design familiar in the Sonata with similarities like the cascading grille design. It also carries some bits from the Kia Futuron concept like the illuminated grille. Another interesting tidbit in the grille is active flaps for aerodynamic benefits. Squared-off wheel arches and tail lights connected by a lightbar make up the exterior look.

Judging from these images, it could very well be a glimpse of the next-gen Tucson due to certain similar elements like the front-end design. Another common factor between the two is that the concept SUV is a hybrid offering with the Tucson also expected to get one. Hyundai has yet to reveal the detailed specifications of the powertrain.

Second in Hyundai’s lineup is the North American debuts of the refreshed 2020 IONIQ lineup consisting of the Electric, Hybrid and Plug-In-Hybrid variants. The updates in the Electric trim include a bigger battery from 28 kWh to 38.3 kWh that increases the range from 124 miles (200km) to 170 miles (273 km) on a single charge. It also gets a power boost at 134PS compared to 118PS in its predecessor.

The Hybrid and Plug-In-Hybrid IONIQ trims remain mechanically unchanged powered by a 1.6-litre four cylinder mill mated to a 1.56-kWh and an 8.9-kWh battery pack. The hybrid trim produces 139PS/264Nm whereas the plug-in-hybrid delivers 156PS/264Nm and 29 miles (46km) of pure electric range. Both are mated to a 6-speed DCT.

Exterior upgrades to the 2020 IONIQ include a new grille, revised front and rear bumpers and new wheels. Interestingly the new grille differs with the hybrid and PHEV getting a mesh grille, whereas the electric trim getting a unique pattern. The bigger changes are inside with features like a revised dashboard and instrument panel, 7-inch LCD console display, and a standard 8-inch touchscreen infotainment system with Apple Car Play and Android Auto. A 10.25 inch touchscreen is also available as an option. Other features like Hyundai’s SmartSense safety kit gets equipment such as collision avoidance assist, high beam assist, and drivers attention warning. Prices start at $23,000 for the hybrid and $26,300 for  the plug-in-hybrid. Pricing for the electric trim is yet to be revealed.

Hyundai’s N division is well known for making performance oriented products like the Veloster N, Elantra N as well as the i10 N-Line. It also works on radical prototypes for the carmaker’s motorsports commitments. And now we get to see its latest contraption, the RM19 Prototype Race Car.

It is essentially a mid-engined Veloster powered by a 2.0-litre turbocharged four-cylinder petrol mill from the TCR race car, producing 390PS of power. It is mated to a 6-speed sequential gearbox to power the rear wheels and propel it from 0-100kmph in less than four seconds. It tops out at speeds in excess of 250kmph. The carmaker has also hinted at a possible electric powertrain for the future.

Race-spec tweaks include a large front-splitter, fender extensions, a rear-wing and a diffuser. Air vents replace the rear windows to provide air to the mid-mounted engine. Interior tweaks include bolstered sport seats and a race-spec steering wheel. The RM19 will serve as a platform for future N models with the carmaker aiming for supercar performance levels.