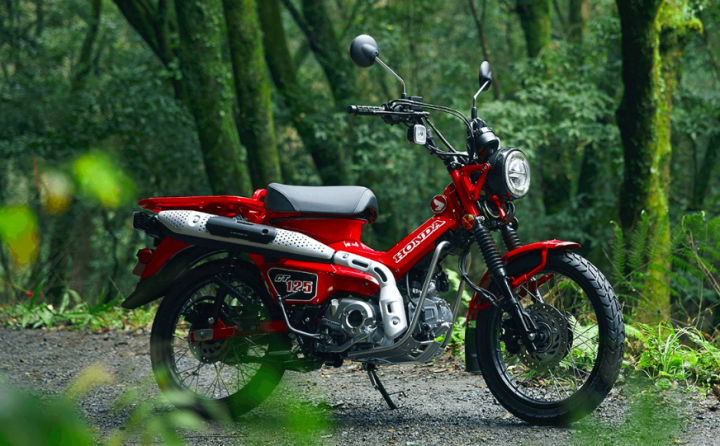 Two-wheeler enthusiasts have something to look forward to once the world recovers from the COVID-19 pandemic. Honda’s little off-road moped, the CT125 Hunter Cub, which got the green signal for production in November 2019, has been launched in Japan. It’s priced at JPY 440,000 including taxes, which is around Rs 2.99 lakh in India. The CT125 Hunter Cub will also be sold in Europe and America as ‘Trail 125’ with two colour options: red and brown.

The moped, which is inclined more towards trail riding, is based on the revamped Super Cub 125, Honda’s most successful two-wheeler model of all time. However, the CT125 Hunter Cub gets off-road components to suit its demeanour and rugged bodywork to take the extra beating. For instance, although the frame’s borrowed from the Super Cub, the yoke has been reinforced for more off-road strength while the rear section has been extended for extra luggage.

Also Read: The 2020 Honda CBR250RR Is More Powerful And Feature-laden Than Before

Longer suspension travel means the CT125 Hunter has 165mm of ground clearance to play with compared to the Super Cub’s 125mm. Its off-road prowess is further aided by a pair of spoked wheels wrapped in dual-purpose tyres and a bash plate.

Moving on, there’s a new high-mounted intake duct, which keeps clear of dust and water, and a high exhaust system. Thanks to this and the above-mentioned changes, the CT125 Hunter weighs in at 120kg -- 11kg more than the C125 Super Cub.

It draws power from the same 124cc fuel-injected air-cooled engine that’s seen on the Super Cub, however, in a different state of tune. To put things into perspective, the CT125 Hunter Cub makes 8.8PS at 7000rpm, 0.8 less than the Super Cub. However, its torque output has risen from 10.43Nm at 5000rpm to 11Nm at 4500rpm. That's possible thanks to an altered final drive. It uses a 39-tooth rear sprocket as opposed to the 36-tooth design on the Super Cub, which offers a lower top speed but improves the motor’s torque and acceleration. It features a 4-speed transmission.

Also Read: Here’s What You Need To Know About Honda’s Upcoming Sports Bike

The Honda CT125 Hunter Cub may be an off-road-oriented moped, but that doesn’t mean it’s down on features. In fact, it’s lit with LEDs all around and gets a full-digital instrument console, a tail rack, and a 5.3-litre fuel tank under the seat. The Hunter Cub also features single-channel ABS, which means it could lock the rear disc while trail riding for some sideways action.

Unfortunately, the CT125 Hunter Cub will never see the light of day here in India, simply because it’s too expensive for a price-sensitive market like ours.