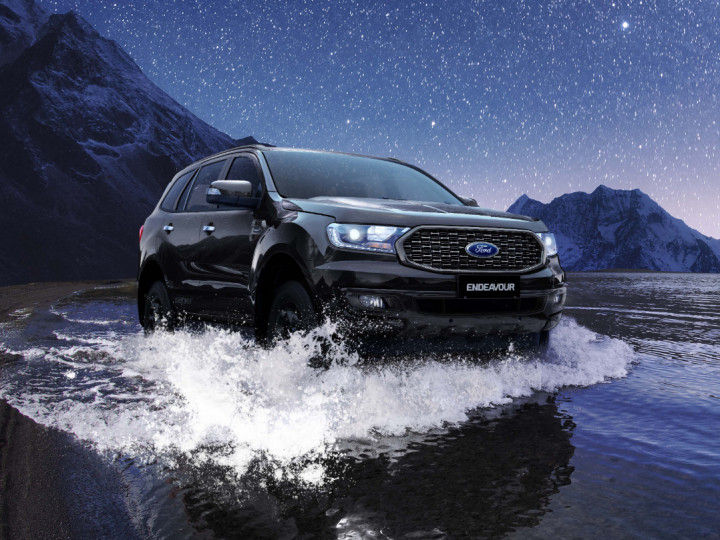 Ford India has launched the Endeavour Sport at Rs 35.10 lakh. Based on the top-spec Titanium+ 4x4 trim, the Sport Edition comes with blacked-out elements and rivals the recently introduced Toyota Fortuner TRD. The Endeavour Sport first went on sale in the Australian market. Here’s a price comparison between the Sport and Titanium+ trim:

Cosmetic changes include a new honeycomb mesh grille that replaces the standard model’s slatted unit. It comes finished in black and is flanked by smoked-out headlamps. The fog lamp housings are also finished in the darker shade as well.

The alloy wheels, which utilise a different design, are finished in erm… black while the ORVMs and roof rails are also finished in… you guessed it… black. At the rear, the faux skid plate on the bumper is finished in black. Topping up the changes are the Sport badges on the doors and tailgate.

The Endeavour Sport is offered in three shades: Diamond White, Diffused Silver and Absolute Black. The black option looks the stealthiest in this all-black Sport trim.

Step inside the Endeavour Sport and you’ll notice that the India-spec model utilises the standard version’s black-beige dashboard rather than the all-black theme found in the Australian-spec Endy. Ford could’ve used the all-black theme as it’d have befitted its Sport tag pretty well. The feature list is the same as the standard Endeavour and you can read about it by clicking here.

Powering the Endeavour Sport is a 2.0-litre EcoBlue diesel engine that develops 170PS of power and 420Nm of torque. It comes paired to a 10-speed automatic transmission, a first in India. Power is sent to all four wheels and you get off-road modes to play around with if you want to explore the beaten path.