Like the exterior styling, the interiors too are bang in line with its hatchback sibling - the Argo 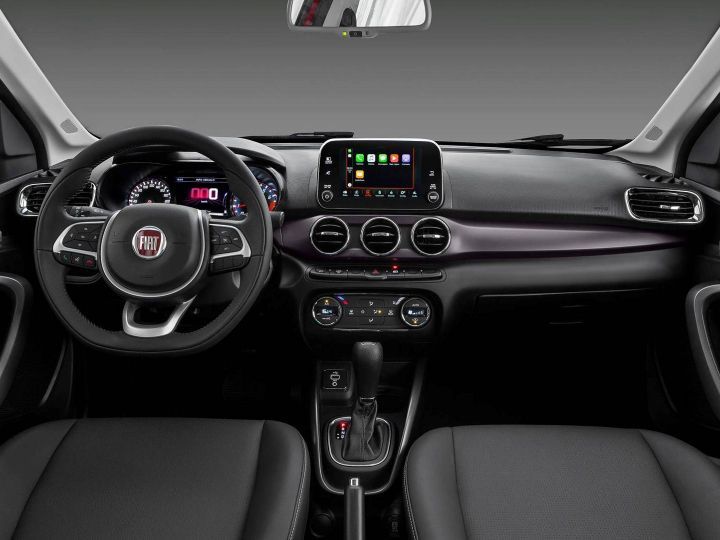 Fiat’s new entry-level sedan, the Cronos, is destined to go on sale in the Latin American market in the first quarter of 2018. About a month back, the Italian carmaker released a couple of shots of the Cronos’ exterior to give us a glimpse of what the sedan would look like when launched. In essence, the Cronos is the sedan-shaped sibling to the Argo hatchback, which went on sale in Brazil in June last year. Now, Fiat has released pictures of the Cronos’ interiors. And unsurprisingly, the sedan’s cabin is identical to the one seen in the hatchback.

Draped in all-black, the interior trim might look like a very Italian job at first glance. Look closely though and you’ll find hints of burgundy on the protruding centre section of the dashboard. The silver/chrome accents on the AC vents, door panels, centre console and the steering wheel add a dash of excitement to the overall aura of the cockpit. Mounted on top of the three centre AC vents is a 7.0-inch touchscreen infotainment system lifted from the Argo. Overall, we think the vibrant interiors certainly complement the stylish exterior design of the Cronos. As far as quality is concerned, it looks like Fiat’s compact sedan won’t falter while taking on its fiercest rival in the Brazilian market - the Volkswagen Virtus, which could be rebadged as the second-gen Vento when launched in India.

Unfortunately, apart from the pictures, the Italians haven’t included any specifications of the Cronos’ interior space, including its boot capacity. However, the new Fiat sedan is expected to trump the Virtus’ 521-litre trunk and score higher in terms of practicality as well.

The Cronos seems to hold a lot of promise from under the bonnet too. Fiat, in all probability, will offer the Cronos with the same set of engines as the Argo. That means a choice of 1.0-litre, 1.3-litre and 1.8-litre flex-fuel engines generating 72PS, 101PS and 135PS of power, respectively. While the 1.8-litre engine is likely to be offered with a 6-speed automatic transmission, all three engines will be equipped with a 5-speed manual unit by default.

As of now, Fiat India hasn’t announced whether it plans on launching the Cronos in our country. That said, we believe the Argo and the Cronos could be the ideal replacements for the ageing Punto hatchback and Linea sedan, respectively.