There was no repeat of the unpredictability of Silverstone in Spain 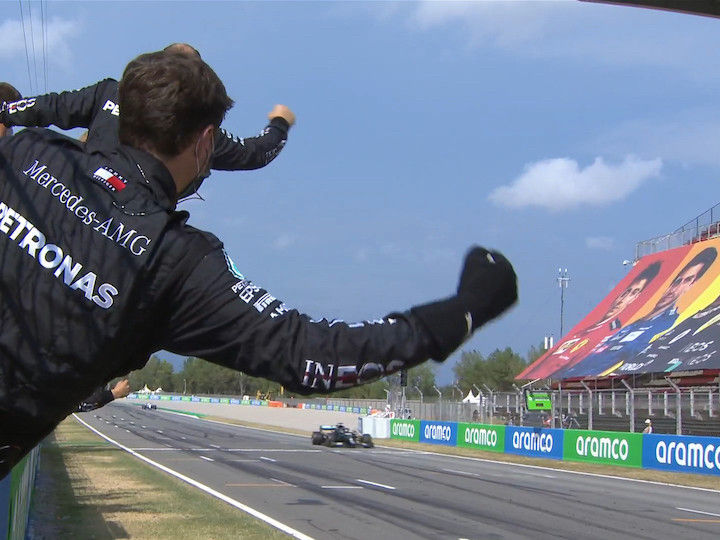 Well, we got a nice reprieve in the 70th Anniversary GP when Red Bull Racing-Honda’s Max Verstappen beat the dominant Mercedes team on merit. With the temperatures hot in Spain, F1 fans hoped there would be a repeat or at least a close race. No such luck on a venue where F1 holds its pre-season tests and which every team knows very well. Lewis Hamilton lived up to the formbook as Mercedes got back to winning ways with Verstappen doing everything he possibly could to beat at least one of the Mercs.

Lewis Hamilton - After almost losing the British GP and being beaten in the 70th Anniversary GP, a convincing win got Hamilton ‘back on track.’ It is ridiculous to think that the runaway leader in the best car in F1 needed to bounce back. Finishing 24 seconds ahead of Verstappen allowed the lead Mercedes driver to do just that and take his 88th career win. Given Mercedes’ unprecedented dominance it was a foregone conclusion that Hamilton will beat Michael Schumacher’s record tally of 91 F1 wins. Now it is just a matter of when in this season he will do so.

Max Verstappen - Denying Mercedes a 1-2 finish is about the best that the Dutchman can do on most days given the form the German manufacturer is in. Track position matters a lot at the Circuit de Barcelona-Catalunya so beating Valtteri Bottas at the start was vital for Verstappen. Initially it looked like Verstappen could remain close enough to Hamilton to challenge him later in the race. However, the Red Bull hit the limit of its performance and aside from bickering with his pitwall there was little by way of entertainment.

Sebastian Vettel - Eleventh in qualifying, seventh in the race and the only Ferrari to make it to the finish line. That goes down as a win for the beleaguered former champion. Especially so on a day when Vettel sounded like he was at odds with the Ferrari pit wall who were managing his race strategy. Such is the noticeable tension between Vettel and the team he is leaving, that F1 fans voted the German the ‘driver of the day.’ And why not? Making a set of soft tyres last as long as he did, running as high as fifth at one point and getting the team some points. Sounds like a job well done by a driver who would rather be as far away from Ferrari as possible.

Racing Point-BWT Mercedes - Their pre-season testing form at this very circuit made the F1 paddock sit up and take notice of Racing Point. Many had them pegged as the third best team after their testing form. That is exactly where they have ended up after their drivers Lance Stroll and Sergio Perez were fourth and fifth, respectively. Racing Point are third in the constructors’ championship even after losing the 15 points as a result of an FIA penalty. Their tally of 63 points (78 without the penalty) puts them ahead of McLaren-Renault and Ferrari who have 62 and 61 points.

Ferrari - We have Sebastian Vettel as one of the winners of this race but the same cannot be said of the team he races for. An electrical issue caused an engine failure after which the rear tyres on Charles Leclerc’s Ferrari locked up and forced the Monegasque driver to retire. Then the team was at loggerheads with Vettel over the best strategy in the race. And on top of it all, Ferrari slipped from third in the constructors’ championship to fifth by the end of the Spanish GP. Their fortunes may improve a bit over the next three rounds if Leclerc’s performance in Silverstone was any indication. The high speed Spa-Francorchamps, Monza and Mugello circuits could allow Ferrari to use the low downforce setup that helped them at Silverstone. But it only worked in favour of Leclerc, Vettel may be left twisting in the wind again.

Valtteri Bottas - Mugged at the start and relegated to fourth, never looking like being able to get back ahead of Max Verstappen and losing more ground to Hamilton in the drivers’ championship. Despite getting his 50th career podium, one can’t really call Bottas a winner in the Spanish GP. The Finn’s inconsistent form has made people realize just how unchallenged Hamilton is at Mercedes. Things may be close in qualifying but most certainly not when it comes to a full race distance.

Alexander Albon - The Thai driver is looking like he has no business being in the same team as Max Verstappen. Yes, the Dutchman is really fast and consistent, but Albon’s inability to score podiums while driving the same Red Bull car is costing the team a bit. Given how far the gap between the two Mercedes drivers and Verstappen is to the rest of the field, it is unlikely to cost Red Bull second in the constructors’ championship. With Daniel Ricciardo long gone, Verstappen does appear to be in the same position at Red Bull as Michael Schumacher used to be at Benetton and Ferrari. The undisputed number one, miles ahead of the ‘number two’ driver. Albon appears to have been relegated to that position at the moment. An eighth place in the Spanish GP gives Albon 40 points for the season, but Verstappen’s second place puts him on 95.