Elegant A5 Comes Our Way In October 2017 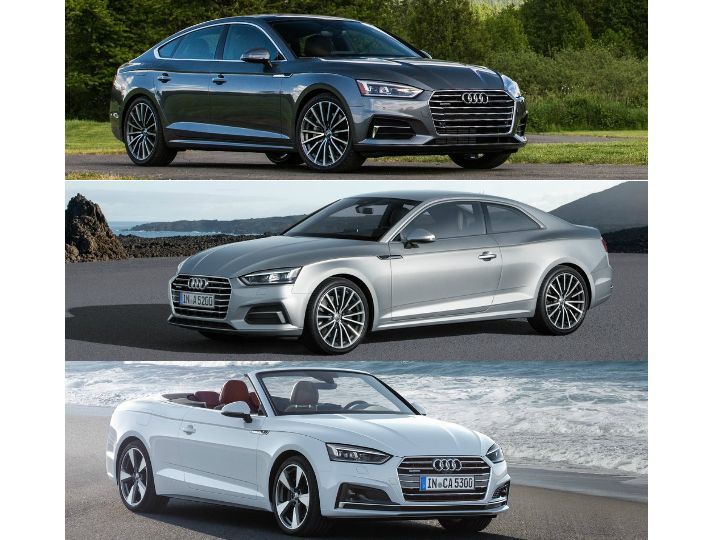 Audi India is set to launch the A5 in India on October 5, 2017. The second generation A5 was revealed internationally last year, seven years after the first gen model made its debut. The A5 was a unique product from  Audi for being one of only three coupes in the company’s lineup, the other two being the TT and the R8. It is the perfect car for those who want the compact-luxury feel that the A4 offers but in a more stylish package.

Audi India has not confirmed which body styles of the new A5 will be offered in India, internationally it is available as a four-door coupe (the Sportback), a two-door coupe and a two-door convertible - all of which have never been launched in India. Many of you may be familiar with the hotter Audi S5 and Audi RS5 versions though, these were some of the most value-for-money performance cars you could buy earlier.

The new Audi A5 has a similar elegant, swooping design like its predecessor but gets a whole of sporty detailing all around as Audi’s new range of cars. The car has grown in size in almost every direction, especially in terms of the wheelbase.

Highlights at the front include new LED headlights similar to that of the new A4, a heavily sculpted bonnet, Audi’s signature ‘Singleframe’ grille and a sharper looking bumper.

At the side, the A5’s signature flowing shoulder line is still present but is more noticeable than before. The A5 coupe and Sportback feature frameless doors which add to the special feeling. Wheel sizes range from 17- to 19-inches.

At the rear too, the sharp styling theme continues. Highlights here include the integrated boot spoiler, all-LED 3D taillights and sculpted bumper.

Inside, the elegant design continues. The use of multiple materials inside makes the cabin feel luxurious and striking. Audi has used horizontal elements to cram in more features without making the interior look too cramped, especially on the dashboard. Multicolor ambient lighting is also available.

While the standard instrument cluster in the A5 is an analogue-digital unit with the standard analogue speedometer and rev-counter with a 5-inch or 7-inch central DIS, Audi India will most probably also offer the 12.3-inch all-digital ‘Virtual Cockpit’ instrument cluster here. The smartphone compatible (with Android Auto and Apple CarPlay) infotainment system’s main display is a 7-inch or 8.3-inch screen on the centre console. An optional 755-watt, 19-speaker Bang & Olufsen surround sound system should add to the premiumness of the cabin.

Audi claims that it has been able to free up more space on the inside of the A5 for both the front and rear passengers. The 40:20:40 split folding rear bench and almost perfectly shaped luggage space also makes the A5 a practical car too. The bootlid can be opened or closed electronically, a proximity sensor is also offered for increased convenience.

The Audi A5 in international markets are offered with many radar and camera-based safety systems including adaptive cruise control, traffic jam assist, emergency brake assist, collision avoidance etc. These may or may not be offered in the India bound A5.

Under the hood, the new A5 is expected to share its engines and transmissions with the A4, as it is based on the same platform. In India, this could mean that the A5 could be powered by the same 1.4-litre, 4-cylinder turbocharged engine developing 150PS of maximum power and 250Nm of peak torque paired to a 7-speed transmission. Internationally, the A5 is powered by a 2.0-litre petrol motor developing 190PS/320Nm or 252PS/370Nm.

Diesel powertrain could also be the same as the A4 - a 2.0-litre, 4-cylinder turbocharged unit developing 190PS of maximum power and 400Nm of peak torque paired to a 7-speed transmission. Internationally, it also gets an ‘ultra’ version of the same engine which is very efficient. The larger 3.0-litre, V6 turbo-diesel motor, available in either 218PS/400Nm or 286PS/620Nm performance trims may also be offered in India if Audi plans to position it as a performance car than a fancier version of the economical A4.

If Audi decides to launch the Coupe or the Sportback variant of the A5 in India, they will have no competition to worry about at all. Insiders tell us that the A5 Cabriolet is high on the company's India-launch priority list, it will be powered the 2.0-litre diesel engine.

Expect the Audi A5 to slot in between the A4 and the A6 range of cars, with prices ranging from Rs 44 lakh to Rs 50 lakh, ex-showroom.

5 supercool features of the Audi A8

This is the next-gen Audi RS 5

Audi A4 with diesel engine launched