Dakar 2019 Stage 4: All Survive The First Part Of The Marathon Stage

Ricky Brabec storms to take lead in the Moto class, Nasser extends his advantage in cars 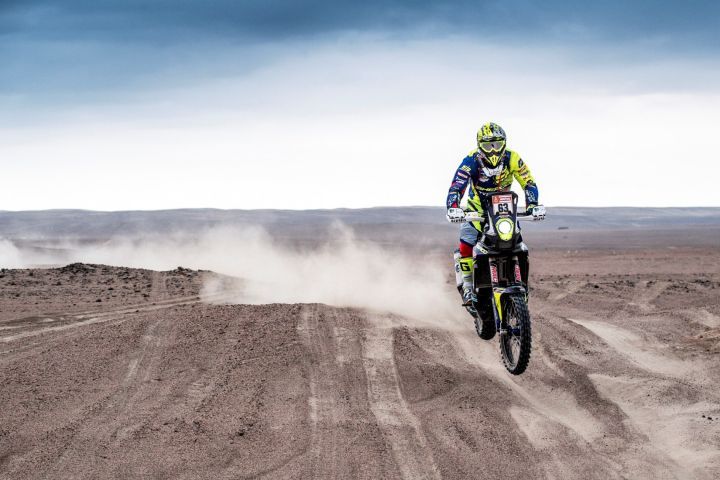 Stage four was just about survival. In fact, it was not only about bringing the bike home, but also bringing it back in a condition so that it's good to survive the following day’s action as well. And that is why the marathon stage is one of the most gruelling courses of the Dakar, because apart from the usual challenges, competitors have to tend to their machines at the end of the day as well.

At the end of the first half of the marathon stage, Hero’s Oriol Mena and Sherco-TVS’ Lorenzo Santolino are just a couple of spots shy of the top ten in the overall standings. Mena and Lorenzo have been strong throughout the rally and they have shown that they can take the fight to the likes of KTM, Honda and Yamaha. Lorenzo was the quicker of the two on the day at 10th spot, while Mena, at just 14 seconds off, was only a position below him.

The Metge brothers have also been putting together a string of good stage timings. Michael ended his day at 17th, while Adrien finished four places below his older brother. Adrien and Michael continue to be in the same positions overall, as they were on the previous day, i.e. 16th and 26th.

Riding through the slow pack was always going to be an uphill task for Hero’s Joaquim Rodrigues and CS Santosh as well as for the final Sherco-TVS pilot, KP Aravind. Apart from the usual navigational hazards, their challenges are compounded by the dust storm that the slow pack leaves behind. Moreover, with fast cars/trucks approaching them, the next few days will be decisive. Nevertheless, J-Rod and Santosh did well to finish 30th and 51st on the day, which sees them at 31st and 44th on the overall standings. Aravind looks to be on a more mature mission this year round with his sole objective to finish the rally and has dropped down a few spots again to 64th overall.

Leading the Moto class, HRC’s Ricky Brabec has not only taken stage victory, but also taken the overall lead back from Husqvarna. Brabec was being hunted down by the KTM trio of Matthias Walkner, Toby Price and Sam Sunderland. But the Honda man rose to the occasion and managed to fend off the challenge by storming through the final 100-150km stretch. In the same stretch, Yamaha’s Adrien van Beveren pipped Sunderland down a spot to claim fourth position in the stage.

With Brabec in the lead, Pablo Quintanilla is still in second spot with a gap of close to two minutes between the two. Quintanilla was 20 minutes off the Honda rider in the day and he should thank his stars he was not slower than that, which would have robbed him of a chance of victory contention. Behind these two is Toby Price and Sam Sunderland with van Beveren hot on their tail. Honda’s Kevin Benavides is sixth with Walkner in seventh, still not ready to relinquish his Dakar title so easily.

As far as cars are concerned, it is shaping up to be a proper showdown between two rally raid greats. Nasser Al-Attiyah aboard his Toyota Hilux has snatched yet another stage win from the Stephane Peterhansel's Mini. While it was too close to call, the Qatari driver’s ultimately won the stage by a margin of close to two minutes from the Dakar legend. The Minis of Jakub Przygonski and Nani Roma finished in third and fourth respectively, with Sebastien Loeb ending the day in fifth.

The situation looks similar at the top of the overall standings as well, with Al-Attiyah in the lead, followed by Peterhansel, almost nine minutes short of him. Roma leads the rest of the Mini brigade of Przygonski and Yazeed Al Rajhi. Loeb is 50 minutes off Nasser and has a slim chance of winning the rally from here.

With the rest day to follow soon, day five should be a hotly contested one, especially when you consider the mass start in store for us today. But what ailments are the competitors carrying from the previous stage and how it affects their performance today, remains to be seen.