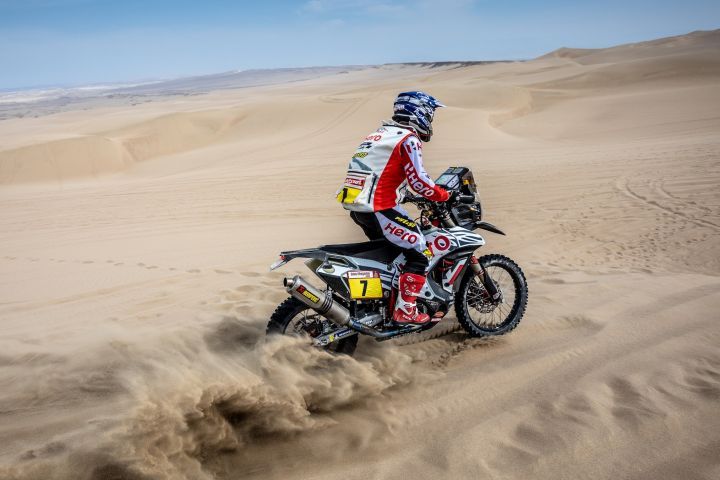 It all happens within a blink of an eye as there were some major takeaways from the third day of the 2019 Dakar. Let’s start with the great news as Hero’s Oriol Mena managed to break into the top ten over the course of 331km. His eighth spot on the day has helped him climb up the leaderboard to 12th overall. He is four minutes quicker than 13th-placed Sherco-TVS Racing’s Lorenzo Santolino. Lorenzo just missed out on a stage top ten, ending the day in eleventh, a great morale booster for the upcoming days.

However it is Lorenzo’s teammate Michael Metge who stole the show today. Michael was running strongly on the first day but he ran out of fuel midway through the second stage, sending him way down the field. However, the Frenchman managed the tenth fastest time on today’s stage, which has helped him climb up from 62nd to 26th spot.

His brother Adrien is ten spots above him in the overall standings as he too posted a strong 19th fastest time over the course of the stage. Aravind KP has much to cheer as the Indian lad has for the first time in his three-year Dakar stint managed to cross the finish line of day three. Aravind has also managed to improve his overall positioning in the rally, climbing up three spots to 58th.

However, it is a bit of a gloomy spell for Hero’s other two riders. Joaquim Rodrigues was a disappointing 46th as CS Santosh ended the day with a lowly 64th position. While this result has not hit J-Rod at all, the Portuguese rider now in 31st, it has affected Santosh badly. Santosh who was running in the top twenty on day 1 now finds himself 42nd. The root cause for this massive drop in results in stage 3 is a poorly marked waypoint which caught out even the top factory riders of KTM as well as Honda. J-Rod lost an hour in the process of finding this waypoint. For Santosh, he describes it as he found it to be inside a ravine and there he dropped the bike. Luckily for him, he was able to pick the bike up and get going again.

With navigation playing a major part of the chaos today, it was Yamaha’s Xavier de Soultrait who was fastest on two wheels at the end of the day’s proceedings. Soultrait was 15 seconds faster than Husqvarna’s Pablo Quintanilla. Honda’s Kevin Benavides managed to salvage something for the team by taking the third spot. Adrien van Beveren’s fourth place maintains his consistent string of positive results. It was a day to forget for KTM as their riders, Sam Sunderland, Toby Price, Matthias Walkner and Luciano Benavides, were not up to the mark. Sunderland was eight and a half minutes off the winner in fifth as Price brought his bike across in ninth spot. Luciano and Walkner were 14th and 15th, with a sizeable gap to the stage winner, Soultrait.

Honda too had their share of bad luck to contend with as it was the end of the road for stage 1 winner Joan Barreda Bort. Barreda managed to get his CRF450 Rally stuck in a sandy section which was 300m off the actual route. After two hours of unfruitful attempts to remove his stuck bike, he had to call it a day on his 2019 Dakar rally. Now that is two years in a row that he has failed to complete the Dakar, his third retirement in four years.

Who would have thought that it would be a Husqvarna leading the Dakar? But it is the case as leading the Moto class now is Quintanilla. He holds a commanding lead of 11 minutes 23 seconds over HRC’s Benavides. Less than a minute after is Sunderland, with van Beveren another minute off. Price finds himself in fifth while stage 3 victor Soultrait is now sixth. Ricky Brabec and Walkner are next on the list.

One can never discount Stephane Peterhansel as Mister Dakar himself romped away to his first stage victory of 2019 by a solid margin of 3 minutes 26 seconds. Peterhansel showed why he is the best Dakar athlete to date by managing to tame the dunes as well as sail through the field to take the day’s honours. In fact it was a great day for Mini drivers as they occupied five out of the top six spots, only the second spot taken by day 1 winner Nasser Al-Attiyah.

Nasser’s fellow Toyota buddy Giniel de Villiers had to see his stronghold over the lead disappear as a technical glitch saw him lose considerable time. Another one who saw his hopes of Dakar victory getting dashed was defending champ Carlos Sainz. The Spaniard smashed the front left wheel of his Mini and spent close to two hours fixing it. This means any chance of him retaining the title have disappeared. Even Sebastien Loeb had a rough day in the desert but not as bad as these two.

Nasser has reclaimed the top spot on the overall standings with a barrage of Minis right on his tail. Yazeed Al Rajhi trails Nasser by just 6 minutes 48 seconds, with Peterhansel a further 15 seconds behind. Nani Roma, Jakub Przygonski and Cyril Despres are in the mix too. Loeb is down in eight spot, 38 minutes off Al-Attiyah.

Tomorrow will be the longest competitive day in the 2019 Dakar as the racers will cover close to 405km. It is also the beginning of the marathon stage which means the participants have to take extra caution as they will not be meeting their service crews at the end of the day. So any repairs or fixing that need to be done has to be done by the pilots themselves.