Soon, James Bond won’t have to worry about encountering potholes while saving the world 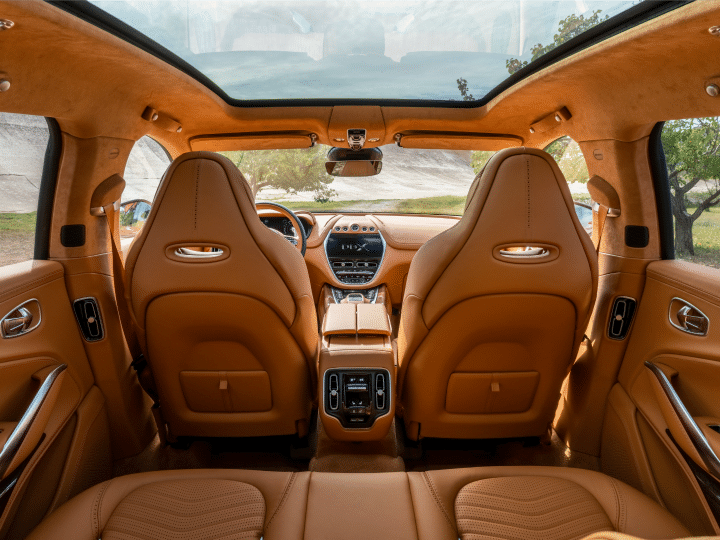 For the past twelve months, Aston Martin has been meticulously preparing the official debut of its first SUV, the DBX. We’ve seen the DBX being teased in various forums ranging from an appearance at the Goodwood Festival of Speed in a camo livery as well as spy shots of it undergoing tests at the Nurburgring. Just a month ago, the carmaker revealed that the SUV will pack a beefy turbocharged V8. And now, the carmaker has released a snippet of the DBX’s cabin apart from revealing that the SUV will make its debut in Beijing on November 20. It has also stated that the starting price of the SUV will be USD 189,900 (Rs 1.34 crore).

Unfortunately, Aston Martin has remained tight lipped about the details. However, the carmaker has revealed that a lot of work has been done to enhance driver and passenger comforts. The image reveals seats covered in what looks like perforated leather, as well as a panoramic glass roof and silver accents. Aston Martin has also suggested that the centre console will have plenty of storage space that could store items like a handbag or 1.5-litre water bottles.

The DBX will be the fourth car out of a total of seven that are set to be introduced under Aston Martin’s ‘Second Century Plan’. Recent images reveal the test mule in a camo livery with many fake panels to disguise its actual shape. It would be better to hold off on judgement until the production-spec model is finally unveiled.

Powering the DBX will be a 4.0-litre twin-turbo V8 sourced from Mercedes-AMG, producing 550PS of power and 700Nm of torque. With the most powerful V8 in Aston’s lineup, the upcoming SUV can exceed 180mph (290kmph) according to the carmaker. The V8 is the only motor confirmed for now, with a 5.2-litre twin-turbo V12 that powers the DBS Superleggera likely to join the DBX lineup later. It will be underpinned by a modified version of the DB11’s platform and also be the first-ever Aston to feature all-wheel-drive. A drift mode could also be offered for the SUV.

Expect further details to pour in at the official debut of the DBX on November 20. Bookings for the SUV will commence right after its unveil. Once launched, it will take on the likes of other high-end SUVs like the Bentley Bentayga, Lamborghini Urus and the upcoming Ferrari Purosangue.