Aston Martin DBS Superleggera James Bond Edition Is For The Inner Spy In You! 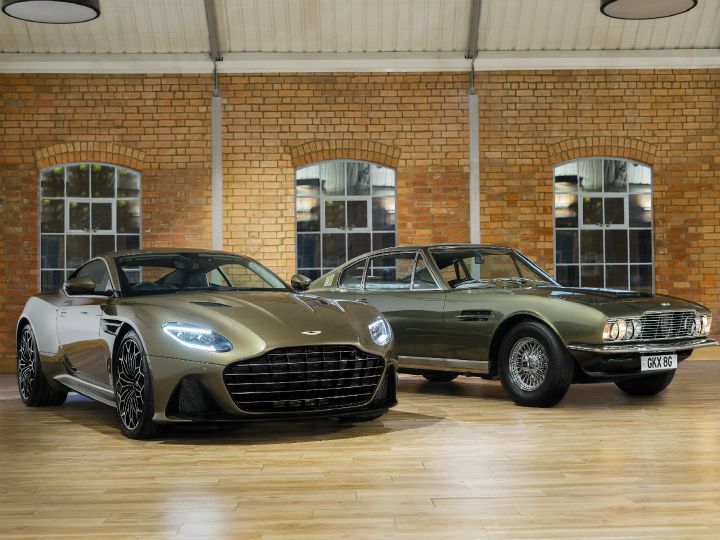 Aston Martin makes utterly  gorgeous supercars for the common folks and the badass British secret service agent 007. The iconic Aston Martin DB5 driven by Sean Connery is what creeps into our minds when someone mentions James Bond. But the lesser known fact is that the fictional spy drove a large variety of cars from Aston Martins to BMWs, Alfa Romeos and even a Toyota (not your average Corolla though). Out of all these cars, Aston Martins stood out for their sheer sex appeal.

It's been 50 years since the movie On Her Majesty's Secret Service (OHMS) was first screened. Sean Connery was replaced by George Lazenby and the DB5 with the DBS of the time. To commemorate the movie, Aston Martin has now unveiled a special edition DBS Superleggera. No, it doesn't pack the revolving license plate or the ejector seats, but it is one of the prettiest looking cars available on the planet today and sitting under the hood is the same 5.2-litre, twin-turbo V12 found in the regular DBS. This motor produces 715PS and 900Nm of torque.

The On Her Majesty’s Secret Service DBS Superleggera (quite a mouthful, isn’t it!) is limited to just 50 units and all of them will flaunt an Olive Green paint job like the original 1969 DBS Bond car.

The exterior gets plenty of carbon fibre, special badging and diamond-turned, forged alloy wheels, which is a work of art in its own right and something that can’t be explained with words. Drool-inducing and jaw-dropping design language of the wheels though, is not something that goes in hand with 007’s covert operations.

Apart from that, the grille is different from the standard DBS and similar to Bond’s ‘69 DBS. The cabin follows a similar theme with black leather combined with gray alcantara, red accents and special door sills with ‘007’ embossed to remind you that it's time to go save the world. The 50 selected owners can also opt for a bespoke drinks case that fits snug in the boot.

Aston Martin, in the past, has made two James Bond-inspired supercars, including the Goldfinger DB5 Continuation and the 2015 DB9 GT Bond Edition. The OHMS DBS Superleggera will go on sale later this year with a sticker price of  £300,007 (around Rs 2.6 crore, excluding taxes and import duties).

Also Read:
The DBS Superleggera Volante Is Aston Martin’s Fastest Convertible Ever
This Aston Martin Vantage AMR Is The One For Purists