The SUV is so wide that it could pass off as the Jeep Wrangler! 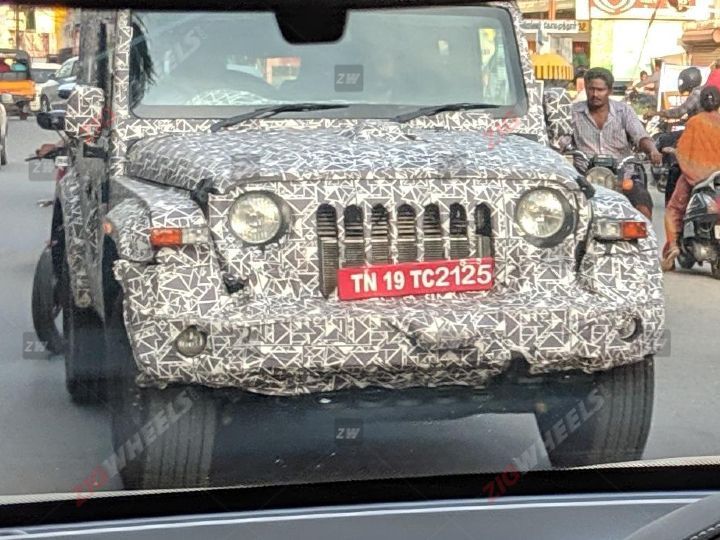 Mahindra is hard at work testing the upcoming 2020 Mahindra Thar and the burly SUV has been under the radar of automotive paparazzi for a while, revealing plenty of details. While we previously had previously brought you spy photos of the hardtop variant of the Thar, this time around the SUV was spied undergoing emission testing. It looks like Mahindra is testing the Thar with its own apparatus to ensure that the SUV passes upcoming BS6 emission norms.

The 2020 Thar is expected to be powered by a 2.0-litre BS6-complaint diesel engine. It is expected to produce around 140PS of power and 300Nm of torque, mated to a 6-speed gearbox. In comparison, the current SUV is powered by a 2.5-litre CRDe (106PS/247Nm) and 2.5-litre DI (64PS/195Nm) engine. While the carmaker has axed the DI engine in the Thar, the future of the 2.5-litre CRDe engine is yet unknown. The homegrown manufacturer has also started to work on upgrading its portfolio for the upcoming BS6-emission norms and you can read all about it here.

Based on the spy shots, the next-gen Thar has grown up in size and by the looks of it, the Thar has taken some serious inspiration from the Rs 60 lakh Jeep Wrangler. Mahindra has also kept the basic Jeep CJ-5 inspired looks of the SUV intact, which is no bad thing. You still get the iconic seven-slat grille, round headlamps and the flared wheel arches as seen on the current SUV. Also new on the upcoming SUV are round fog lamps on the bumper. The SUV spied here also featured a protrusion on the bonnet, which could hint that the manufacturer might install a scoop, just like the previous-gen Scorpio.

The next-gen Thar is expected to be underpinned by a brand new platform that will also be beefed up to meet the upcoming crash test and safety norms. It is also likely to get safety features like dual airbags, ABS with EBD, rear parking sensors, front occupants’ seatbelt reminder and high speed alert.

Features like a low-range gearbox and a locking rear differential are likely to be carried over to the new Thar to help it tackle the toughest of terrains.

Mahindra is expected to take the wraps off the upcoming Thar at the 2020 Auto Expo. When launched, it is likely to be priced above the current-gen SUV, which is priced from Rs 6.83 lakh to Rs 9.60 lakh (ex-showroom Delhi). Mahindra will also phase out the current-gen Thar soon and to bid farewell to it, the manufacturer will soon launch a limited edition called the 700 and as the name suggests, it will be limited to 700 units only.