The Upcoming Mahindra Thar Will Continue To Offer Top-Down Fun!

Unlike the hard-top Thar spied earlier, this recent spotting shows us a lower-spec variant with a soft top and steel wheels 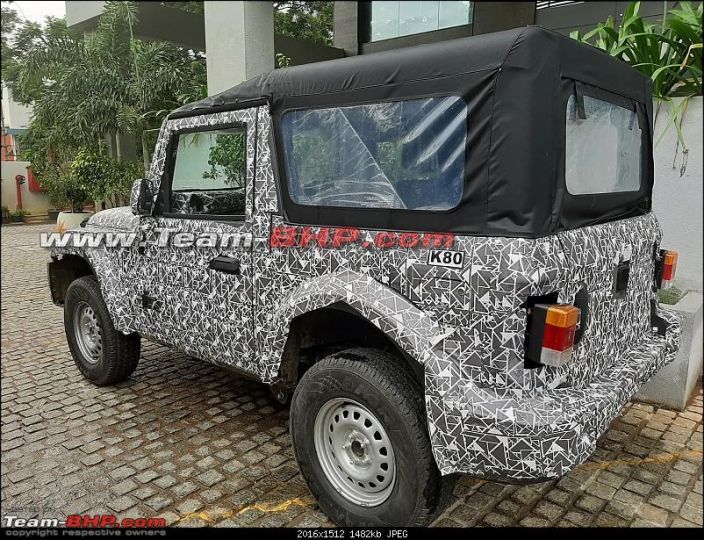 In a market devoid of affordable convertibles, a topless Thar has always been a refreshing sight to behold. The upcoming 2020 Mahindra Thar won't disappoint in this regard either, as it has been spied with a soft top, just a day after a new BS6-compliant XUV500 was spotted. The Thar has been spied multiple times in the past few months, but mostly with a flat hardtop. The SUV is expected to be unveiled at the Auto Expo 2020 and launched thereafter within months. It will be compliant with the latest safety and emission norms. Prices are expected to be higher than the Rs 9.99-lakh final edition Thar 700.

Pictures of the soft-top model present a raised-roof design not seen since police jeeps. The camouflaged Thar test mule was shod with 16-inch steel wheels, though the Thar has also been spotted sporting five-spoke alloy wheels. The raised roof slopes toward the windscreen, making the soft-top Thar look different in profile than the hard-top variant. It will also add a few millimetres to the overall height of the car. LED taillamps have been spotted previously, but the new spy shots show older units. The production model is expected to retain LED lamps.

The interiors of the 2020 Thar were again spied in the test mule, though the camouflage in this car veiled more of the dashboard than previously spied Thars. Even so, some details were clear and familiar, like the silver finish on the three-spoke steering wheel, chrome trim on the high and low-range gear levers, as well as the large plastic piece in the centre of the dash, which may house a touchscreen. On the spy vehicles, it has the space to fit a single-DIN audio console.

We expect to see the Thar in the Mahindra pavillion at the next Auto Expo. The SUV is likely to come with a 2.0-litre turbodiesel, which will be BS6 compliant. Safety features are likely to include dual airbags, ABS, EBD, rear parking sensors, speed alert system, as well as much-needed crumple zones and pedestrian protection. Features like these, as well as the new design and engine, can be expected to drive the price up from the previous Thar’s Rs 9.99 lakh.