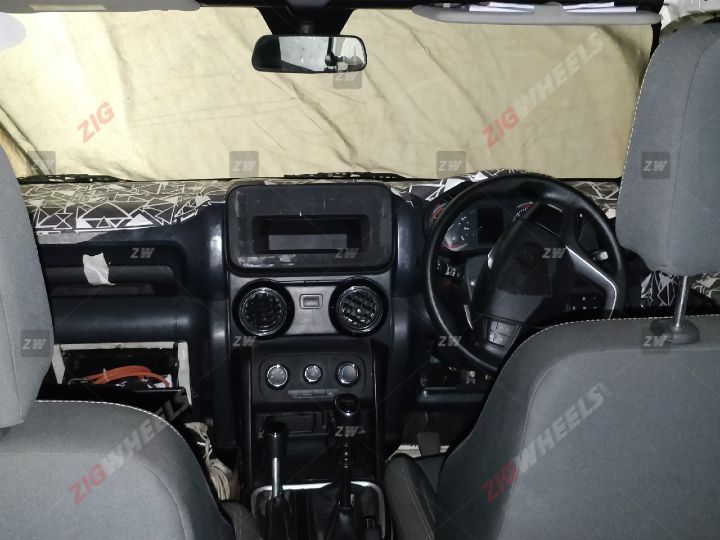 If you’ve been following the 2020 Mahindra Thar closely, you must’ve noticed that we have brought forth plenty of reports of the SUV, including it being spied during emission testing. This time around, we have another important news of the 2020 Thar which might make you excited. The interiors of the upcoming SUV have been spied and we now know what to expect from it.

The 2020 Thar pictured here features an all-black dashboard compared to the beige-black colour scheme found on the current SUV. The three-pod instrument console has been replaced by a new unit with a big MID taking position between the dials. On the centre console, the layout is more or less similar to the current-gen Thar with a provision for a new infotainment system now mounted higher up in the dash. Round AC vents and new AC controls are located below it. The grab handle on the passenger side seems to have been redesigned and is placed in front of an open storage space. The seats in the Thar are finished in black fabric with contrast white stitching. The Thar spied here also featured power window switches but the layout might not be final. Here’s a summary of the features based on the spyshots:

The 2020 Thar is expected to be powered by a 2.0-litre BS6-compliant diesel engine. Power and torque figures are expected to be in the range of 140PS and 300Nm. The spy shots also reveal that the Thar will continue to feature a four wheel drive transfer case but with a new 6-speed manual transmission. The auto-locking front hubs may be carried over while a new locking rear differential may be added to enhance the off-roader’s capabilities.

Under the skin, the Thar seems to be built on a different platform than before. It will meet upcoming safety and crash test norms. Safety features like dual airbags, ABS with EBD, rear parking sensors, front occupants’ seatbelt reminder and a high-speed alert will be offered as standard.

The Mahindra Thar is expected to debut at the 2020 Auto Expo. The current-gen Thar is priced at Rs 9.49 lakh (ex-showroom Delhi); expect prices to go up for the all-new model.

Status of the current-gen Thar:

Mahindra has discontinued the Thar Di variant as its body shell fails to meet crash test norms. The CRDe variant will also be discontinued soon, but Mahindra will launch a limited-run special edition called the Thar 700 as its last hurrah. Sources reveal that the Thar 700 gets cosmetic enhancements like a new aquamarine blue shade, alloy wheels and ‘Thar 700’ badge with Anand Mahindra’s signature on the fenders and leatherette seat covers. Finally, the Thar 700 will be slightly safer thanks to the addition of ABS.