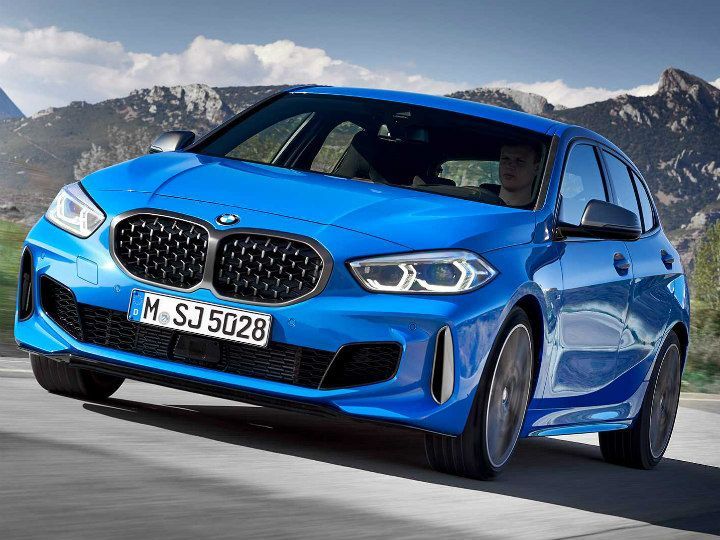 Rear wheel drive hatchbacks are a special but dying breed. Known for their dynamic abilities and fun-to-drive traits, these cars were praised for being distinct. The BMW 1 Series was no different with its rear wheel drive layout and famed Bavarian dynamics. But now, the third-gen 1 Series is here and it sends its power to the front wheels. It also gets a complete visual and mechanical overhaul. The hatchback is available in four variants :  Adventure Line, Luxury Line, Sport Line and M Sport.

The car has undergone a huge makeover with respect to styling. It continues to feature BMW’s kidney grille flanked by a new pair of headlamps and signature LED DRLs. Just like all other current-gen Beemers, the 1 Series’ grille has grown in size. The bumper looks sharp, with contrasting inserts and a large air dam. The same design ethos is carried over to the sides and the rear with a sweeping beltline and aggressive looking tail lamps and bumper design. The overall stance of the premium hatchback has now been transformed, the previous iteration had a long hood with a short rear similar to the ones seen on fastbacks.

The cabin too has received a major overhaul and is now in tune with bigger cars that roll out of Bavaria. The instrument cluster is now fully digital and is coupled to a 10.25-inch infotainment system. Other features include a panoramic roof, BMW digital key, personal assistant, wireless charging, ambient lighting, and a host of other assistance features.

Owing to its front wheel drive architecture, the 1 Series now has more interior space, with more knee room and shoulder room for the rear occupants than before. Boot space has also gone up by 20 litres as it now stands at 380 litres. The 1 Series also gets an electric tailgate for the first time.

Internationally, the 1 Series will be available with two petrol engines and three diesel engine options. However, BMW will not be offering any inline-six motors with the 1 Series. Instead, it has to make do with a choice of 4-cylinder and 3-cylinder engines with outputs ranging from 114PS to 306PS.

The top-spec 2.0-litre, 4-cylinder petrol engine is the most powerful engine on offer, making 306PS and 450Nm of torque. It comes mated to an 8-speed automatic transmission. Top speed is rated at 250kmph, with 0-100 kmph coming up in 4.8 seconds. The good news though is that this engine will come with an xDrive all-wheel drive system in the performance-oriented M135i variant. The 120d xDrive is the top-of-the-line diesel variant. It is powered by a 2.0-litre engine producing 188PS and 400Nm, paired to an 8-speed automatic that sends power to all four wheels.

BMW will showcase the all-new 1 Series in Munich, Germany during the  #NextGen event that is set to take place between June 25 and June 27. The German brand will also take the wraps off the much-awaited 8 Series Gran Coupe during the show. While the worldwide official launch of the 1 Series is slated for September 28, deliveries are set to begin by the end of this year. There’s no confirmation on whether it will make it to our shores or not. With the last gen model discontinued in India in 2017 due to lackluster sales, will the new 1 Series with it’s updated powertrains and features make sense in India now? Let us know in the comment section.

Recommended Read:
Aston Martin DBS Superleggera James Bond Edition Is For The Inner Spy In You!
Ferrari’s Upcoming Hybrid Supercar Spotted Ahead Of Its Launch