From tiny Kei cars to full-size MPVs and self-driving cars from the future, here’s what you should look out for at the Tokyo Motor Show, beginning October 23. 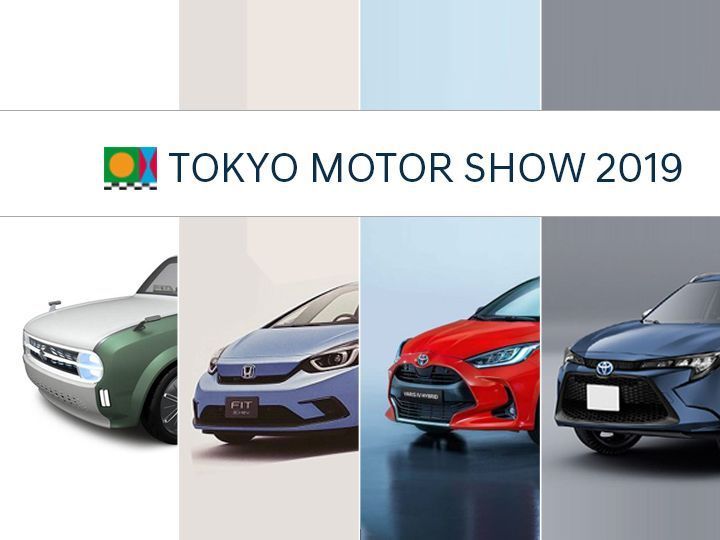 Over the years, the Tokyo Motor Show has not only given us a glimpse of the future of mobility but also some stunningly mad concepts that are never likely to see the light of day. The 46th edition, which is scheduled to be held between October 24 to November 4, promises to be bigger and madder than ever before and we at ZigWheels are excited to see what the future has in store for us. As we all know the Japanese are ahead of the game when it comes to innovations in the automotive world and thus, we expect a host of ground breaking concepts and production vehicles this time around. Without further ado, let’s take a quick peek at the list of all the models that are expected to put up a show:

The Honda Jazz, or the Fit as it’s known in some markets, is quite arguably the most anticipated car of this year’s Tokyo Motor Show. The fourth generation Jazz will pack a new hybrid powertrain, novel styling as well as a new platform. A leaked brochure has given us more insight, leading us to believe that the Jazz will come in four versions including a crossover variant called the Crosstar.

Other highlights include a dual-motor hybrid powertrain that is expected to be paired with a 1.2- or a 1.5-litre petrol engine. Also on the cards are a 1.0-litre 3-cylinder turbo-petrol capable of producing 125PS and a 1.5-litre turbo-petrol (could it be a Type-R?) good enough for 225PS. Expect the new Jazz to make its way into India by the end of 2020.

Japan’s set to its first taste of the updated 2020 Honda Accord at the upcoming show. Already on sale in various international markets, the new Accord gets a 1.5-litre turbo-petrol and a 2.0-litre hybrid-petrol engine options along with coupe-like styling and improved cabin space. The sedan is priced at around Rs 40 lakh in Thailand.

This super cute, all-electric hatchback gets minimalistic styling, lovable proportions and a water-cooled 35.5kWh battery that can charge upto 80 per cent in 30 minutes. There will be two states of tune on offer -- 136PS and 154PS. It also features an impressive 50:50 weight distribution with power being sent to the rear wheels. It’s got all the ingredients to make it a fun car while also returning close to 220km of range.This will be the first time Japan will get to see the car right after its global unveil at the Frankfurt Motor Show.

Suzuki’s main attraction at the Tokyo Motor Show will be this retro plug-in hybrid called the Waku, which translates to excitement in English. The concept will showcase Suzuki’s direction for the future of mobility and the carmaker refers to the Waku as a personal compact PHEV that can be transformed into different body styles. Expect more details to be revealed at the show

The Hanare takes a different approach to mobility and aims to make its occupants feel at home with a spacious cabin that can be equipped with tables, sofas, and a massive LED screen attached to one side. The Hanare also comes with Level 5 autonomous driving technology, making it a driverless vehicle. Ingress can only happen through one side, which opens up generously. Also interesting is that the Hanare’s headlights can double up as tail lights as well.

The Hustler Concept is a crossover kei car that has been on sale in Japan since 2004. Suzuki will be showcasing a new concept version of the same with some rugged styling bits. Currently, the Hustler features a 660cc 3-cylinder turbo -petrol good for 63PS.

Basically a rebadged version of the Daihatsu Rocky, the Rise might be of importance to our market owing to its 3.98 metre length. The compact 4x4 SUV will be powered by a 1.0-litre engine in international markets. That said, it remains to if Toyota showcases the Rise at the Tokyo Motor Show or unveil it at the Auto Expo in February next year.

Toyota has already revealed the new Yaris based on the TNGA platform. The hatchback sports a chic design along with a hybrid setup. Powertrain options include a 1.5-litre and a 1.0-litre engine. Furthermore, Toyota claims that the new Yaris will have impressive dynamic traits.

The GranAce is a mini MPV that will make its world premiere at the Tokyo Motor Show. It features a luxurious cabin and comes in two versions -- 6-seater or 8-seater. It is powered by a 2.8-litre diesel engine mated to a 6-speed automatic transmission.

The second-generation Mirai concept will go on sale by the end of 2020. The new Mirai promises to increase efficiency by 30 per cent while also carrying the baton for fuel cell electric vehicles (FCEV).

Toyota is expected to showcase the all-new GT86 that will retain its powertrain layout while bumping up the output figures. Details are scarce at the moment, but we hope to find some answers soon.

Already revealed, the Copen GR Sport is an adorable Kei sport car that we badly need. The GR in the name stands for Gazoo Racing, Toyota’s racing division which has tweaked the convertible with top-shelf parts and has a keen eye for detail. More details this way.

The LQ is a Level 4 autonomous self-driving vehicle with its main talking point being Yui, an AI-powered agent. Yui is capable of learning the driver’s emotional and physical state to control aspects of the car such as music, seat functions, air conditioning, and fragrances. There’s a lot going for the LQ, which seems to have descended from the future.

Toyota will also showcase the BEV, or  Battery Electric Vehicle (BEV) if you’re wondering. A short-distance, all-electric mobility solution focussed at elderly people, the BEV can offer a range of upto 100km and can reach speeds of upto 60kmph.

The new concept is a sneak peek into Lexus’ future of all-electric mobility. Toyota’s luxury wing has teased the car with an extremely short video that fails to reveal much about it.

Renault will be showcasing the latest iteration of the Clio (Lutecia in Japan) at the Tokyo Motor Show. The current Clio uses a host of engines ranging from 0.9-litre to a 1.5-litre diesel.

The French manufacturer will also be showcasing the compact Twingo hatchback. What makes the Twingo stand out from the crowd is its rear-engined, rear-wheel drive layout.

The Japanese have a thing for Kei cars and they are embracing the future with all-electric Kei cars. The IMk takes design inspiration from Japanese culture while supporting autonomous driving and a powerful powertrain setup, which is yet to be revealed.

Next up from Nissan is a long-range EV. Slated for production in 2021, the Ariya SUV is speculated to offer a maximum range of close to 500km. Further technicals details will be out soon.

Isuzu is expected to showcase the new and upmarket D-Max SUV. The lifestyle product gets extensive interior and exterior upgrades and a revised 3.0-litre engine good for 193PS.

The WRX STI EJ20 Final Edition will serve as the last hurrah to 30 years of Boxer engines. The high-performance sedan’s technical details will be revealed at the motor show while it will be a limited lottery sale as per Subaru.

Subaru will be showcasing the latest iteration of the Levorg station wagon which debuted in 2014. The car will feature a radical design language according to new leaks and is also speculated to be a near production-ready version than a concept.

A small electric SUV from Mitsubishi, the MI-Tech aims at offering driving pleasure along with all-terrain capabilities. Technical details include a 4-motor electric 4WD system combined with driver assistance systems.

Staying true to its name, the Super Height K-Wagon is an absurdly high compact car that features a roomy cabin and good performance. It also gets various driver assistance kit.

Packing a 35.5kWh battery, the MX 30’s electric motor can produce around 140PS and 264Nm of torque using a single-speed gearbox. It will be Mazda’s first zero emissions model with a claimed range of around 250km. Globally, the MX 30 will rival the Hyundai Kona Electric.

Apart from the MX 30, we also expect an announcement from Mazda regarding the revival of rotary engines. The Japanese manufacturer has been letting out hints about a possible revival and rotary fanatics all over are waiting for more developments on the same.

Mercedes is the only German manufacturer attending the 2019 Tokyo Motor Show this year. BMW and the entire Volkswagen Group have decided to give it a miss. But what Mercedes plans on showcasing at the show is still a question. Meanwhile, at the 2017 Tokyo Motor Show, Mercedes brought the Project One, EQA and smart vision EQ

The Japanese manufacturer will be showcasing four concept vehicles: IcoIco, TsumuTsumu, WaiWai, and WakuWaku. IcoIco is an autonomous  public transport vehicle while the TsumuTsumu is a compact truck that comes with a big cargo bed. WaiWai, on the other hand, is a mini-van with ample cabin room and WakuWaku is a mini-SUV.

The French manufacturer responsible for the brilliant A110 sports car is expected to showcase the more focussed A110S for Japanese markets at the Motor Show.